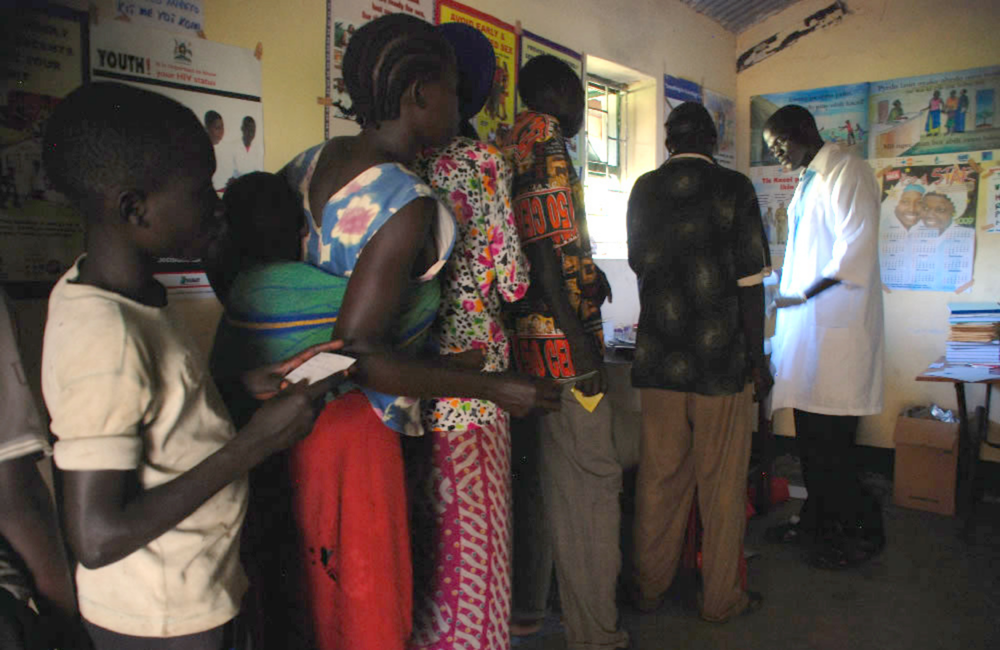 Villagers line up to get tested for HIV in a makeshift laboratory in Uganda. Victoria Holdsworth/Commonwealth Secretariat. Creative Commons licence

A study across sub-Saharan Africa has shown a huge improvement in knowledge of HIV status. Eighty four per cent of those living with HIV in sub-Saharan Africa were aware of their HIV status in 2020, compared to only 5.7% in 2000. Over half of the population had been tested for HIV at some point by 2020, compared to only 3.6% in 2000. In 2020, the average time until diagnosis was seven years shorter than in 2000, with a much higher likelihood of being tested within one year of infection.

However, there are still large variations in testing between different regions and less testing in men and those aged between 15-24. These findings by Dr Katia Giguère’s team published in May issue of The Lancet HIV suggest that these groups could be key targets for testing interventions in sub-Saharan Africa, where two-thirds of all people with HIV live.

Testing programmes in sub-Saharan Africa have been expanded since 2000, with the aim of reaching the target of 90% knowledge of status in people living with HIV by 2020. HIV testing is done in more healthcare facilities and is integrated into antenatal care. Access to testing has improved by introducing rapid tests, home tests and self-testing kits.

This is the first comprehensive study looking at the efficiency of HIV testing services across sub-Saharan Africa and trends in knowledge of status based on country, gender and age. Data was collected for people aged 15 and over, using national household surveys and information from HIV testing programmes. This was combined with a mathematical model of testing behaviours to determine knowledge of status in specific populations.

No adjustments were made for the possible impact of COVID-19 on service provision. This is significant as The Global Fund recently reported that in comparative months in 2019 and 2020, referrals for diagnosis and treatment fell by 37% and testing fell by 41% in 502 health facilities in 32 African and Asian countries. While this cannot be assumed to be representative of all facilities, it does raise concern over future access to services to maintain the improvements in HIV testing shown in Dr Giguère’s study.

Over 2.7 million people took part in the household surveys, across 40 different countries. In 2000, only 3.6% people in sub-Saharan Africa had ever been tested for HIV, which rose to 51% in 2020. Of people living with HIV only 5.7% were aware of their diagnosis in 2000, increasing to 84% by 2020, with 12 countries and the region of southern Africa achieving the 90% UNAIDS target. The median time from infection to diagnosis went from 9.6 to 2.6 years.

"The largest group of people left undiagnosed in terms of absolute numbers were men aged 35-49."

The probability of being tested within one year of infection increased more than tenfold from 2.6% to 33% and the chance of being tested before having a CD4 count of less than 350 rose from 19% to 71%.

The proportion of positive test results decreased from 9% to 2.8%, which would be expected as more people were taking HIV tests. Of those positive tests, the proportion of new diagnoses for HIV decreased from 89% to 42%, suggesting that people were testing again after having a positive test, which may be done for a multitude of reasons. Further research needs to be done as to how to encourage people to have confidence in their diagnosis and to remain engaged with care.

Not a single country reached the 90% UNAIDS target for people aged 15-24 years old and only six countries reached the target for men. The largest group of people left undiagnosed in terms of absolute numbers were men aged 35-49 – there are estimated to be around 700,000 undiagnosed men in this age group. Previously, many schemes have shown improved uptake of HIV testing by men, including door-to-door testing, partner notification services, home-based couples testing and workplace testing services.

In conclusion, the expansion of HIV testing programmes across sub-Saharan Africa has had a huge impact on the spread of HIV. However, there are still large disparities between knowledge of status in different regions of sub-Saharan Africa, different age groups and genders, which makes the new UNAIDS target of 95% knowledge of status by 2025 challenging to achieve, particularly with the new COVID-19 pandemic disrupting HIV testing services globally.

As the researchers point out: “Reaching this objective will require a better understanding of retesting patterns and a focus on addressing disparities among older men and young people in knowledge of status.”

Full image credit: HIV testing. Villagers line up to get tested for HIV in a makeshift laboratory in Uganda. Image by Victoria Holdsworth/Commonwealth Secretariat. Available at www.flickr.com/photos/comsec/3989910492 under Creative Commons licence CC BY-NC 2.0.

Advocates say that Ending the HIV Epidemic (EHE) initiative will likely fall short of its current goals not just because of the COVID lag or steps the feds are not taking, but because funding within EHE doesn’t fully reflect the scope of need of people living with or at risk for HIV.
TheBody
7 Feb 23
HIV testing programmes & uptake