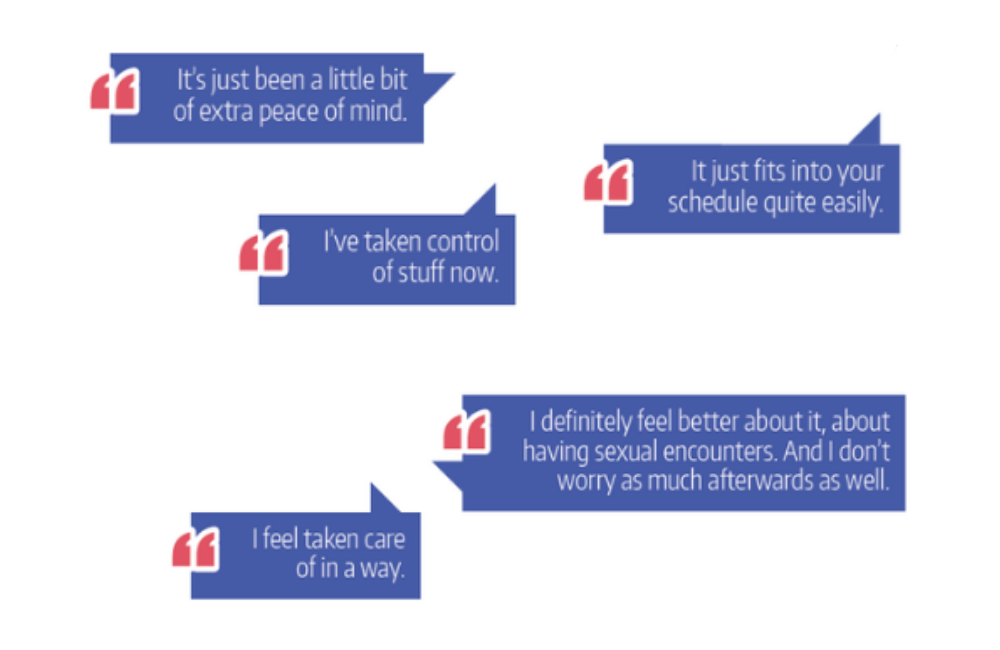 Quotes from the Implementation of HIV PrEP in Scotland infographic.

The recent report on the first year of the implementation of  pre-exposure prophylaxis (PrEP) through the National Health Service (NHS) in Scotland concludes: “Year one has been a resounding success in terms of establishing a new nationwide service – the first of its type in the UK and one of the first worldwide.”

In total, 1872 people were prescribed PrEP in Scotland during the first year of the programme. If the same proportion of England's population had been prescribed PrEP, this would amount to over 19,000 people.

Between one and four were infected with HIV after being prescribed PrEP. The uncertainty is about the exact date of HIV infection; what is known is that none of the people concerned had preventative drug levels in their blood around the time of infection.

Because the majority of people had only taken PrEP for a few months before July 2018, when the last data in the report was collected, it is difficult to calculate an accurate reduction in HIV incidence, but the data suggest that people prescribed PrEP were up to 75% less likely to become infected with HIV than those not receiving it.

The Health Protection Scotland report says that this was achieved despite several factors that might have acted as barriers:

The introduction of PrEP necessitated administrative and structural changes, such as new IT systems and coding introduced into the sexual health surveillance system, and mechanisms for the reimbursement of costs from patients who attended clinics out of their area of residence, including England. New patient education materials also had to be developed.

The success of the programme. Health Protection Scotland says, “exceeded expectations” and was partly due to a decision to involve all stakeholders in multidisciplinary teams throughout the process – including third sector organisations, community activists, service providers, politicians, NHS administrators, and external experts, including physicians and advocates who at the time were supporting generic PrEP users in England.

It may be reassuring that a relatively low number of people (274, or 11% with PrEP as a reason for attendance) came to a clinic seeking PrEP but were judged to be ineligible, showing that doctors were not prescribing PrEP to the “worried low-risk”.

On the other hand, virtually all people prescribed PrEP were gay or bisexual men, with only 14 people identifying as female, and nine as heterosexual men – between them only 1.2% of PrEP users, or less than half the proportion of non-gay participants in the English IMPACT rollout trial. The Scottish report acknowledges that “more needs to be done to raise PrEP awareness among women, transgender people and heterosexual men” and vows to conduct research into how best to address their needs.

The majority of people prescribed PrEP (56%) were aged 20-35, but one in seven were aged over 50, and this age group was particularly well represented among the earliest adopters. Seventy (3.7%) PrEP users were aged under 20.

There was immediate interest in PrEP as soon as it was offered in July 2017, with the peak month for new prescriptions being October, with 211 new PrEP users. After this, new prescriptions declined, to about 125 a month by June 2018, though the month with the largest number of total prescriptions was May 218, with 519. Scotland offered patients the choice of daily or ‘event-based’ PrEP; 74% chose daily PrEP and 17% event-based PrEP, with the other 9% switching from one to the other during the year (slightly more from daily to event-based than the other way round).

One significant and unexpected finding was that a high proportion of PrEP seekers were people who were either attending a sexual health clinic for the first time ever (19%) or had not attended for at least two years (11%). A lot of the older gay men were in this category.

Only 2% of those prescribed PrEP during the year (45 people) were reported as having stopped it. This of course does not reflect the true figure as the majority of people who stopped would simply not have returned, rather than telling their clinic. If every single person prescribed PrEP during the year had taken daily PrEP and refilled their prescriptions every month, the number of repeat prescriptions would have been at least double the 4432 actually seen, but adherence would never realistically be this high.

As expected, the influx of people coming forward for PrEP resulted in a considerable increase in both HIV and STI tests in sexual health clinics. HIV testing was on an upward trajectory anyway – in gay and bisexual men coming to STI clinics, the number of tests per quarter had increased from 1920 in mid-2014 to 3250 at the time PrEP started in July 2017. It increased further to 4150 tests in June 2018.

In patients who were prescribed PrEP, the increase was much steeper. Looking back, about 250 of these 1872 people had taken an HIV test in the second quarter of 2014; 750 took a test in the quarter PrEP started (July-Sept 2017); and 1450 – 35% of all gay and bisexual men testing at STI clinics – in the quarter that included June 2018. The cumulative number of HIV tests among PrEP users was one of the additional burdens clinics had to shoulder.

The decrease in gay HIV diagnoses is almost certainly not due to PrEP, or not yet. Up till mid-2016 HIV diagnoses in MSM at STI clinics were running at about 80 a year. During the following year – the one before PrEP became widely available – they abruptly fell to 47, and were 43 in the year after PrEP was started. Cases of recent HIV infection – acquired less than six months before testing – fell similarly from about 30 a year before July 2016 to 17 in 2016-7 and 19 in 2017-8.

This decrease seems to mirror ones seen in England around the same time and have been similarly ascribed to increases in HIV testing and the proportion of people on antiretroviral therapy who are virally supressed.

The number of tests for STIs more or less mirrored HIV tests and increased at the same higher rate in people who took PrEP or who would go on to take PrEP.

The increases were much larger in men taking PrEP or who would go on to take it, from 85 a quarter at the start of PrEP being available to 160 a quarter in the last quarter of 2017.

This looks like a big increase in gonorrhoea in men taking PrEP, but is almost entirely due to more testing. The proportion of men taking STI tests who were diagnosed with gonorrhoea was 8.05% during July 2016-June 2017 in men who never used PrEP, and 10.9% in men who went on to use PrEP the following year. That following year, the rate was 7.25% in men not taking PrEP and 11.9% in men taking it. The difference between PrEP users and non-users is statistically significant but the year-to-year changes are not.

The first year of PrEP was not achieved without difficulties, both expected and unexpected. The July 2017 start coincided with the human papillomavirus (HPV) vaccine being introduced to gay men under 45, so clinics had a double burden of new prescriptions. This led to many patients needing far longer appointments than usual. Some clinics solved this problem by introducing pre-assessment interviews by nurses that collected behavioural data, with doctors called in only to give test results, prescribe PrEP if needed, and explain dosing and adherence.

At first, disproportionate concerns among some staff about PrEP side-effects and drug interactions persisted despite training, but these subsided as staff got more experience with PrEP users and with interpreting lab results. Some doctors struggled with patients who had complex eligibility issues, but these were solved by doctors setting up “professional peer support systems” such as so-called virtual clinics. On the other hand, fewer people than expected travelled up from England or elsewhere to get Scottish PrEP.

When PrEP started, only branded Truvada was available at a cost of £355 for 30 days, but the commissioners decided to buy generic medications at a tenth of the price. These became available by October, even though “this was subject to legal challenge.” Another cost-saving and efficacy measure adopted was to issue PrEP to patients on the day of their initial assessment, as in England. The report says “occasional” patients turned out to have acute HIV on that day and had to be recalled, but does not say how many.

It is difficult yet to say if PrEP has produced any further reduction in HIV infections at a population level. There was a decrease in the proportion of HIV testers testing positive in July 2017-June 2018 compared to the previous 12 months, from 0.4% of all testers to 0.3%, but no decrease in people who had acquired HIV recently. The “between one to four” people who caught HIV despite being prescribed PrEP would indicate an overall annual HIV incidence among all PrEP takers of 0.1% to 0.4%, indicating a group-level effectiveness of up to 75%, but PrEP is still too new for any population effects to be observable.