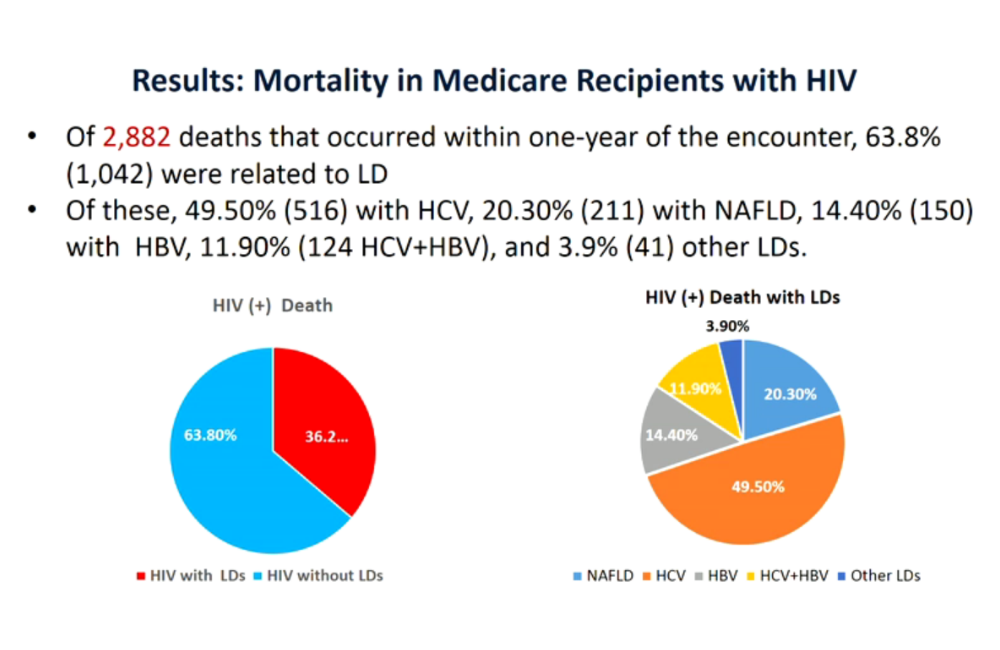 Slide from the study presented by Zobair Younossi at The International Liver Congress. Image from the EASL livestream.

Now that hepatitis C can be successfully treated, non-alcoholic fatty liver disease (NAFLD) is becoming an increasingly important cause of serious liver problems and liver-related death among people living with HIV in the US, according to a report at the EASL International Liver Congress this month in Vienna.

Dr Zobair Younossi of Inova Fairfax Medical Campus in Falls Church, Virginia, who presented the findings at a press conference, said that given the increasing impact of fatty liver disease among people with HIV, “clinicians must be vigilant in identifying and managing NAFLD in these individuals."

As people with HIV are living longer thanks to effective antiretroviral treatment, non-HIV-related conditions such as cardiovascular disease, non-AIDS cancers and liver disease account for a rising proportion of illness and death in this population. As HIV-positive people become healthier, they are also more likely to be overweight, Younossi noted.

Non-alcoholic fatty liver disease and its more severe form, non-alcoholic steatohepatitis (NASH), are characterised by the accumulation of fat in the liver. This triggers inflammation, which over time can lead to the development of fibrosis, cirrhosis and liver cancer. There are currently no effective treatments for NAFLD and NASH, and management relies on lifestyle changes such as weight loss and exercise.

Many people living with HIV also have hepatitis B virus (HBV) or hepatitis C virus (HCV). An effective HBV vaccine has been available since the late 1980s, antiviral medications like tenofovir disoproxil fumarate (Viread) and entecavir (Baraclude) can keep hepatitis B under control and hepatitis C can now be cured with direct-acting antivirals. Among HIV-positive people in the US – like that country's population as a whole – viral hepatitis is falling as a cause of serious liver disease while NAFLD is rising.

Younossi and colleagues looked at the prevalence and mortality trends of NAFLD, viral hepatitis and other liver diseases among HIV-positive people receiving Medicare, which generally is available to those age 65 or older and some younger people with disabilities.

In a multivariate analysis that took multiple risk factors into account, HIV-positive people with liver disease had longer hospital stays, higher inpatient and outpatient costs, and a higher risk of dying within a year compared to those without liver disease.

A related study at the conference looked at NAFLD in two cohorts of people living with HIV in Canada and Italy who did not drink to excess and did not have hepatitis B or C. Among 1228 people whose records were reviewed, 31.8% had NAFLD. Of these, 25.2% were considered at risk for liver disease progression based on elevated ALT levels or the presence of significant fibrosis.

"These studies indicate the changing profile of liver disease in patients with HIV. Whilst viral hepatitis is still the major cause of liver disease in such groups, NAFLD is becoming a much commoner problem," EASL vice secretary Prof Philip Newsome of the University of Birmingham said in a conference press release. "This reinforces the need to study therapeutic agents in patients with NAFLD and HIV, an area which is seldom examined."