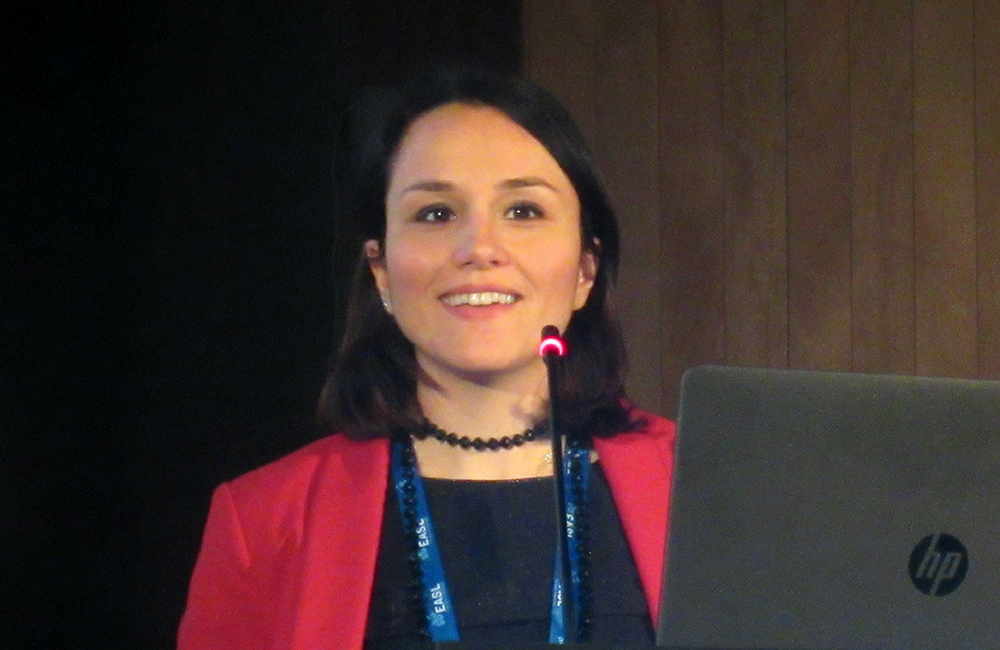 Chiara Mazzarelli, one of the study researchers, at The International Liver Congress, 2018. Photo by Liz Highleyman.

There has been a steep fall in the number of hepatitis C virus (HCV)-related liver transplants since the introduction of direct-acting antivirals (DAAs), according to European research presented to the 2018 International Liver Congress in Paris. The decline was especially evident in people with HCV-related decompensated cirrhosis. Survival among people with HCV receiving a new liver also improved dramatically.

“While the number of LTs [liver transplants] performed in Europe over the last decade has remained stable, the percentage of LTs in patients with HCV infection has almost halved since 2014, the increase being most evident in HCV-DC [decompensated cirrhosis] than in HCV-HCC [hepatocellular carcinoma],” comment the researchers. “In absolute terms, this means that approximately 315 fewer transplants were performed in HCV patients across Europe in the first semester of 2017 when compared with the first semester of 2014.”

A fifth of candidates for liver transplant in Europe have chronic HCV infection as the reason. Historically, people with HCV receiving a new liver have had poor survival rates, mainly due to the inadequacy of interferon-based HCV therapy.

DAAs have revolutionised the treatment and prognosis of people with HCV. An international team of investigators therefore wanted to see if the availability of DAAs had led to a decline in the proportion of liver transplants related to HCV and if DAAs had improved survival of people after a liver transplant.

The study was based on data from the European Liver Transplant Registry (ELTR). A total of 36,382 individuals had a liver transplant between January 2007 and June 2017 due to HCV, hepatitis B virus (HBV), alcohol and non-alcoholic steatohepatitis (NASH).

Transplant and survival rates were compared between the years when HCV therapy was based on interferon and pegylated interferon (2007-2010) and the DAA era (2014-2017).

The total number of liver transplants performed in Europe remained stable over the ten years of the study. However, the percentage of transplants related to HCV fell significantly (p < 0.001) from 23% in the interferon era to 11% in the DAA era.

Three-year survival in people with HCV-related decompensated cirrhosis increased from 65% in the interferon era to 77% in the DAA era (p < 0.001). HCV recurrence as the cause of death fell from 6% in the period when HCV therapy was based on interferons to 1% in the DAA era (p < 0.001). A comparable trend was observed in people with HCV-related HCC, with post-transplant recurrence of HCV as a cause of death declining from 6% to less than 1% (p < 0.001).

The post-transplant survival gap between people with HCV and individuals requiring a liver transplant due to other causes disappeared in the DAA era.

“Survival of LT recipients with HCV-related liver disease has dramatically improved over the last three years, being currently comparable to the survival of recipients with HBV infection,” conclude the authors. “These results are most likely the direct consequence of the availability of new DAAs.”

Perricone G et al. Impact of DAA in liver transplantation: major effects on the evolution of the indications and results. A study based on ELTR registry. The International Liver Congress, Paris, abstract LBP-021, 2018. Journal of Hepatology 68: S116, 2018.