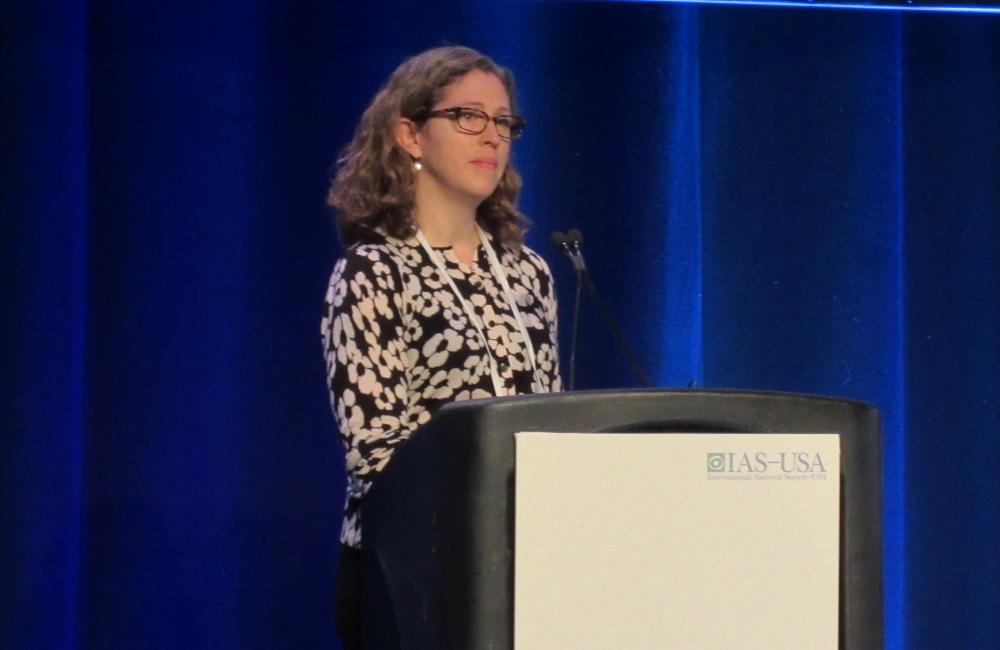 VRC01, a broadly neutralising antibody targeting HIV's CD4 binding site, was able to modestly delay the return of viral replication following interruption of antiretroviral therapy (ART), according to a study presented at the recent Conference on Retroviruses and Opportunistic Infections (CROI 2016) in Boston. VRC01 did not maintain viral suppression on its own, but it may play a role in combination therapy for HIV treatment or a functional cure.

Studies of antibodies for HIV prevention and treatment have mostly been disappointing because the virus is highly variable. The recent discovery of a number of broadly neutralising monoclonal antibodies, or bNAbs, that can target multiple HIV strains has given new impetus to this line of research. Antibodies for HIV prevention or treatment was the topic of a plenary lecture by John Mascola as well as a talk at the Community HIV Cure Research Workshop preceding CROI. (See this overview of those presentations.)

Katharine Bar of the University of Pennsylvania and fellow investigators with the AIDS Clinical Trials Group A5340 team evaluated whether one of the most promising bNAbs, known as VRC01, could delay or prevent the return of HIV vireamia after ART interruption.

VRC01 attaches to the CD4 binding site of HIV's envelope protein, preventing the virus from binding to the CD4 surface receptor that it uses to gain entry to T-cells. The CD4 binding site is conserved, or consistent across HIV strains, and VRC01 neutralises around 90% of diverse viral isolates from multiple clades in laboratory studies.

This open-label study looked at the safety, tolerability, pharmacokinetics and antiviral activity of VRC01 in HIV-positive people with suppressed viral load (< 50 copies/ml) for more than six months on an ART regimen containing a protease inhibitor or integrase inhibitor.

The study enrolled 14 participants. All were men, half were African  American and the median age was 38 years. They had well-preserved immune function with a median CD4 count of approximately 900 cells/mm3 and a CD nadir (lowest-ever level) above 200. They had been on ART for a median of 4.7 years.

Participants received intravenous (IV) infusions of 40mg/kg VRC01 every three weeks for three doses. They started a carefully monitored analytical treatment interruption one week after the first infusion. ART was restarted if their viral load rose to > 1000 copies/ml or their CD4 count fell below 350 cells/mm3. One patient stopped ART before the first VRC01 dose and was excluded from the efficacy analysis.

VRC01 was generally safe and well-tolerated, with no grade 3 or 4 (severe) adverse events, nor any grade 2 (moderate) events considered related to VRC01.

However, viral rebound was delayed compared to the time it took for virus to return in people who stopped non-NNRTI ART regimens in prior ACTG studies. At four weeks after the treatment interruption, 38% of VRC01 recipients maintained viral suppression compared to 13% of historical control subjects, a significant difference. At eight weeks, 8% of VRC01 recipients still maintained viral suppression compared to 3% of historical controls, which was no longer significant.

Time to viral rebound was not associated with VRC01 level, age, baseline or nadir CD4 count, or duration of ART.

Genetic sequencing of rebounding virus suggested that in some cases VRC01 restricted clonality (number of different strains) and in other cases it selected for pre-existing VRC01-resistant variants in the viral reservoir.

"The passive immunization of VRC01 is safe and well tolerated, modestly delays the return of viremia when compared to historical controls, but does not maintain viral suppression in the majority of patients," the researchers concluded.

Tae-Wook Chun and colleagues with the US National Institute of Allergy and Infectious Diseases conducted a similar exploratory trial looking at the effect of VRC01 on plasma viral rebound following discontinuation of ART in people who started treatment during chronic HIV infection and had viral suppression for more than three years.

The 10 participants in this open-label study had been on ART for an average of 10.6 years and had mean CD4 and CD8 counts of 796 and 768 cells/mm3, respectively. They received infusions of 40mg/kg VRC01 at three days prior to ART interruption, again at 14 and 28 days following interruption, and monthly thereafter for up to six months.

Multiple infusions of VRC01 were safe and well-tolerated. All 10 participants experienced viral rebound between 11 and 86 days (media 39 days) following treatment interruption, and nine restarted ART. VRC01 levels were high (142-583 mcg/ml) at the time of viral rebound. Several patients had evidence of VRC01-resistent virus prior to antibody infusion.

"While multiple infusions of VRC01 were safe and well-tolerated, the majority of patients experienced plasma viral rebound despite adequate levels of antibody in plasma," the researchers concluded. "Therefore, therapeutic strategies involving passive transfer of bNAbs may require a combination(s) of antibodies and/or resistance pre-screening in order to achieve sustained virologic control in HIV-infected individuals upon withdrawal of ART."