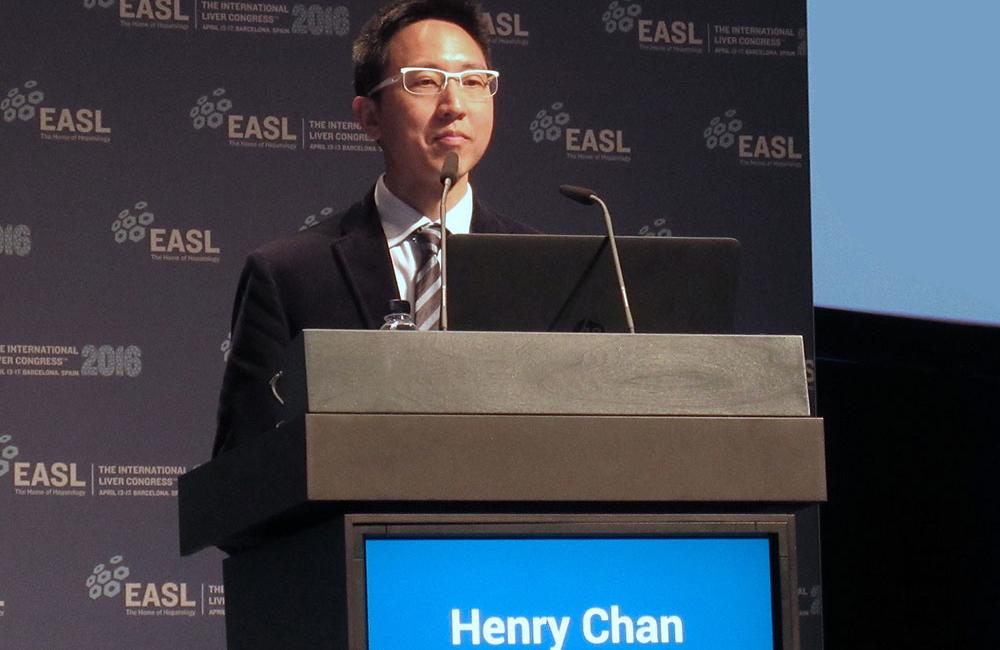 The new tenofovir alafenamide (TAF) pro-drug is as potent against hepatitis B virus (HBV) as the current tenofovir disoproxil fumarate (TDF) formulation, but with fewer detrimental effects on bone and kidney biomarkers, according to a pair of studies presented at the International Liver Congress last week in Barcelona.

Gilead Science’s tenofovir disoproxil fumarate (Viread) is one of the most effective antiviral drugs for hepatitis B and one of the most widely used antiretrovirals for HIV. It is generally considered safe and well tolerated, but it can cause a small amount of bone loss soon after starting therapy and can lead to kidney problems in susceptible people.

Nucleoside/nucleotide analogues like tenofovir can effectively suppress HBV replication during treatment, but they usually do not lead to a cure – as indicated by hepatitis B surface antigen (HBsAg) loss and development of anti-HBs antibodies – so long-term therapy is generally needed.

TAF is a new pro-drug formulation that produces high levels of the active drug (tenofovir diphosphate) in hepatocytes and CD4 T-cells with smaller doses than TDF, which means lower concentrations in the blood and less drug exposure for the kidneys, bones, and other organs and tissues.

In November 2015, the US Food and Drug Administration (FDA) approved Genvoya, the first combination pill containing TAF for the treatment of HIV; two other TAF co-formulations, Odefsey and Descovy, have since been approved. In addition, TAF is being developed as a stand-alone drug for hepatitis B treatment.

The HBeAg-negative trial (Study 108) enrolled 425 participants; 61% were men, about 70% were Asian and the average age was 45 years. About 20% had previously been treated for hepatitis B. Most had HBV genotypes B, C or D (21, 40 and 32%, respectively in the TAF arm. The mean HBV DNA level was approximately 5.7 log10, with nearly 20% having 7 log10 or greater. Participants had alanine aminotransferase (ALT) levels within twice the upper limit of normal, with a median of 67 U/l. About 12% had a FibroTest score suggesting liver cirrhosis.

Participants in both studies were randomly assigned to receive 25mg TAF or 300mg TDF once daily. Profs Buti and Chan reported the proportion of people with undetectable HBV DNA (<29 IU/ml) at week 48, the primary endpoint. The randomised studies will continue through 96 weeks, at which point everyone will receive open-label TAF.

At 48 weeks, most participants in both studies remained on their allocated medication, with just 4 to 5% discontinuing treatment.

In Study 108, a similar proportion of patients in both study arms – 94% of TAF recipients and 93% of TDF recipients – had undetectable HBV DNA at 48 weeks, showing that TAF was non-inferior to TDF. Only 2% of people in the TAF arm and 3% in the TDF arm had virological failure, with the remaining non-responders either missing data or discontinuing early. Among the few participants who received viral sequencing, no drug resistance was detected in either group.

Among the more difficult-to-treat participants in Study 110, 64% of TAF recipients and 67% of TDF recipients had undetectable HBV DNA at 48 weeks, again demonstrating non-inferiority. About 30% of patients in both arms experienced virological failure. More people underwent sequencing in this study, but again no resistance was detected in either arm.

ALT levels normalised in both treatment arms. In Study 108 significantly more people in the TAF compared to the TDF arm reached normal ALT – 50 vs 32% – when using American Association for the Study of Liver Diseases criteria (<30 U/l for men and 19 U/l for women). In Study 110, ALT normalisation also occurred more often in the TAF arm – 45 vs 36% –but here the difference did not reach statistical significance.

Both TAF and TDF were generally safe and well tolerated in both studies, and adverse events were comparable overall. There were few serious adverse events in either study (4 to 6%) and just 1% of participants discontinued treatment due to adverse events.

Turning to kidney markers, serum creatinine changes were small in all arms and confirmed renal events were rare (generally <1%). However, in both studies estimated GFR – a measure of the kidneys’ filtering capacity – fell significantly less in the TAF compared to the TDF arms (-1.4 vs -4.7 in Study 108 and -0.3 vs -4.7 in Study 110). Markers of tubular proteinuria (protein in the urine) were minimal in the TAF arms, and smaller than those in the TDF arms.

More people had elevated LDL cholesterol levels in the TAF arms (4 to 5%) compared with the TDF arms (<1%). Prof. Chan noted that higher LDL levels in TAF recipients are expected because TAF does not exert as much of a cholesterol-lowering effect as TDF. Prof. Buti said these slight increases likely would have no clinical consequences.

Investigators with both studies reached the same conclusion: in treatment-naive and previously treated people with HBeAg-negative and HBeAg-positive chronic hepatitis B, treatment with TAF for 48 weeks demonstrated non-inferior virological efficacy compared with TDF, higher rates of ALT normalisation and no development of resistance, with significantly less bone loss and less change in markers of kidney function.

Both presenters were asked the same question about whether these findings suggest that people on long-term hepatitis B treatment should switch from the older form of tenofovir to tenofovir alafenamide.

"For some patients, especially those who are older and have co-morbidities, I think [TAF is] a good option," said Prof. Buti, noting that further study is needed for hepatitis B but TAF's advantages have been proven for HIV treatment.

"There’s no big safety issue with TDF," Prof. Chan concurred, but based on more sensitive markers, "in the long run if patients require long-term therapy, I think TAF is a safer option."