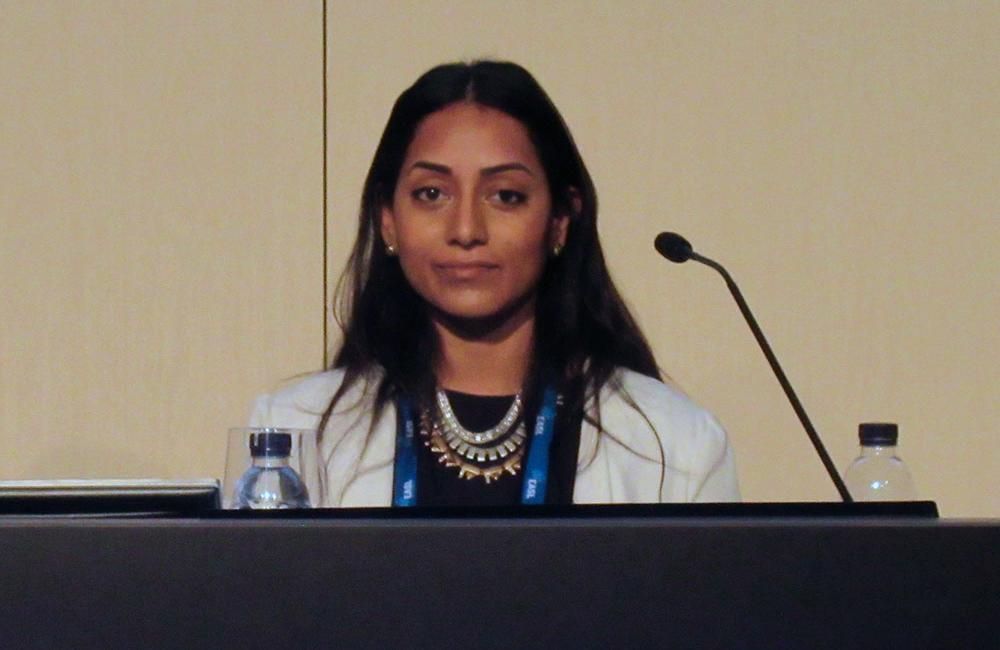 Sarah Kattakuzhy of the University of Maryland presenting at ILC 2016. Photo by Liz Highleyman, hivandhepatitis.com

Hepatitis C treatment managed by non-specialists such as primary care physicians and nurse practitioners is as safe and effective as treatment delivered by specialists and could help increase the number of people receiving therapy, according to findings from the ASCEND study presented at the 2016 International Liver Congress this week in Barcelona.

The advent of direct-acting antivirals (DAAs) used in interferon-free regimens has made chronic hepatitis C treatment simpler, shorter, more tolerable and much more effective. While interferon-based therapy required expertise to determine who needs treatment for progressive liver disease and when to discontinue futile therapy, treatment with DAAs is more straightforward and can potentially be managed by a wider variety of providers.

The latest EASL guidelines and AASLD/IDSA guidelines recommend that everyone with chronic hepatitis C should be considered for treatment rather than waiting until they develop advanced liver disease, making eradication of hepatitis C virus (HCV) an achievable goal. But challenges remain, including the high cost of therapy and the lack of enough specialists to treat everyone living with the disease.

Sarah Kattakuzhy of the University of Maryland and colleagues conducted the ASCEND trial to evaluate the safety and effectiveness of task shifting of hepatitis C treatment to community-based non-specialist providers.

"Currently, the limited availability of experienced specialists restricts rapid expansion of hepatitis C treatment, compromising the goal of global eradication," Kattakuzhy said. "As such, care models which bypass this therapeutic bottleneck must be explored."

This open-label, phase 4 trial enrolled 600 people with chronic hepatitis C at two urban community health centres in Washington, DC, who started treatment between May and November 2015.

About 70% were men, almost all (96%) were black and the average age was approximately 59 years. Nearly a quarter had HIV co-infection. A majority (72%) had hard-to-treat HCV genotype 1a (the rest had 1b), 18% were hepatitis C treatment-experienced and 20% had compensated liver cirrhosis. Patient characteristics were comparable across provider assignments.

A total of 16 providers participated in the study: six hepatologist or infectious disease specialists, five primary care physicians and five nurse practitioners. Patients were allocated in a non-randomised manner to receive treatment from the specialists (n = 294), primary care doctors (n = 156) or nurses (n = 150). All providers underwent the same three-hour training on the AASLD/IDSA guidelines.

All patients were treated with sofosbuvir/ledipasvir (the drugs in Harvoni) according to US Food and Drug Administration (FDA) label directions. Most patients (90%) were treated for 12 weeks; although more than 300 met the label criteria for 8 weeks of therapy, only 29 received this shorter duration.

Overall, 71 patients discontinued treatment early, mostly due to loss to follow-up (53 people). Seven stopped due to adverse events, five due to personal decision and three due to death unrelated to study participation. Kattakuzhy noted that the 9% loss to follow-up was consistent with other studies of real-world urban populations.

The primary outcome was sustained virological response, or undetectable HCV RNA at 12 weeks after completion of treatment (SVR12).

The overall SVR12 rate was 94.2% in a per-protocol analysis of 382 patients with available data. Cure rates were statistically similar for patients treated by primary care physicians (97.3%), nurse practitioners (95.2%) and specialists 92.7%.

HIV co-infection status had no impact on SVR12 rates overall (90.9%) or by provider type (90.9, 88.9 and 91.2%, respectively). The only factor significantly associated with treatment failure was having genotype 1a as opposed to 1b.

Overall, adherence to treatment dropped off over time in all provider groups. Among the 456 patients who completed 12 weeks of therapy, however, cumulative adherence was significantly lower among people treated by specialists (63.8%) compared to those treated by nurse practitioners (81.5%) or primary care physicians (63.8%).

"The ASCEND investigation demonstrates that HCV treatment administered independently by primary-care physicians and nurse practitioners is safe and equally effective as care observed with experienced specialists, inclusive of challenging sub-populations of the epidemic, and within the largest black cohort described to date," the researchers concluded. "The ASCEND model could increase the availability of community-based, non-specialist providers to significantly expand the scale of HCV therapy, and bridge existing gaps in the hepatitis C care cascade."

Kattakuzhy added that this may be especially relevant for underserved and rural hepatitis C patients.

"We know we have too few experienced specialists treating HCV and this is severely hampering our ability to eradicate this disease once and for all," vice secretary of the European Association for the Study of the Liver (EASL) Prof. Tom Hemming Karlsen stated in an EASL press release about the study. "This research has the potential to be a genuine game changer in the way we look at HCV treatment across the board, and could provide the opportunity to increase access to care and treatment to many regions of the world."