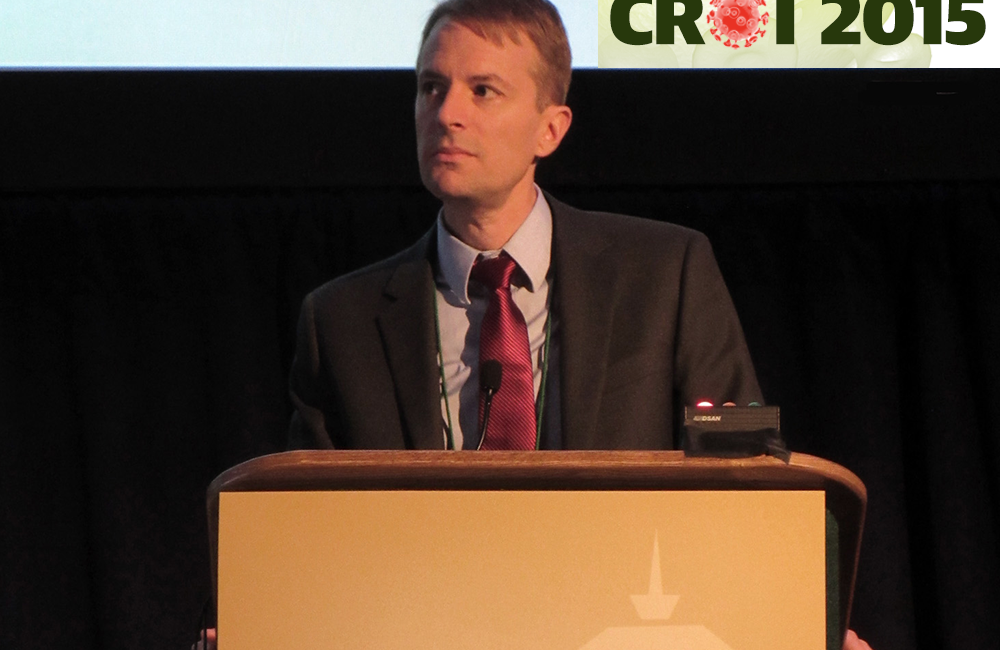 David Wyles presenting at CROI 2015. Photo by Liz Highleyman, hivandhepatitis.com
This article is more than 8 years old. Click here for more recent articles on this topic

Direct-acting antiviral regimens containing sofosbuvir (Sovaldi) and the drugs in Viekirax/Exviera were highly effective regardless of how soon hepatitis C viral load became undetectable after starting treatment, according to research presented at the recent Conference on Retroviruses and Opportunistic Infections (CROI 2015). Furthermore, even having low-level detectable HCV RNA at the end of treatment does not preclude a cure, the investigators for a related study concluded.

The advent of direct-acting antiviral agents (DAAs) that interfere with various steps of the hepatitis C virus lifecycle has revolutionised hepatitis C treatment and allowed interferon-free therapy. The outgoing standard of care, pegylated interferon plus ribavirin, lasted 6-12 months, caused difficult side-effects and only cured about half of people who were treated.

When using interferon-based therapy, hepatitis C viral load or HCV RNA level was monitored over the course of therapy – typically from 4 weeks after starting treatment to 24 weeks after its completion – to allow people without adequate viral suppression to discontinue treatment that was likely to be futile, sparing them months of adverse effects. But the value of viral load monitoring has not been demonstrated for interferon-free therapy, which typically lasts 3-6 months, is well-tolerated and cures hepatitis C for upwards of 90% of people treated.

David Wyles of the University of California at San Diego presented findings from a study of viral kinetics among people treated with AbbVie's Viekirax/Exviera or '3D' regimen consisting of the HCV NS3/4A protease inhibitor paritaprevir, NS5A inhibitor ombitasvir and a ritonavir booster in a once-daily coformulation, taken with the non-nucleoside HCV NS5B polymerase inhibitor dasabuvir.

This pooled analysis included 2053 people with HCV mono-infection, treated with the 3D regimen with or without ribavirin in six phase 3 clinical trials, and 63 people with HIV and HCV co-infection, treated with the 3D regimen plus ribavirin in the phase 2 TURQUOISE-I trial. Participants who did not achieve sustained virological response, or continued undetectable HCV RNA 12 weeks after completion of treatment (SVR12), for reasons other than virological failure were excluded from this analysis.

All participants had HCV genotype 1. About 60% of people with HCV mono-infection and 90% of people with HCV and HIV co-infection were men, 6% and 24%, respectively, were black and the mean age was approximately 51 years. About 80% had unfavourable IL28B gene patterns, one-third were non-responders to prior interferon-based therapy (a mix of relapsers, partial responders and null responders) and 19% had liver cirrhosis.

HCV cure rates were high regardless of time to initial viral suppression. Between 96% and 100% of study participants across all groups who reached the LLOQ at 1, 2 or 4 weeks after starting therapy went on to achieve SVR12, as did 92% of people with mono-infection who reached LLOQ by week 6. A similar pattern was seen when looking at LLOD, except for higher cure rates among people who first attained viral suppression by week 6.

Time to viral suppression did not differ significantly according to race, sex, IL28B pattern, prior treatment status, HCV subtype 1a vs 1b or cirrhosis status, or by CD4 cell count among the participants with HIV co-infection. The only factor associated with shorter time to initial viral suppression was lower baseline HCV viral load. However, baseline HCV RNA level did not affect the likelihood of ultimately achieving SVR12.

"High SVR12 rates were achieved in patients with or without cirrhosis regardless of time to initial suppression of HCV RNA," the researchers concluded. "Traditional negative predictors such as cirrhosis, black race, prior [pegylated interferon/ribavirin] null response and unfavourable IL28B genetic background did not influence time to viral suppression."

In response to a question, Wyles said that whether or not ribavirin was used also did not affect time to viral suppression or SVR12 rates. "Ribavirin doesn’t seem to have much effect on viral kinetics," he said. "It's still a mystery what it does."

Jérémie Guedj of INSERM in Paris and colleagues performed a related analysis looking at HCV viral kinetics among people treated with sofosbuvir-containing interferon-free regimens in the SPARE and SYNERGY trials, while Sreetha Sidharthan of Leidos Biomedical Research and colleagues looked at the utility of HCV viral load monitoring in the SYNERGY and ERADICATE trials.

All three trials, conducted by the US National Institutes of Health, enrolled primarily low-income people in the Washington, DC, area. A majority were men, 85% were African-American and the median age was around 55 years. Most (72%) had harder-to-treat HCV subtype 1a and one-quarter had advanced fibrosis or cirrhosis:

The researchers used a mathematical model to predict HCV viral load decline over time based on which steps of the viral lifecycle the different direct-acting antivirals (DAAs) target. They predicted that during the first phase of decline HCV RNA would decrease more rapidly and steeply when using sofosbuvir with other DAAs versus only with ribavirin. They further predicted that combining DAAs that act at different steps would speed up the second phase of viral decline, allowing for shorter treatment.

They found that viral load decline was initially more rapid and steeper among SYNERGY participants treated with sofosbuvir/ledipasvir compared to SPARE participants who received sofosbuvir with ribavirin alone. The researchers concluded that this was due to ledipasvir – an NS5A replication complex inhibitor – blocking viral assembly and release, while the delayed response in SPARE suggests that sofosbuvir itself has only a minimal effect at this stage of viral replication.

The model predicted that people with any detectable virus at the end of 6 weeks of treatment should experience viral rebound, since at that point there would still be a million new viral particles being produced every day. But this usually did not happen. (This study used a more sensitive assay with an LLOQ of 12 IU/ml and an LLOD of 3 IU/ml.)

"There must be other reasons to explain the high SVR," Guedj said. "We think most of the [newly produced] virus may be uninfectious...treatment may have the effect of replacing a working replication complex with a defective replication complex, which explains how most patients could clear the virus in 6 weeks."

Using the estimated decay rate of functional replication complexes, the researchers predicted that the SVR12 rate would fall to just 42% for sofosbuvir/ledipasvir plus GS-9451 taken for only 4 weeks, and even lower for the other regimens. This is, in fact, quite close to the observed 39% SVR4/8 rate seen in the C-SWIFT study of a triple regimen containing sofosbuvir plus Merck's experimental NS5A inhibitor elbasvir and HCV protease inhibitor grazoprevir.

Based on these findings, the researcher concluded that direct-acting antivirals may have a "hidden effect [of treatment] not reflected in measured HCV RNA," and that "viral load kinetics, in particular at [end of treatment], may not be a reliable marker of SVR."

Sreetha Sidharthan and colleagues evaluated the ability of HCV RNA levels measured at week 4 and at the end of treatment to predict outcome among 37 people with HCV mono-infection who were part of the SYNERGY study and 50 people with HIV and HCV co-infection who were part of the ERADICATE study and who were treated with sofosbuvir/ledipasvir for 12 weeks (this analysis omitted SYNERGY participants who received one of the triple regimens for only 6 weeks). As noted above, SVR12 rates for this regimen were 100% in SYNERGY and 98% in ERADICATE.

Using the more sensitive Abbott assay with a quantification limit of 12 IU/ml, the majority of participants with HCV RNA >LLOQ, or below the LLOQ but still detectable, at week 4 went on to achieve SVR12. There were five people in SYNERGY and seven in ERADICATE who still had detectable HCV RNA at the end of treatment, and all achieved SVR12. The negative predictive value of week 4 viral load was less than 13%. Looking at people with HCV RNA >LLOQ at week 4 and at the end of treatment, a majority achieved SVR12 and the negative predictive value was >11%. Fewer people had HCV RNA >LLOQ or <LLOQ but detectable using the less sensitive Roche assay.

"Low negative predictive values of HCV RNA at week 4 underscore the importance of continued therapy for patients who fail to achieve undetectable levels of HCV RNA early on during treatment because the likelihood of achieving SVR12 is still high," the researchers concluded. "Contrary to past experience with interferon-containing treatments, the presence of detectable HCV RNA at EOT [end of treatment] is not predictive of relapse in these studies."

That is, unlike with interferon-based therapy, patients should not be counselled to discontinue treatment early if viral load remains detectable at week 4, or even at the end of treatment, as there is still a high likelihood of being cured.