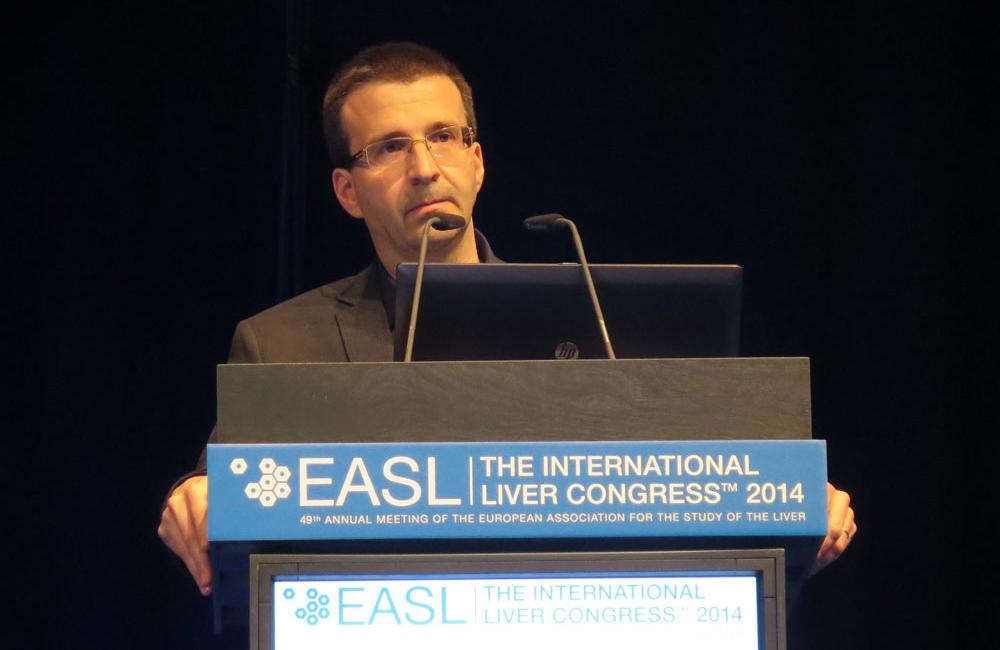 Xavier Forns speaking at the International Liver Congress 2014. Photo by Liz Highleyman, hivandhepatitis.com.
This article is more than 8 years old. Click here for more recent articles on this topic

Sofosbuvir plus ribavirin is a safe option that can lead to sustained response in people with advanced liver disease including those with decompensated cirrhosis and portal hypertension, and people who experience severe hepatitis recurrence after a liver transplant, researchers reported last week at the 49th Annual Meeting of the European Association for the Study of the Liver (EASL) in London.

Over years or decades, chronic hepatitis C virus (HCV) infection can lead to severe liver complications including cirrhosis, hepatocellular carcinoma, end-stage liver disease and the need for a liver transplant. People with advanced liver disease are in most dire need of treatment, but interferon can be difficult to tolerate and potentially dangerous, and is therefore contraindicated for these sickest patients.

Nezam Afdhal from Beth Israel Deaconess Medical Center in Boston presented findings from a study of sofosbuvir plus ribavirin for people with cirrhosis who have portal hypertension. When the liver is heavily scarred, blood flow can back up in the portal vein system, leading to decompensation symptoms such as ascites (abdominal fluid build-up) and bleeding varices (varicose veins) in the stomach or oesophagus.

This analysis included 50 people with chronic hepatitis C and advanced cirrhosis. About three-quarters were men, most were white and the median age was approximately 55 years. About 40% had HCV genotype 1a and 30% 1b, with smaller numbers having genotypes 2, 3 or 4. About 80% had been previously treated for hepatitis C and a similar proportion had unfavourable IL28B non-CC gene variants.

About 60% of participants were classified as Child-Pugh class B and the rest as class A, except for one individual with class C. Child-Pugh scores are calculated based on bilirubin and serum albumin levels, blood clotting capacity, and presence of ascites and hepatic encephalopathy (brain impairment). Class A (5-6 points) indicates compensated cirrhosis and has the best prognosis; class B (7-9 points) and C (10-15 points) indicate decompensated cirrhosis.

Participants had portal hypertension indicated by a hepatic venous pressure gradient (HVPG) of >6mm Hg (mean 16mm Hg at baseline). They had stomach or oesophageal varices, but without bleeding for at least six months. Fifteen participants had ascites and seven had encephalopathy. People with severe anaemia, high bilirubin, low creatinine clearance, low platelets or liver cancer were excluded, as were liver transplant recipients.

Half of the participants were randomly assigned to receive sofosbuvir (400mg once daily) plus ribavirin (1000-1200mg/day) for 48 weeks, while the remainder were observed without treatment (considered acceptable since there is no standard therapy for people with decompensated liver disease). After six months, those in the observation group crossed over to receive the same treatment. Afdhal presented 24-week data at the end of the observation period.

Participants responded rapidly to treatment, with most having undetectable HCV RNA by week 4. However, people with compensated cirrhosis responded faster than those with decompensated disease, with rapid virological response rates of 100% and 75%, respectively. No viral breakthroughs were seen during treatment.

Among those who completed 24 weeks of treatment, response rates were 100% for people classified as class A and 93% for people classified as class B (one non-responder at week 8). Twenty-four weeks is the typical maximum duration of therapy indicated in the sofosbuvir package label, however, it is too soon to declare a cure as relapse can occur after finishing treatment.

Sofosbuvir and ribavirin were generally safe and well-tolerated. Adverse events were common overall, but serious adverse events were infrequent (seven total, distributed equally between the treatment and observation arms). One person taking sofosbuvir/ribavirin stopped treatment due to an adverse event (rash and swelling around the eyes). The most common side-effects reported by more than 10% of participants in the treatment arm were nausea (32%), weakness (24%), itching (24%), rash (16%), dizziness (16%), insomnia (16%) and fatigue (12%).

Platelet counts and albumin levels improved in the sofosbuvir arm, while declining slightly in the untreated observation arm. Alanine aminotransferase (ALT) levels – an indicator of liver inflammation – fell by more than 70 U/L on average among treated patients but remained stable in the observation arm. However, bilirubin levels rose and haemoglobin fell in the treatment arm, both attributable to ribavirin. A majority of treated people classified as class B saw declines in their MELD scores, a measure used to prioritise people awaiting liver transplants.

Looking at clinical decompensation events, six people taking sofosbuvir/ribavirin had ascites at study entry, falling to none after 24 weeks of treatment (vs falling from nine to seven in the observation group). The number with hepatic encephalopathy fell from five to none (vs rising from two to four in the observation group). One person taking sofosbuvir/ribavirin had an episode of bleeding varices, but no one developed new onset liver decompensation.

"In HCV-infected patients with portal hypertension with and without hepatic decompensation, treatment with sofosbuvir + ribavirin for up to 24 weeks resulted in high rates of virologic suppression irrespective of severity of liver disease and decreased necroinflammation with ALT normalisation," the researchers concluded.

Afdhal explained that while this study is still awaiting post-treatment sustained virological response data, it is important to present safety findings now because sofosbuvir is coming into clinical use and these patients currently have no other acceptable treatment options.

However, he said that he has "no intention" to treat advanced liver disease patients with sofosbuvir plus ribavirin today – given ribavirin's toxicity – but would instead use sofosbuvir with ledipasvir or other well-tolerated direct-acting antivirals.

Xavier Forns of IDIBAPS Hospital Clinic in Barcelona presented data from Spain's compassionate use programme for another group of difficult-to-treat patients with no good treatment options: people who develop severe recurrent hepatitis C after a liver transplant.

Hepatitis C virus (HCV) almost always re-infects the new liver after transplantation. Forns explained that while most people show signs of acute hepatitis between 4 and 12 weeks post-transplant, about 5% develop a more severe condition known as fibrosing cholestatic hepatitis. Around 30% have rapid liver disease progression, developing significant fibrosis (stage >F2) in the new liver within a year. These patients are at high risk for liver graft loss and decreased survival.

This analysis included 104 people with chronic hepatitis C who developed severe recurrent hepatitis after a liver transplant and were judged to have life expectancy less than one year. Forty-eight had severe acute hepatitis or early recurrence – including two with fibrosing cholestatic hepatitis – while 56 had compensated or decompensated cirrhosis (stage F4).

Three-quarters were men and the median age was 55 years. Most had HCV genotype 1a (about 30%) or 1b (about half). The mean time elapsed between transplantation and starting treatment was 17 months.

Participants in this study were treated with sofosbuvir (400mg once-daily) plus ribavirin for 24 to 48 weeks. Physicians could add pegylated interferon at their discretion, and nearly one-quarter did so.

Of these patients, seven stopped treatment early due to adverse events, 12 underwent another liver transplant and 13 died. This left 72 people who completed 24 to 48 weeks of therapy.

Looking at the people who did not receive another transplant, the end-of-treatment response rate was 87% and the sustained virological response rate at 12 weeks post-treatment (SVR12) was 62%.

Among participants who received at least one dose of sofosbuvir, 62% had improved clinical outcomes, 21% remained stable and 21% worsened or died. Clotting capacity and MELD scores improved. Both of the patients with fibrosing cholestatic hepatitis achieved SVR12 and had normalisation of bilirubin and the liver enzyme GGT.

Serious adverse events were common, affecting half of this group of very sick patients. Thirteen per cent stopped treatment for this reason and, again, thirteen died (eight during treatment and five during post-treatment follow-up).

"Treatment with sofosbuvir + ribavirin +/- [pegylated interferon] in patients with severe recurrent HCV who have no other treatment options resulted in higher rates of sustained virologic response than prior standard therapies, improved liver function tests in the majority of patients and improved clinical outcomes as defined by a decrease in clinical decompensating events," the researchers concluded.

Forns noted that outcomes were better among people with acute recurrent hepatitis than among those with chronic recurrent cirrhosis, suggesting that acute fibrosis may be reversible if treated early, while those who develop cirrhosis in the new liver may already have too much damage.

While the 62% SVR12 rate in this compassionate use programme is lower than cure rates in the 90 to 100% range now routinely seen in clinical trials of interferon-free direct-acting antiviral regimens, Forns noted that this treatment was potentially life-saving for some patients at high risk of death.

Afdhal N et al. Sofosbuvir and ribavirin for the treatment chronic HCV with cirrhosis and portal hypertension with and without decompensation: early virologic response and safety. 49th Annual Meeting of the European Association for the Study of the Liver (EASL), abstract O68, London, 2014.