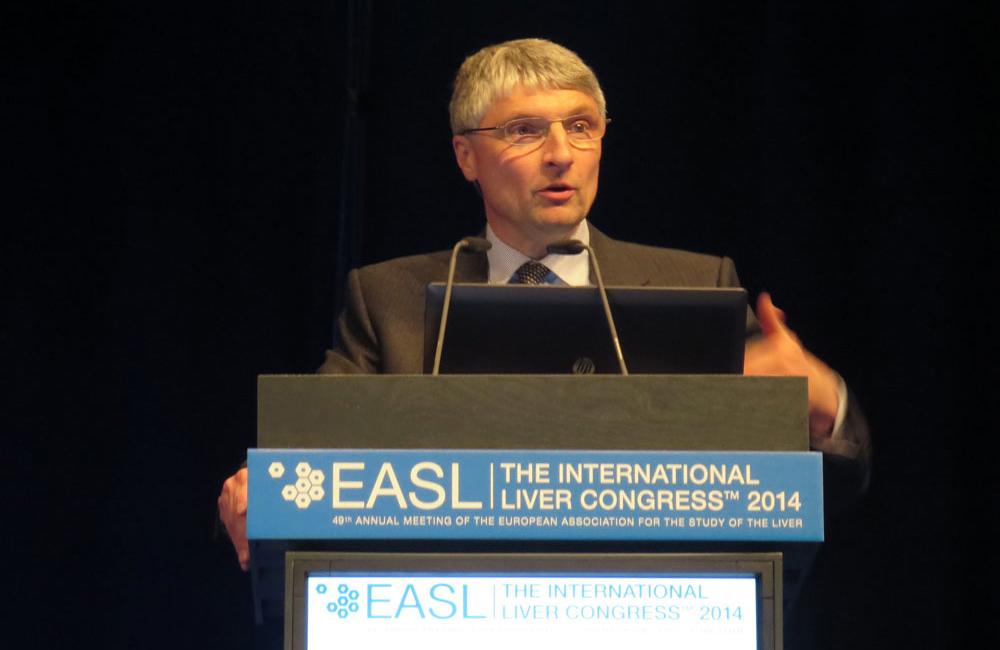 Graham Foster speaking at the International Liver Congress 2014. Photo by Liz Highleyman, hivandhepatitis.com.
This article is more than 8 years old. Click here for more recent articles on this topic

Hepatitis C treatment using sofosbuvir (Sovaldi) is highly effective even for people with multiple factors traditionally associated with poor response. Having four or more negative predictive factors, however, raises the risk of post-treatment relapse, according to a report at the 49th annual meeting of the European Association for the Study of the Liver (EASL) held recently in London.

The advent of direct-acting antiviral agents (DAAs) has begun to revolutionise treatment for chronic hepatitis C. But several aspects of treatment – including the optimal duration of therapy and the best regimens for patients traditionally considered difficult to treat – are not yet fully understood.

Graham Foster of Queen Mary University of London and colleagues looked at the influence of various host and virus factors traditionally associated with poor response to interferon-based therapy.

Interferon, formerly the mainstay of treatment for chronic hepatitis C, works by stimulating the body's own immune response against the virus. Direct-acting antivirals directly interfere with different steps of the hepatitis C virus (HCV) lifecycle. Studies have shown that some of the factors associated with poor response to interferon may not have as much effect when using DAAs.

Sofosbuvir leads to high response rates for most patient populations. However, a small proportion of people do not achieve sustained virological response, or undetectable HCV RNA at 12 weeks post-treatment (SVR12), which is considered a cure. In most cases this is due to relapse, or viral rebound after treatment is finished.

Foster and his team performed a retrospective meta-analysis of data from phase 2 and 3 clinical trials of sofosbuvir, used with either pegylated interferon and ribavirin (ATOMIC, NEUTRINO) or ribavirin alone (FISSION, POSITRON, FUSION, VALENCE).

The researchers first performed a univariate analysis to see the effect of each factor by itself, then did a multivariate analysis to look at how these factors interact. Finally, they calculated cure rates for people with increasing numbers of negative predictive factors.

Surprisingly, while having HCV genotype 3 rather than 2 was a significant risk factor (OR 2.5), the differences between genotype 1 vs 2 and between 3 vs 1 did not reach statistical significance (p = 0.18 and 0.06, respectively). Nor did HCV subtype 1a vs 1b turn out to be significant in a more restricted analysis of  people with genotype 1 (p = 0.14).

Cure rates were 90% or higher for all genotype groups with zero to three negative predictive factors. For those with four or more factors, the effect was most pronounced among people with HCV genotypes 1 or 3 (in fact, no genotype 1 patients had zero risk factors).

"Sofosbuvir-based regimens were highly effective, even in patients with a combination of multiple negative factors," the researchers concluded. "SVR12 rates were comparatively lower in patients with five or six of the negative predictors."

"Patients need to have a cluster of poor predictors to be at risk for failure," Graham Foster explained. He suggested that these factors "may help guide us in an interferon-free world" when deciding on what regimens to use and for how long.

Notably, this analysis is specific to sofosbuvir, an HCV polymerase inhibitor. Other trials indicate that the negative predictive factors which remain relevant may differ among the various DAAs.

Foster G et al. Sofosbuvir-based regimens are associated with high SVR rates across genotypes and among patients with multiple negative predictive factors. 49th Annual Meeting of the European Association for the Study of the Liver, abstract O66, London, 2014.