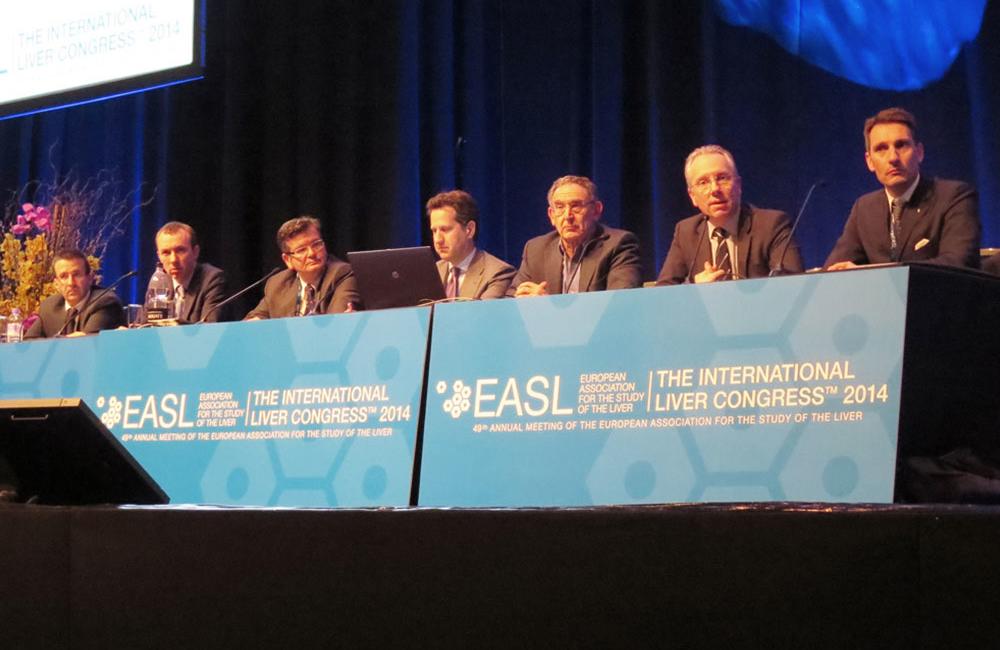 Guidelines panel at the International Liver Congress 2014. Photo by Liz Highleyman, hivandhepatitis.com.
This article is more than 8 years old. Click here for more recent articles on this topic

The European Association for the Study of the Liver (EASL) has issued new guidelines for the treatment of hepatitis C which recommend that wherever possible, patients should be treated with the newest direct-acting antivirals.

EASL is also encouraging European physicians to combine products from different pharmaceutical companies to achieve the most potent interferon-free regimens, often in advance of full phase III trial data, in its new hepatitis C treatment guidelines issued on Friday at the International Liver Congress in London.

The guidelines move beyond US recommendations issued in January, which incorporated a small number of off-label uses not included in the US licences for sofosbuvir and simeprevir. The new guidelines also include daclatasvir, an NS5A inhibitor that is likely to receive approval in Europe later this year.

Guidelines panel chair Professor Jean-Michel Pawlotsky, director of the French National Reference Centre for Viral Hepatitis B, C and Delta told reporters that the EASL guidelines were designed to accommodate the diversity of European populations and reimbursement practices. The guidelines were also designed to empower physicians to obtain permission to use new agents under compassionate access arrangements, prior to licensing, said Dr Alessio Aghemo, a member of EASL’s Scientific Committee and a professor of medicine at the University of Milan.

The EASL guidelines are another sign that when making prescribing decisions for people with hepatitis C, physicians do not intend to be constrained by licensing indications or the quest of pharmaceutical companies to deliver 'exclusive' drug combinations that require prescribers to use co-formulated direct-acting antivirals from one company.

The guidelines make recommendations for all genotypes, and include all direct-acting antivirals that are expected to be licensed in Europe during 2014, including the protease inhibitor simeprevir (Olysio) and the NS5A inhibitor daclatasvir. Simeprevir is likely to receive marketing approval in May 2014 and daclatasvir in September 2014. Bristol-Myers Squibb, the developer of daclatasvir, has anticipated the European move towards a 'mix-and-match' approach by applying for a licence for daclatasvir alone in Europe. In the United States, it is seeking a licence for daclatasvir in combination with asunaprevir.

The guidelines will be updated as soon as approval dates for new interferon-free combinations of sofosbuvir/ledipasvir (Gilead Sciences) and ABT-450/ritonavir, ombitasvir and dasabuvir (AbbVie) are known. These are likely to be approved in early 2015.

The full guidelines can be downloaded from the EASL website here.