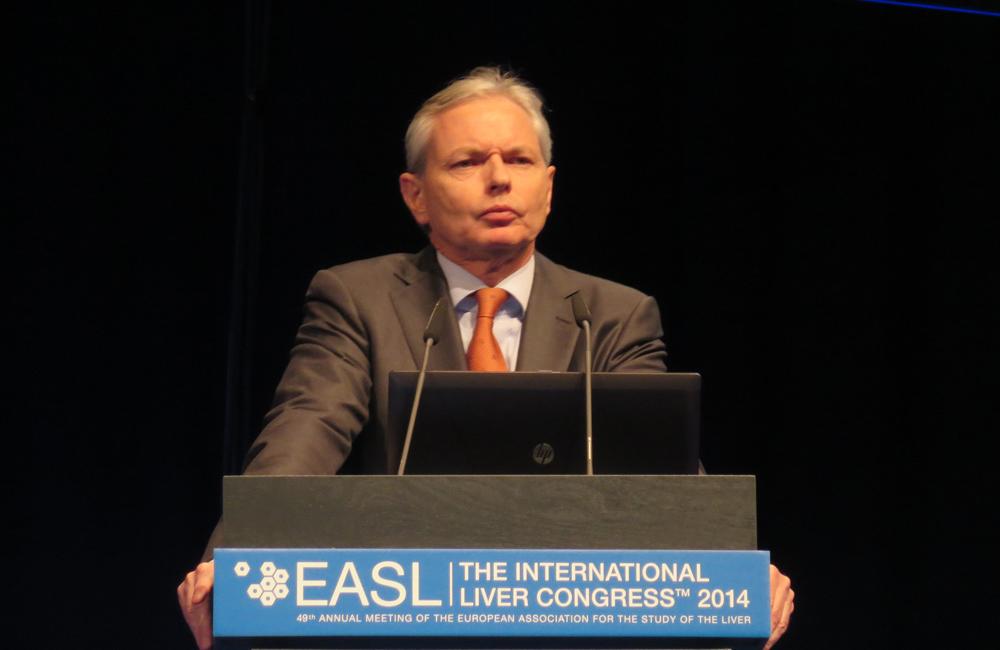 Professor Stefan Zeuzem speaking at the International Liver Congress 2014. Photo by Liz Highleyman, hivandhepatitis.com.
This article is more than 8 years old. Click here for more recent articles on this topic

A 12-week course of three direct-acting antivirals developed by AbbVie, plus ribavirin, cured 96.3% of treatment-experienced patients with hepatitis C genotype 1 infection, Professor Stefan Zeuzem of the JW Goethe University Hospital, Frankfurt, Germany told the 49th Annual Meeting of the European Association for the Study of the Liver in London on Thursday.

The AbbVie combination consists of three drugs which each target a different stage in the viral lifecycle of hepatitis C virus (HCV), used without interferon. New interferon-free combinations are being developed by several pharmaceutical companies, and represent a major advance on the previous standard of care. Interferon-free treatment appears better tolerated, and can cure a much higher proportion of patients in a shorter time.

The data presented by Prof. Zeuzem come from the SAPPHIRE II study, a phase III study which recruited 394 people with genotype 1 hepatitis C (58% genotype 1a, 41% genotype 1b) who did not respond to a previous course of dual HCV therapy with pegylated interferon/ribavirin. Patients were eligible for inclusion if they had relapsed, had a partial response or had a null response. In the study, 49% of participants were previous null responders. The study was designed to evaluate a 12-week course of interferon-free treatment in a patient population that has been hard to treat with interferon-based therapy.

The median age of study participants was 55 years. The study population had less advanced liver disease. None of the participants had cirrhosis, and 68% had F0 or F1 fibrosis.

Participants were randomised on a 3:1 basis to receive the oral interferon-free combination or placebo.

Therapy lasted for twelve weeks and the primary outcome was sustained virological response rate twelve weeks after the completion of treatment (SVR12).

Overall, 96.3% of patients receiving the investigational therapy had SVR at week twelve (95% confidence interval 94.2-98.4%). SVR12 rates were similar according to previous treatment outcome (95.3% for individuals who relapsed, 100% for patients with a partial response and 95.2% for those who had a prior null response).

SVR12 rates among patients receiving the study medication were comparable for genotype1a and genotype 1b (96 vs 96.7%). All cases of virologic failure in the study occurred after the completion of treatment: seven patients experienced a viral breakthrough between two and eight weeks after completing treatment. Six of these viral breakthroughs occurred in patients who had been null responders to previous treatment.

There was no significant difference in the development of laboratory abnormalities. Less than 5% of patients developed anaemia as a consequence of ribavirin treatment, and no patient developed anaemia that was severe enough to require erythropoietin treatment in order to restore haemoglobin to normal levels.

Questioned regarding the extent to which patients were excluded from the study due to potentially hazardous drug-drug interactions caused by ritonavir (an inhibitor of CYP3A4, a liver enzyme involved in the metabolism of numerous medicines), Prof. Zeuzem said that the incidence was likely to have been “a very low one-digit percentage”. He argued that the main issue regarding ritonavir-related drug interactions was the need for medical education to ensure that physicians, especially hepatologists unfamiliar with ritonavir, understood the potential interactions.

He pointed out that some of the drugs that interact with ritonavir, such as statins, could be safely interrupted for 12 weeks, or patients could be switched to other drugs that do not have problematic interactions with ritonavir.