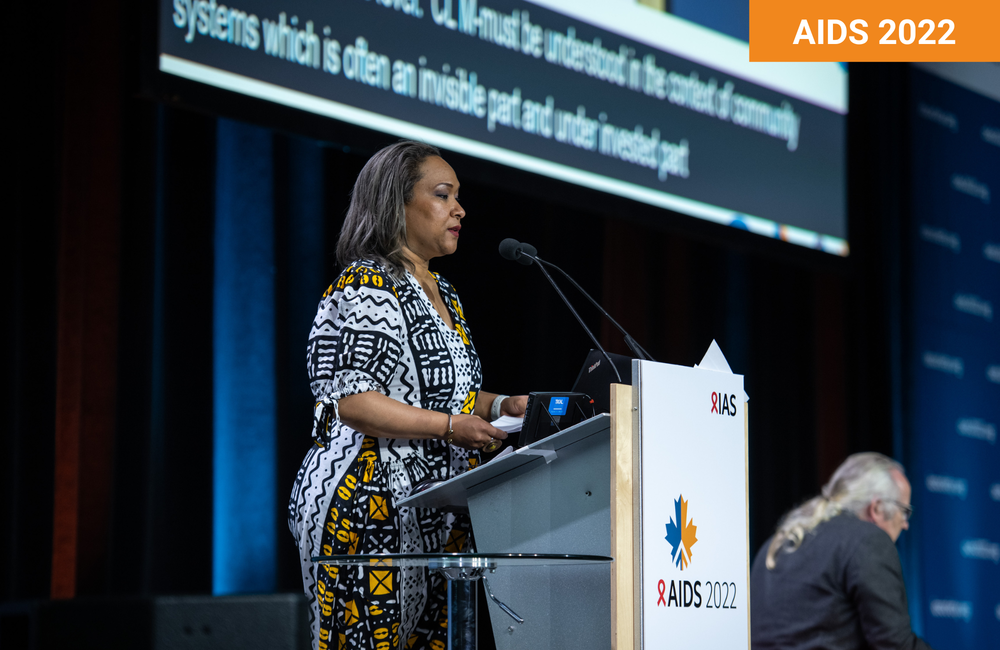 The model sits alongside other community-led interventions, such as campaigns and advocacy, and leads to a more rounded data picture of the issue monitored. For example, in late 2020, ITPC and the Network of HIV Positives in Sierra Leone (NETHIPS) implemented a community-led project observing five healthcare facilities in the west African country. By attempting to monitor how many people living with HIV experienced treatment failure during COVID-19, they found that this data was not being collected. Exposing this data gap has led to a commitment from the National AIDS Control Program in Sierra Leone to include it as a new national indicator.

Baptiste outlined key barriers to its success, such as misconceptions about what it is. For example, community-led monitoring is not data collection on its own, a quality improvement initiative or monitoring carried out by providers with the support of communities. Communities of people living with HIV face inequitable access to funding for community-led monitoring, in comparison to other research methods.

Baptiste outlined the ITPC model for community-led monitoring and the methodology behind it. The ITPC Community-led Monitoring Hub also launched at AIDS 2022.

The conference saw examples of community-led monitoring which has produced actionable data insights and advocacy wins.

Baptiste highlighted the work of Ritshidze. She mentioned that the most recent Global Fund application from South Africa explicitly used community-led data and methodology, which helped secure a five-fold increase in funding.

Ritshidze is one of the largest community-led observatories which collects qualitative and quantitative data through observations and interviews to document the challenges of people accessing public healthcare (HIV and TB services). A poster at the conference focused on key populations, including men who have sex with men, people who use drugs, sex workers, trans people and young people.

Between August and October 2021, they collected 5979 surveys from people using health services across 18 districts and 7 provinces in South Africa. They found that 20% of key populations were unable to access treatment because of poor experiences and hostile staff. This was coupled with lack of safety and privacy as well as being denied services. Over 75% of people accessed services through public health facilitates. There was limited availability and accessibility of services which are specific to the needs of key populations.

Of these surveys, 2397 were with people who use drugs. “The staff here in this clinic do not treat us people who use drugs as human beings. They are so judgemental towards us. They are calling us names that make us feel offended” is one example of people’s experience of services. Twelve per cent of people who use drugs were refused access to services because of this. They were also the least likely to report friendly and professional care, with the lowest responses out of all the key populations who reported their experiences.

In response to the findings, key indicators of healthcare quality have begun to improve. For example, there has been an 11% increase in people collecting their medication every three months, rather than every month.

Monitoring of services in Nepal found specific opportunities for improvement and differentiation of services to respond more accurately to community needs. In 2020, the Meeting Targets and Maintaining Epidemic Control Project (EpiC) team introduced community scorecards and an electronic client feedback process to implement community-led monitoring in Nepal. The scorecards were generated from a questionnaire and qualitative interviews with people accessing services from across 26 sites. Overall, satisfaction with services averaged at 83%. However, this varied for specific elements of the services offered. For example, the lowest average score was 74% for testing services and highest was 87% for reducing stigma and discrimination.

A system called LINK set up to gather anonymous feedback from communities was promoted through service sites and notifications sent via platforms such as WhatsApp. Between October 2020 and September 2021, feedback was provided 3512 times and 90% of responses showed satisfaction with the services. However, 212 complaints were reported.

The communities provided specific insight on the accessibility of services due to opening times, expanding the availability of sexually transmitted infection services, improving the quality of counselling, ensuring client confidentiality and clinic cleanliness. Results gathered from both methods prompted consultations with stakeholders to develop action plans. Almost all the sites implemented changes in response to the data. Ongoing community-led monitoring will evaluate the improvement efforts.

Community-led monitoring in Uganda has brought together community organisations in order to improve accountability and accessibility of HIV and TB service delivery. Lessons learned presented by Beatrice Ajonye show the journey of communities who have scaled up monitoring.

From October 2020, organisations led by the International Coalition of Women Living with HIV in Eastern Africa, observeed 432 health facilities. Monitors visited the sites to collect both qualitative and quantitative data, using standardised data collection tools. The findings were evaluated in December 2021, with a view to understand whether the community-led monitoring programme was running effectively and if it achieved outcomes beyond those it intended to.

It found three core lessons. In order to optimise governance of the programme, efficient communication and coordination backed by inclusive leadership and decision-making is key. For example, programme implementers, donors and technical partners need to be aligned in expectations in order to avoid changes and delays to the programme. Another finding was that emphasis needed to be on the quality of data rather than quantity. The programme needs to build staff’s analytical capabilities to rapidly provide evidence-based insights. Finally, to achieve long-term impact, a system which can identify problems, develop solutions, and monitor progress whilst working with those being held to account is necessary.

In order to make sustained improvements to the service delivery, the communities will need to use the data to advocate and hold to account those running services.

Grounding the community-led monitoring models as a scientific method which is invested in, validated, valued, and acted on in the same way as biomedical approaches to science has been a key challenge. Like new medicines and technologies, accountability interventions are innovations in health which are “necessary, valuable and reliable,” Baptiste said.

Recent global research shared at the conference echoes this. However, there is a lack of research focusing on the impact of community-led monitoring. Funding for community interventions is often unmeasured, making it even harder to quantify impact.

Using traditional methods of extracting data from communities leads to gaps in understanding the experiences behind the data. Baptiste shared how the community-led monitoring model democratises data, enabling communities to “take pen to paper to track their lived experiences”. It provides an evidence base for advocacy that can and should be used to co-create solutions to the challenges they face. This is particularly important for people in key populations who face barriers not addressed by incomplete data gathered by those who fund, design, and deliver services.