Raltegravir appears safe for mothers and babies during pregnancy 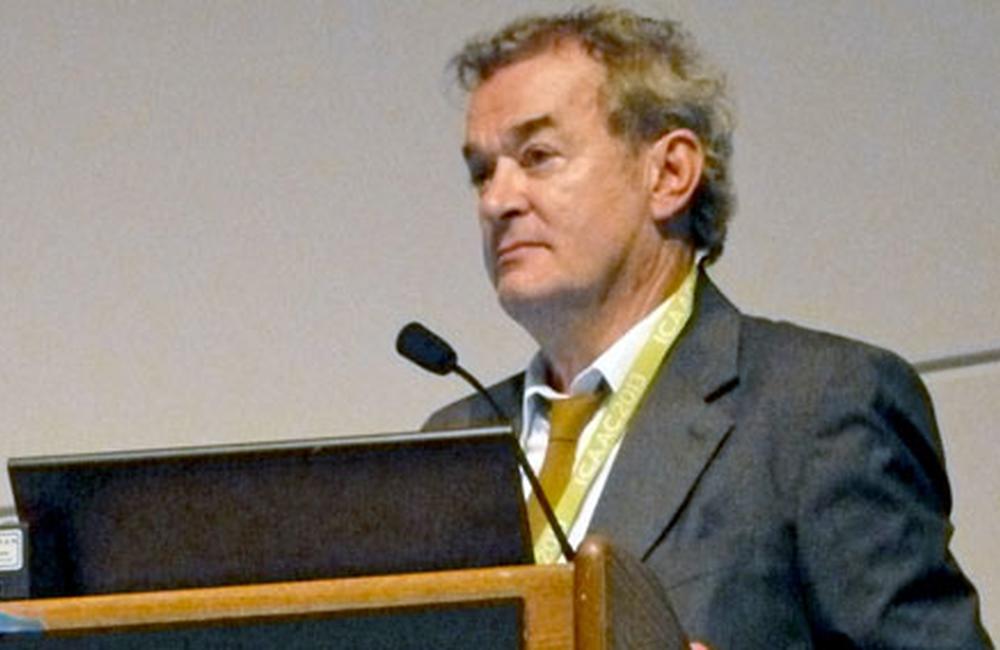 Vincen Jeantils speaking at ICAAC 2013.
This article is more than 9 years old. Click here for more recent articles on this topic

Antiretroviral regimens containing the integrase inhibitor raltegravir (Isentress) were shown to be safe and effective for pregnant women living with HIV and did not cause birth defects in their infants, researchers reported last week at the 53rd Interscience Conference on Antimicrobial Agents and Chemotherapy in Denver.

Effective antiretroviral therapy (ART) during pregnancy can suppress viral load, improve the health of pregnant women living with HIV and dramatically reduce the likelihood of mother-to-child transmission. Current treatment guidelines recommend that all pregnant women should start combination ART during the second trimester, regardless of CD4 cell count.

But drugs taken during gestation – especially during the first trimester when foetal organs are forming – present a potential risk of adverse events, including pregnancy complications, premature birth and congenital abnormalities in infants.

Vincent Jeantils from Jean Verdier Hospital in Bondy, France, presented findings from a study of outcomes amongst pregnant women treated with raltegravir. While the pregnancy safety of older drugs such as AZT (zidovudine, Retrovir) and nevirapine (Viramune) is well established, newer antiretrovirals like raltegravir may offer better-tolerated alternatives.

Determining safety of new drugs during pregnancy is particularly urgent for women who need these drugs due to extensive resistance, those who are already taking them when they become pregnant and those who are found to be HIV positive late in pregnancy and must bring down their viral load rapidly before delivery, Jeantils explained.

This analysis, begun in 2008, included 31 pregnant women at a single centre near Paris. Most (80%) were black, including many African immigrants, and the median age was 31 years (range 18 to 44 years). Three women were co-infected with hepatitis B and two with hepatitis C.

The median duration of ART use before pregnancy was about six months, but half were antiretroviral treatment-naive. At the time of raltegravir initiation, the median CD4 count was 442 cells/mm3 and the median HIV viral load was approximately 17,700 copies/ml.

Five of the women (16%) started raltegravir before pregnancy and stayed on the drug. The rest began taking raltegravir during pregnancy, three during the second trimester and 23 during the third trimester. The median duration of raltegravir use was 71 days. In addition to raltegravir, about 60% also took protease inhibitors and nearly 40% used tenofovir/emtricitabine (Truvada).

Five women switched to raltegravir due to side-effects of their current ART regimen (all related to protease inhibitors) and 19 did so due to poor adherence. In addition, two women tested HIV positive during late pregnancy (at 28 and 34 weeks) and needed to suppress viral load quickly.

Raltegravir was generally safe and well tolerated with no notable adverse events. Antiviral efficacy in the pregnant women was similar to that seen in the general population.

All but one of the women received intravenous AZT during labour and delivery – an element of an older standard of care that most experts no longer consider necessary if an HIV-positive woman is on effective combination ART with undetectable viral load.

By the time of delivery, most women (81%) had undetectable HIV RNA according to the most recent test. Overall median viral load had fallen to a median of 41 copies/ml, with levels ranging from 45 to 641 copies/ml among those with detectable virus.

The median duration of gestation was 38 weeks. Approximately two-thirds of participants underwent caesarean sections for various reasons – half elective and half emergency – including two planned procedures due to viral load still being detectable.

There were 32 live births, including one set of twins. Median infant weight was 3100g, median height was 48cm, and median Apgar score was 9.6 out of 10 – all within normal ranges.

No birth defects or biological abnormalities were observed in any of the babies in this study. Jeantils noted that to date the Antiretroviral Pregnancy Registry has received three reports of congenital defects among 119 infants exposed to raltegravir during the first trimester, and six defects among 109 exposures during the second or third trimesters.

After delivery, the infants were started on a course of prophylactic antiretrovirals (mostly AZT alone, with four receiving dual and five receiving triple therapy). No adverse events were observed and 93% had undetectable HIV DNA at six months.

A subset of participants underwent pharmacokinetic testing to determine raltegravir levels in maternal plasma, amniotic fluid and umbilical cord blood. Median drug levels were 169, 127 and 198ng/ml, respectively, with a cord-to-maternal blood ratio of 3.48.

In this study, "a regimen containing raltegravir in pregnancy seems safe for the mothers and the neonates," the researchers concluded. They added that the safety of a raltegravir-containing regimen, together with its rapid antiretroviral activity, absence of embryonic or foetal toxicity in animal studies and high placental transfer "offers a promising new strategy".

Raltegravir penetrates well into cerebral-spinal fluid, semen and cervical-vaginal fluid, the researchers noted. Therapeutic concentrations in infants are maintained for several days after delivery. As raltegravir rapidly lowers viral load and its good placental transfer allows for 'preloading' the baby, they suggested it may be an effective new option to nevirapine if HIV is diagnosed late in pregnancy.

Jeantils explained that the children born in this study will be followed for six years, if possible, to look at long-term outcomes. The longest duration of follow-up has been five years and no adverse outcomes related to prenatal raltegravir exposure have been seen so far.

A baby boy whose mother has HIV was given specialist drugs within hours of birth following a High Court case.
BBC
1 Feb 23
Child developmental issues

In Tanzania, pregnant women with HIV who had access to antiretroviral therapy for life had less than a 2% risk for vertical transmission, according to data published in The Lancet HIV.
Healio
13 Dec 22
More editors' picks