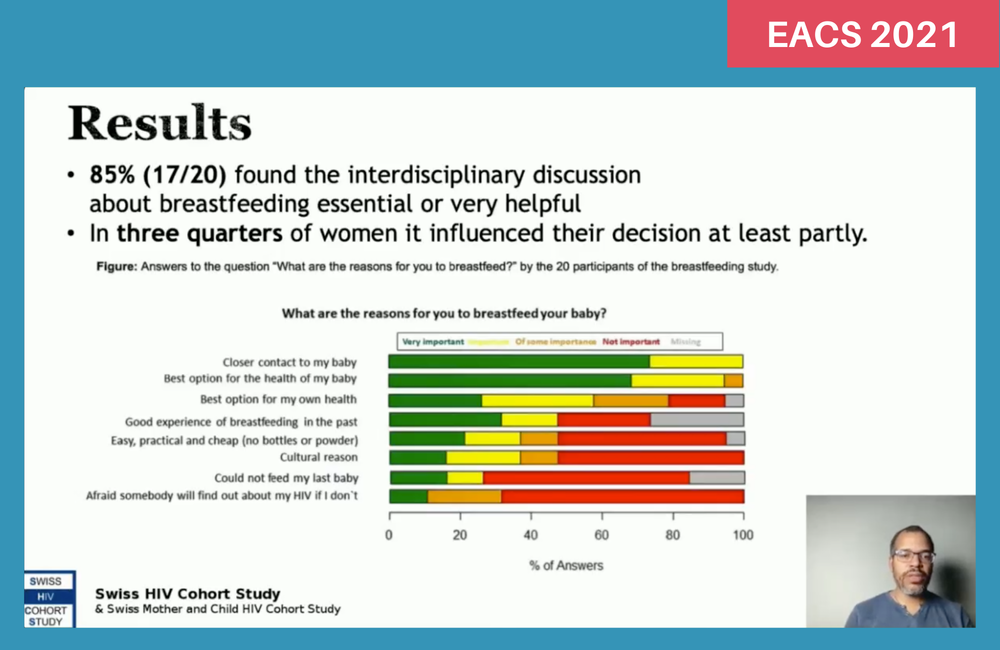 For new mothers with HIV, whether to breastfeed their baby has been a difficult choice. Unlike transmission through sex, viral suppression through antiretroviral therapy (ART) may not completely remove the risk of transmission.

One of the largest studies, from sub-Saharan Africa, found 0.6% of babies born to 1220 mothers who were taking ART became HIV positive themselves within 12 months. But that study did not monitor maternal viral loads. Data from a Tanzanian cohort presented at the 2017 EACS conference found no transmissions from a mother with an undetectable viral load, but not enough is known about viral dynamics in breast milk to be sure whether or not there might be intermittent levels of transmissible HIV.

Complicating the issue is the fact that different advice is given to women in high-income and lower-income countries. In the latter, because of the danger of water contamination and the cost of formula feed, the risk/benefit balance is on the side of breastfeeding and HIV-positive mothers are recommended to breastfeed. In high-income countries, because of the lack of complete certainty on safety, most countries have advice similar to that in the British HIV Association’s pregnancy guidelines, which state that BHIVA “continues to recommend formula feeding by women living with HIV to eliminate the risk of postnatal transmission.”

BHIVA do not, however, completely rule out breastfeeding. The guidelines also add that if mothers wish to breastfeed they should be supported in doing so, as long as they fulfil criteria that include “being prepared to attend for monthly clinic review and blood HIV viral load tests for themselves and their infant” during breastfeeding and for two months after stopping it.

Find out more: Feeding your baby when you have HIV

Swiss HIV guidelines were revised in 2019 to offer mothers a discussion of the risks and benefits of breastfeeding, allowing them to make a choice between formula feeding and breastfeeding.

If HIV-positive women are formula feeding they are not expected to take an HIV viral load test more often than they would normally. Their babies receive a PCR test for HIV at one and five months of age and a full antibody screen at two years.

If mothers wish to breastfeed, they attend an antenatal multidisciplinary meeting with a midwife, an obstetrician, and adult and paediatric HIV doctors where the possibility of transmission and how to avoid it is explained, and they receive intensified viral load monitoring. An HIV PCR test on umbilical cord blood is done at delivery; mothers have viral load tests one, three and five months after delivery and every three months thereafter while breastfeeding, plus a test three months after stopping it.

After the guidelines were changed in 2019, a prospective observational study was conducted including every expectant woman in the Swiss Mother and Child HIV Cohort (MoCHIV) which enrols the majority of HIV-positive mothers in the country. At the 18th European AIDS Conference (EACS 2021), Dr Pierre-Alex Crisinel of Lausanne University Hospital reported on this cohort.

In a small country with low prevalence, there were only 41 women in the cohort. Of these, 20 or nearly half decided to breastfeed despite the additional monitoring requirements.

All 41 women had an undetectable HIV viral load before delivery, and their mean CD4 count was 649.

The women’s average age was 34, with no significant difference between women who decided to breastfeed and ones who did not. Of 36 women with known ethnicity, 22 were Black African, ten White European, one White Latina and three Asian. More White European women decided to breastfeed than not to (seven versus three) and among the Black African women 12 breastfed and ten did not. These differences were not statistically significant.

For 56% of women, this was their first baby.

Three-quarters of those who breastfed were still doing so three months after having their baby and 45% six months after.

The women who breastfed were asked about the reasons for their choice. Eighty-five per cent said the antenatal multidisciplinary meeting had been helpful and 75% said it had influenced their decision.

The women were asked to select their reasons for choosing breastfeeding from a prompt list and say which factors had been most important.

Dr Crisinel said that the feeling of being involved in shared decision-making with their healthcare staff had also been very important to them.

When law and science part ways: the criminalization of breastfeeding by women living with HIV

Antiretroviral therapy alone does not cause disruption in breast milk from mothers with HIV in terms of microbiome richness, diversity or bacterial composition, whereas the use of antibiotics produces distinct changes in the microbiome.
Infectious Disease Special Edition
28 Jun 22
Infant feeding

Policy shifts in infant feeding guidelines for women living with HIV have weakened confidence in breastfeeding in South Africa, according to an analysis of interviews with experts in the field.
SciDev.net
4 Apr 22
Infant feeding

Not offering preventive treatment to women not living with HIV but who are at risk of HIV acquisition undermines the efficacy of all of the South African efforts to eliminate mother to child transmission of HIV. It is urgent and overdue to implement PrEP in pregnancy and during breastfeeding. Failure to do so in the face of proven prevention interventions allows ongoing avoidable HIV infection among women in South Africa with the added high risk of transmission to their infants.
Medical Xpress
29 Nov 21
HIV & criminal law

How local advocates worked with our global network to support a Malawian woman living with HIV prosecuted for breastfeeding – and what happened after she was released from prison.
HIV Justice Network
26 Sep 21
More editors' picks