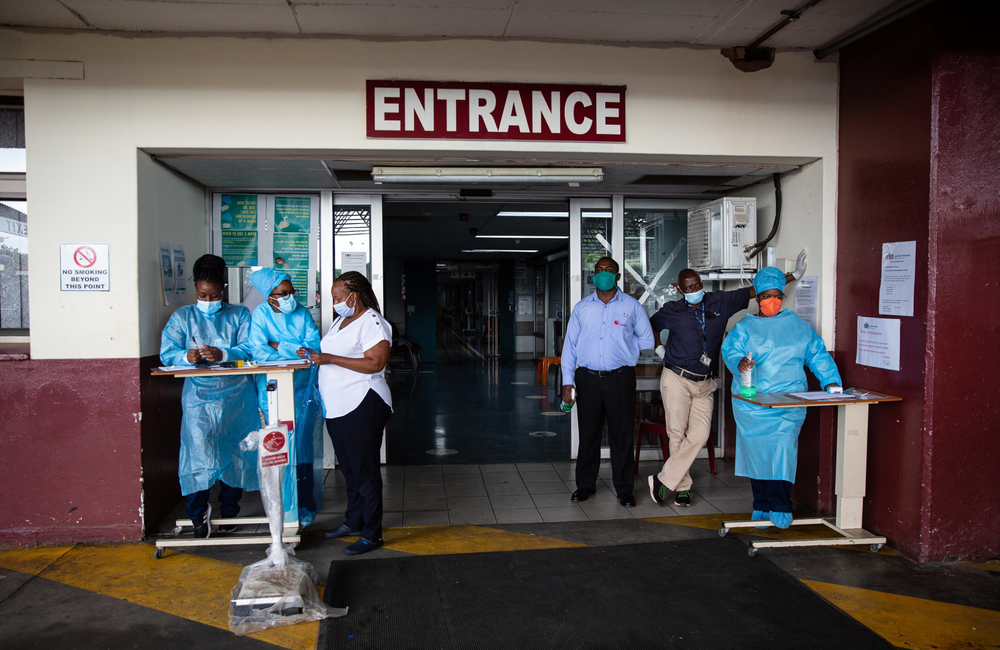 People with HIV who developed COVID-19 during the second wave of South Africa’s pandemic in 2021 were more likely to experience a severe illness than HIV-negative people and more likely than people with HIV in the first wave to show low CD4 counts and other immune disturbances, South African researchers report in the journal eLife.

The researchers say their results suggest that the Beta variant of SARS-CoV-2 that predominated in South Africa’s second wave of COVID-19 leads to more severe disease in people with HIV because this variant interacts with HIV to deplete CD4 cells essential for viral control and promote a more severe inflammatory response.

HIV causes immune dysregulation by depleting CD4 T-cells and disrupting B cell functions critical for antibody responses. These elements of the immune system also play an important role in responses to SARS-CoV-2.

However, what’s unclear is whether a low CD4 cell count increases the risk of severe COVID-19, as some studies suggest, whether the immune system’s response to different SARS-CoV-2 variants is affected by HIV, and if the infecting variant has an impact on HIV-related immune parameters such as CD4 count, potentially increasing HIV-related risk of a severe outcome.

To investigate these questions, researchers at the Africa Health Research Insititute and the University of KwaZulu-Natal looked at COVID-19 outcomes in a cohort of 236 people diagnosed with SARS-CoV-2 infection at three hospitals in Durban.

Participants were enrolled between June 2020 and May 2021, a median of 11 days after the onset of symptoms. Study participants were tested for SARS-CoV-2 by nasopharyngeal and oropharyngeal swab weekly for the first month and then at three-month intervals to assess viral clearance or reinfection after initial diagnosis. Blood samples for assessment of HIV-related parameters were taken at each study visit.

All were admitted to hospital, although 14% were asymptomatic (they presented at hospital for testing as a close contact had COVID-19). Six percent of study participants died and 26% required supplemental oxygen.

Underlying comorbidities (hypertension or diabetes) were significantly less common in people with HIV, but nine percent of people with HIV had active tuberculosis when hospitalised.

Although people with HIV were more likely to need supplemental oxygen due to COVID-19 (34% vs 21%, p=0.024), the death rate was almost identical in people with HIV and HIV-negative people.

"More intensive immunological investigation is needed to understand the interaction between HIV and SARS-CoV-2."

Although people with HIV were no more likely to need supplemental oxygen than HIV-negative people during the first wave of the pandemic (which peaked in July 2020), they were four times more likely than HIV-negative people to need it during the second wave (which peaked in January 2021). The proportion of people with HIV who required supplemental oxygen doubled in the second wave, from 24% to 57% (p=0.0025).

However, when the researchers analysed disease severity in the second wave by CD4 count, they found that people who died or needed supplemental oxygen had significantly lower CD4 counts (a median count of 92 vs 432 in people who experienced mild illness). CD4 counts in people with HIV recovered after clearing SARS-CoV-2 whereas there was little difference in CD4 counts before and after viral clearance in HIV-negative people. The increase in CD4 count was not explained by improved access to antiretroviral treatment, as the proportion of people who had unsuppressed HIV remained the same before and after viral clearance.

A similar pattern was evident in the neutrophil-lymphocyte ratio. An elevated neutrophil-lymphocyte ratio was associated with more severe disease in people with HIV, the elevation in ratio was greater in people with HIV during the second COVID-19 wave, and the ratio declined after viral clearance. These patterns were not observed in HIV-negative people.

The researchers also looked at immune cell profiles in first-wave patients and found some evidence that CD4 and CD8 cell populations displayed different characteristics in people with HIV compared to HIV-negative people, including greater T-cell activation in people with HIV. A second South African group reported earlier this year that people with HIV often failed to mount a CD4 cell response to SARS-C0V-2, especially those with active tuberculosis.

The researchers say that the lack of relationship between disease severity and HIV viremia, along with the association of high neutrophil-lymphocyte ratios and low CD4 counts with disease severity in people with HIV, suggests a synergy between SARS-CoV-2 and HIV in suppressing CD4 cell numbers. How these changes occur, and their consequences for long-term immunity against SARS-CoV-2 infection, and vaccine response, require further investigation, the researchers conclude.

A second research group in southern Africa, at the Lighthouse clinic in Lilongwe, Malawi, has also reported low CD4 counts in people with HIV hospitalised with COVID-19. Dr Tom Heller and colleagues, in a letter to the Journal of Acquired Immune Deficiency Syndromes, describe their observations in 46 people with HIV admitted to hospital with COVID-19 in August 2021.

Sixty-three percent had been on antiretroviral treatment for at least six months, 37% were diagnosed with HIV on admission or within the previous six months. Seventy-five percent of newly diagnosed patients and 67% of those already on ART had CD4 counts below 200 when hospitalised, despite 90% having suppressed viral loads.

In comparison, a control group of 27 consecutive HIV-negative people admitted to hospital with COVID-19 showed significantly higher CD4 counts (a median of 318 vs 184 in people with HIV on ART, p=0.00034). The clinicians conclude that more intensive immunological investigation is needed to understand the interaction between HIV and SARS-CoV-2.

They also warn that people with HIV admitted to hospital with COVID-19 require comprehensive HIV care, as low CD4 counts pose a risk for opportunistic infections. In their cohort, three people on antiretroviral treatment tested positive for tuberculosis and one recently diagnosed patient tested positive for cryptococcal meningitis.

A new study says reduced access to HIV services amid early COVID-19 closures in British Columbia was associated with a "sharp increase" in HIV transmission among some drug users.
CBC
26 Sep 22
Epidemiology

San Francisco recorded its first year-over-year increase in new HIV infections in nearly a decade in 2021, though at least some of those cases likely were in people who became infected in 2020 and only tested positive last year due to pandemic lockdowns and other restrictions that led to testing delays.
San Francisco Chronicle
14 Sep 22
Global health initiatives

In recent years, teams from MSF around the world have seen worrying signs of a reversal in progress against all three diseases, compounded by the COVID-19 pandemic and economic difficulties.
Médecins Sans Frontières
7 Sep 22
Coronavirus

Patients with uncontrolled HIV infection and severe immunosuppression may be at increased risk for chronic COVID-19 infection, potentially resulting in the emergence of new SARS-CoV-2 variants due to the accumulation of mutations and continued viral shedding. These study findings were published in Clinical Infectious Diseases.
Infectious Disease Advisor
19 Aug 22
More editors' picks