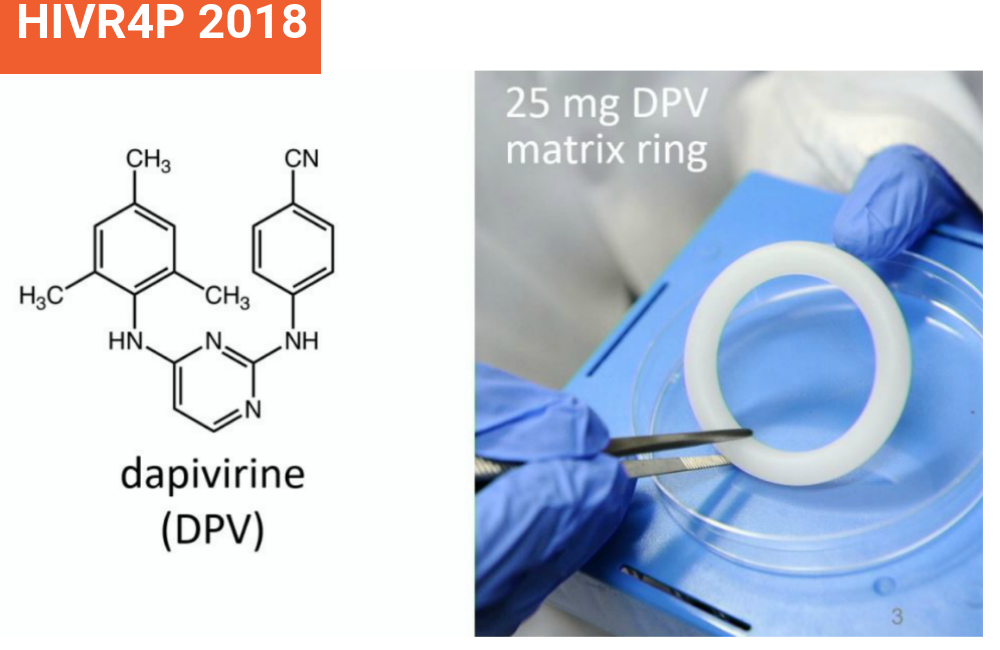 Last week’s HIV Research for Prevention conference (HIVR4P 2018) in Madrid heard a lot about oral pre-exposure prophylaxis (PrEP): not only its efficacy but also that poor retention and adherence could severely limit its impact in some populations.

There is therefore interest in injections and implants, although the lengthy persistence of drug in the body could cause problems with resistance when injectables are used for prevention.

The conference also heard promising data from studies of vaccines and broadly neutralising antibodies, but these long-lasting technologies are still at an early stage of development and finding ways to make them affordable could be a problem.

So there is still interest in topical (local) alternatives to systemic (oral or injected) PrEP that will not cause viral resistance, may be relatively easy to develop in the short term, may be preferred by some people at risk of HIV, and could easily be combined with other drugs such as contraceptives, or antibiotics against STIs.

As we have already reported, this was an issue that caused controversy at the conference. For the first time, this normally sober, scientifically focused meeting saw a stage invasion by protesters immediately before a talk by Anthony Fauci, Director of the US National Institute of Allergies and Infectious diseases (NIAID), because of fears that the US National Institutes of Health, of which NIAID is part, are intending to de-fund research lines concentrating on topical prevention options such as the vaginal ring.

Proponents of the vaginal ring and of other topical microbicides point out that retention in some PrEP trials has been very low. John Brooks of the Centers for Disease Control and Prevention mentioned a study from Atlanta which had only 15% of men initially prescribed PrEP still on it by the end of a year, including scarcely any African-American men. For women, Michel Alary's study of oral PrEP for female sex workers in Benin in west Africa found only 48% of women stayed in the study. At the last study visit, only 22% of them had levels of tenofovir in their blood that were likely to be effective and only 28% had taken any PrEP recently at all – so only one in seven women stayed in the study and remained on PrEP.

One idea to make PrEP more attractive for women is to combine an antiretroviral and a contraceptive in one vaginal ring or other device. As Nelly Mugo of the Kenyan HIV Research Institute (KEMRI) said in the pre-conference satellite on PrEP reported here, “Young women in Africa want to avoid HIV, but what they want to prevent is pregnancy. Pregnancy can have life-changing effects too, and has a higher incidence than HIV infection.”

Vaginal rings for contraception have been available for over a decade, but it is a technical challenge to combine two drugs into one. Karl Malcolm of Queen’s University, Belfast told the conference that results from the first phase I trial of a combined contraceptive/antiretroviral ring showed that the contraceptive, levonorgestrel, bound more strongly to the silicone polymer of the anti-HIV vaginal ring than the antiretroviral, dapivirine, resulting in too little of it being released.

This technical issue has hopefully been resolved and a second phase I study is now underway. This study will also look carefully at safety and other effects such as changes in menstruation; this is especially important as there were safety scares about the original contraceptive ring when it first arrived.

Rahima Benhabbour of the University of North Carolina said that 3D printing offered exciting opportunities to manufacture composite rings that have layers of different polymers in them with different drug absorbance capacities. This is an already commercial technology used to manufacture items like shoes, and could make rings in bulk. The business plan is first to make contraceptive rings for the higher-income market but with funding it should not be technically difficult to add an antiretroviral layer to the rings.

There had been some research on the acceptability of this idea around the time of the iPrEx study, but with the success of oral PrEP, enthusiasm for lubes and douches ebbed. Now, with concern about high and rising rates of STIs in the gay community, some of them associated with PrEP, the idea of a douche that could help prevent both HIV and STIs has regained traction.

One technical issue is that although men reported an average of three douche applications before sex (most used an enema bottle or shower attachment), they didn’t hold the water inside for very long (mostly for less than a minute). So a rectal douche would have to deliver drug fast to the tissues.

Ethel Weld of Johns Hopkins University reported on the first phase I study of a rectal douche, called DREAM-01 (not to be confused with the DREAM vaginal ring study). This study recruited 18 gay men for an initial safety, acceptability and drug absorption study, using a gel containing just the anti-HIV drug tenofovir as studies of this in rectal lubricants have been done before.

Previous studies had found that many common sexual lubricants caused rectal cell damage by being too concentrated. They are hyper-osmolar, which means they tend to cause cell damage by drawing the water out of them. Because of this the study tested three different douche formulations, a standard one given in two sizes of enema (220 mg and 660mg) and a more dilute formulation given in a 660mg dose.

The participants used one dose of each formulation, with a month in between doses during which blood and tissue samples were taken. Some participants had CT scans to see how far up the gut the enema travelled.

Interestingly it was the smaller enema dose that was associated with the larger number of reported adverse events, though most of these were mild and this version of the douche remained highly acceptable to participants. There were only two adverse events that the investigators judged to be caused by the gel; some bleeding in one case and a feeling of rectal discomfort and dryness in the other. Tissue biopsies showed no evidence of cell damage.

The douches achieved adequate coverage, i.e. they travelled as far up the colon as semen was likely to go.

Drug concentration inside tissue cells was ten to 1000 times in excess of that required to suppress HIV but in all cases was well below suppressive levels in blood; this means the drug in the gel gets where it needs to locally but is not absorbed systemically. This is what you want if the gel contains an anti-STI antibiotic as avoiding significant concentrations in blood is the way to avoid generating resistant bacteria.

In tests using explants, tissue cells taken from the rectum after the douche was used and then cultured with HIV, found that the tenofovir within cells suppressed HIV effectively for at least six hours and had significant effect for up to 24 hours. Viral suppression was linked to tissue concentrations, with the hypo-osmolar one achieving the highest concentrations, though this douche formulation was slightly less popular than the other two.

The conclusion is that an anti-HIV and anti-STI rectal enema/douche would be acceptable, would achieve high tissue concentrations of preventative drug for a useful period after sex, and that – at least in the lab dish – it suppresses HIV replication.

The idea of non-ARV-based microbicides is also being revised, as some of the broad-spectrum antivirals can also suppress some of the STIs too.

The griffithsin/carageenan microbicide is given as a fast-dissolving intravaginal insert. Given to ten rhesus monkeys, it completely protected eight monkeys against a high-dose vaginal challenge of HIV, though not the other two. In mice it was shown to be about 60% effective against herpes, with nine out of 15 mice protected against HSV-2 infection.

NB: Aidsmap's original report incorrectly stated that only one out of three rhesus macaques were protected by the griffithsin/carrageenan insert. We are pleased to report that the correct figure is eight out of ten.