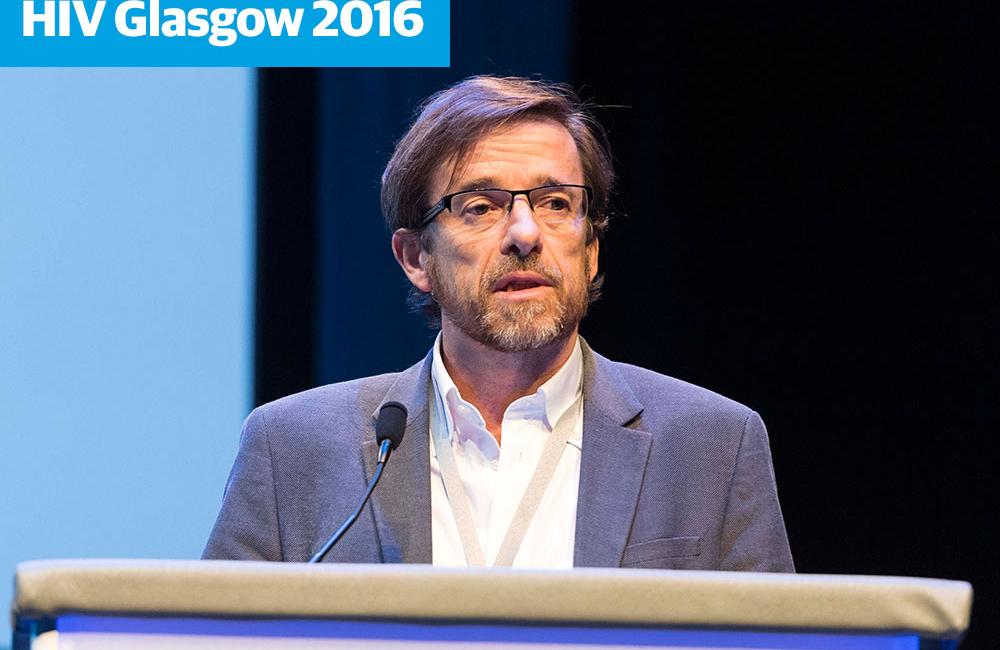 Simplifying antiretroviral therapy to a two-drug combination of lamivudine plus the protease inhibitor darunavir (Prezista) boosted by ritonavir is just as effective as a three-drug regimen in people with suppressed viral load, Spanish investigators reported at the International Congress on Drug Therapy in HIV infection (HIV Glasgow) last week in Glasgow.

Simplifying antiretroviral therapy so that a boosted protease inhibitor or an integrase inhibitor is taken with lamivudine holds several attractions:

Pilot studies presented at previous conferences have shown that regimens combining a boosted protease inhibitor (lopinavir/ritonavir) or an integrase inhibitor (dolutegravir) with lamivudine are just as effective as three-drug regimens in previously untreated people.

Studies presented earlier in the week at HIV Glasgow showed that simplified maintenance regimens in virally suppressed patients were non-inferior to three-drug treatment, both in those without any history of virologic failure and in those already taking second-line treatment.

Previous attempts to simplify therapy using monotherapy with a single boosted protease inhibitor have shown that approach to be less durable than three-drug treatment.

The DUAL study, conducted in Spain, tested simplification of a regimen containing darunavir (Prezista)/ritonavir, the only recommended boosted protease inhibitor option in European and US guidelines.

The study recruited people with no evidence of resistance to darunavir or lamivudine, who had fully suppressed viral load for at least six months on a regimen of darunavir/ritonavir plus either abacavir/lamivudine or tenofovir/emtricitabine.

Three-quarters of participants (75%) were taking tenofovir/emtricitabine and 25% were taking abacavir/lamivudine at randomisation.

The study population was 83% male, 85% Caucasian and 51% men who have sex with men, 27% heterosexual and 15% people who inject drugs. Participants had been on treatment with a fully suppressed viral load for a median of 100 weeks and the median current CD4 cell count was 589 cells/mm3 at the time of randomisation.

After 48 weeks there was no significant difference in the proportion of participants in each study arm with undetectable viral load (< 50 copies/ml), either in the entire study population or if those who stopped assigned treatment for reasons other than virologic failure were excluded.

Eighty-nine per cent of those on the simplified regimen had viral load < 50 copies/ml at week 48, compared to 93% of the triple-drug regimen group by intent-to-treat, missing equals failure analysis. More participants in the two-drug arm had missing data at week 48 but fully suppressed viral load at last clinic visit (5 vs 2%).

There was no significant difference in serious adverse events between dual and triple-drug study arms (4.8 vs 4.9%) or in study drug discontinuation due to adverse events (0.8 vs 1.6%).

No significant improvement in kidney function was observed in those who switched to the simplified regimen, nor in total cholesterol/HDL cholesterol ratio.

Presenting the results, Prof. José Arribas of Hospital La Paz, Madrid, said that results of four randomised trials of simplification of boosted protease inhibitor and lamivudine presented a good opportunity for a meta-analysis to inform future treatment guidelines, although some might wish to see evidence of longer-term durability of two-drug regimens.

Pulido F et al. Non-inferiority of dual-therapy (DT) with darunavir/ritonavir (DRV/r) plus 3TC versus triple-therapy (TT) with DRV/r plus TDF/FTC or ABC/3TC for maintenance of viral suppression: 48-week results of the DUAL-GESIDA 8014 trial. Journal of the International AIDS Society 2016, 19 (Suppl 7), abstract O331.

Changing over two decades of treatment practice can be laborious. For ViiV Healthcare, the process involves delivering long-term data to prove its two-drug HIV regimens work just well as traditional triplets over time. Now, the GlaxoSmithKline subsidiary believes it has the results to boost confidence among doctors and move closer to a major growth boost.
FiercePharma
7 Oct 20
More editors' picks