Researchers and advocates discuss the microbicides pipeline in Europe 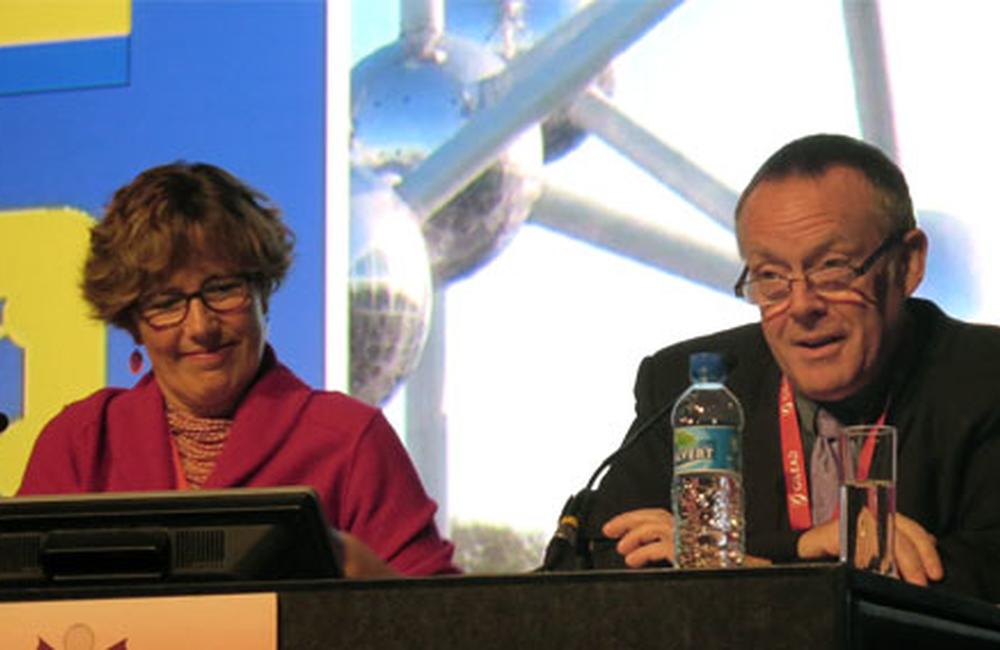 The first day of the 14th European AIDS Conference, which opened yesterday in Brussels, featured a satellite symposium on development of HIV microbicides, broadly defined to include a variety of approaches to pre-exposure prophylaxis (PrEP).

The session, sponsored by the CHAARM (Combined Highly Active Antiretroviral Microbicides) Project and the European AIDS Treatment Group (EATG), focused on the status of microbicide research in Europe, which some speakers suggested was not keeping up with research in the US and Africa.

Biomedical prevention is one of the most promising areas of HIV research, with large clinical trials recently demonstrating the effectiveness of oral Truvada (tenofovir/emtricitabine) and tenofovir vaginal gel.

The main challenge for PrEP is the need for a high level of adherence. Researchers are optimistic that different formulations and schedules of administration might help overcome this barrier. Approaches now under study include vaginal rings, long-acting injectables and oral PrEP, or gels used before or after sex rather than every day.

Sheena McCormack of the UK Medical Research Centre Clinical Trials Unit reviewed the status of biomedical prevention including a recent study of Truvada PrEP prescription in the US – which showed that nearly half of PrEP users are women – and clinical trials now or soon to be underway.

The advantages of oral PrEP include familiarity and decades of experience with adherence, McCormack explained. Topical products, on the other hand, "get where they need to go", rapidly achieving high drug levels in genital tissues whilst lower blood levels mean less toxicity. Topical products also offer more opportunity for multipurpose use, for example combining antiretrovirals and hormonal contraceptives in a single gel or ring.

For oral PrEP, the entry inhibitor maraviroc is now under study, both alone and in combination with tenofovir or emtricitabine. The IPERGAY trial is looking at Truvada PrEP taken within 24 hours after having unprotected sex rather than once daily.

Vaginal gel studies include the DAPIDAR trial, looking at the NNRTI dapivirine with or without darunavir (Prezista). Tenofovir gel – already shown to be effective for vaginal use in the CAPRISA 004 trial – is now being studied for rectal use (either daily or before and after sex) in the phase 2 MTN-017 trial, with sites in the US, Thailand, South Africa and Peru.

Other ongoing studies are evaluating vaginal rings that release antiretrovirals over time. A study presented earlier this year showed that a tenofovir ring, worn for a month, protected macaque monkeys against infection with a hybrid HIV-like virus. Two trials of vaginal rings containing dapivirine are underway in Africa and have each enrolled about three-quarters of their target number of women.

Results from most of these studies, McCormack predicted, should be available by the end of 2015 or early 2016.

Large-scale clinical trials of microbicides in different populations will be still be necessary, however, and may present challenges such as whether to use oral Truvada PrEP as a standard-of-care comparison arm.

"It's the responsibility of [researchers] to come up with better designs that will allow us to do these trials faster and find better ways to move these products through the development pipeline," McCormack concluded.

Guido Vanham of the Institute of Tropical Medicine in Antwerp followed with an overview of some of the compounds under development by CHAARM, including M48U1 CD4 mini-proteins, single-chain antibodies found in llamas, triazine NNRTIs and LEDGF inhibitors, or LEDGINs.

Many of these novel compounds target the entry, reverse transcription and integration steps of the HIV lifecycle. An advantage of novel agents is that they remain active against HIV that has developed resistance to older drugs, Vanham explained. These new compounds probably will not be used as single agents but offer potential for combination approaches.

In a similar vein, Alessandra Martini discussed the role of the European Commission in microbicide research. The European and Developing Countries Clinical Trials Partnership (EDCTP) is supporting a variety of microbicide projects both at the capacity-building and the clinical trial stages.

Janneke van de Wijgert of the University of Liverpool gave a presentation on the safety challenges of vaginal and rectal microbicides. It is important that products not disrupt the vaginal flora, or 'microbiota,' in ways that discourage friendly bacteria or encourage growth of harmful pathogens. The rectal micro-environment is "much more vulnerable" than the vagina, she explained, because it has a thinner layer of cells and is less protected by mucus. In both the vagina and rectum, inflammation increases susceptibility to HIV infection.

In an effort to do no harm, microbicide research must take into account a range of interconnected factors including the presence of other sexually transmitted infections, the role of hormonal contraception, the effects of semen and traditional practices such as vaginal washing after sex.

Harriet Langanke of the German Sexuality and Health Foundation took a turn away from the science to discuss the marketing of microbicides. To encourage adherence, she said, new products should be "at least as easily available as male condoms" and packaging should be either discreet or sexy – "something you wish to show off, like a smart phone."

Products for HIV prevention should be adaptable to individual preferences and use in a variety of settings ranging from casual encounters to sex work to long-term relationships. "When talking about microbicides we should be talking about sex and sexuality and whether these products improve pleasure," she emphasized.

Summing up, session chair Gus Cairns of EATG and NAM noted that the field is increasingly turning towards multi-purpose products that also address the need for contraception or protection against other sexually transmitted infections

The nonprofit International Partnership for Microbicides (IPM) today announced that it has voluntarily withdrawn from the US Food and Drug Administration its New Drug Application (NDA) for the dapivirine vaginal ring, a woman-controlled method for HIV prevention. This decision was made following feedback during the agency’s review that current data are unlikely to support US approval at this time given the context of the current HIV prevention landscape for women in the United States.
International Partnership for Microbicides
13 Dec 21
Vaginal rings & topical PrEP

The US FDA decision is not based on any new or additional data on efficacy or safety. WHO will continue to support countries as they consider whether to include the dapivirine vaginal ring as an additional prevention option for women.
World Health Organization
13 Dec 21
Vaginal rings & topical PrEP

As the HIV pandemic exploded in the 1980s, Stein was a powerful voice drawing attention to the needs of women. Her research and advocacy helped lead to the development of the female condom and microbicides to prevent the transmission of the virus.
Columbia University
15 Nov 21
Vaginal rings & topical PrEP

The Dapivirine Vaginal Ring: Gone far and far to go

Journalist and HIV prevention advocate Anna Miti provides context and perspective on introducing the ring in Zimbabwe, the first country where the approval of the ring has been reported in the press. Her blog explores the concrete steps that must happen next from Ministries of Health, advocates, providers, policy makers and community organizations to make the ring a reality in women’s lives.
AVAC
17 Oct 21
Vaginal rings & topical PrEP