Does efavirenz use raise the risk of suicide in people with HIV? 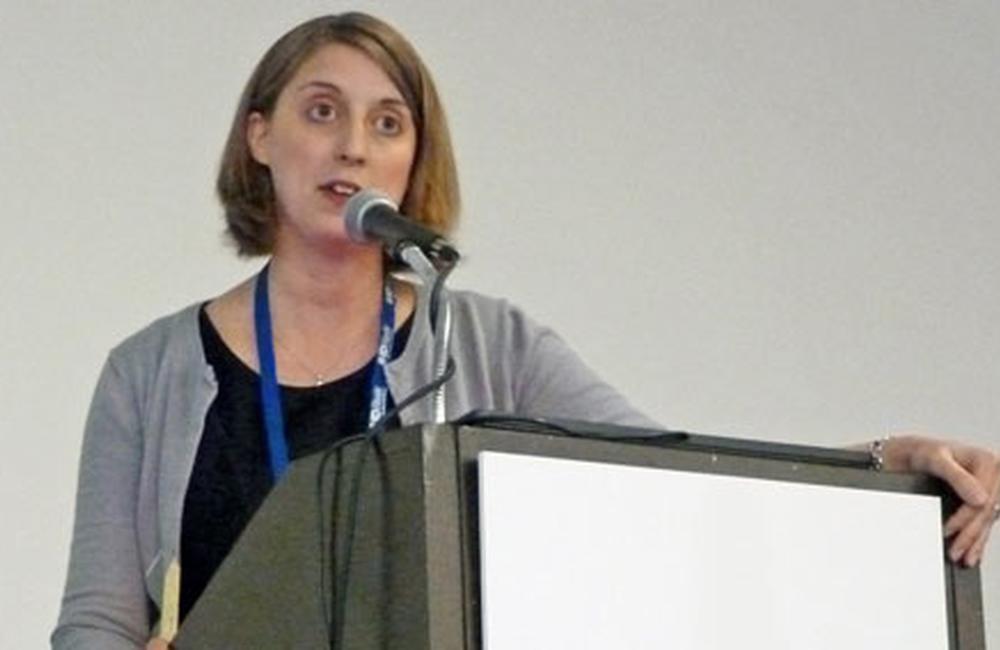 Katie Mollan, from the University of North Carolina, speaking at the ID Week Conference.
This article is more than 9 years old. Click here for more recent articles on this topic

Suicidal thoughts, attempted suicide and death by suicide were more than twice as common amongst people with HIV who started treatment with efavirenz (Sustiva or Stocrin, also in the combination pill Atripla), but the overall risk was quite low, according to a combined analysis of four ACTG trials presented on Friday at the IDWeek 2013 meeting in San Francisco.

Efavirenz has a well-known association with central nervous system side-effects that may include abnormal dreams, depression and anxiety. Several studies have reported cases of suicide amongst people taking efavirenz, but its frequency has not been determined. The Sustiva package insert states that suicide, delusions and psychosis-like behaviour have been reported amongst people taking the drug but "a causal relationship to the use of Sustiva cannot be determined from these reports".

Katie Mollan from the University of North Carolina and colleagues designed a study to estimate the incidence of 'suicidality' and compare the time to suicidality amongst treatment-naive adults with HIV who were randomly assigned to receive efavirenz-containing or efavirenz-free regimens in AIDS Clinical Trials Group (ACTG) studies conducted between 2001 and 2010. Suicidality was defined as a composite of suicidal thoughts (ideation), attempts or completed suicides.

This retrospective analysis included 3241 study participants randomised to efavirenz-containing regimens and 2091 assigned to efavirenz-free combinations. Baseline characteristics were similar in the two groups. Nearly three-quarters were men and the median age was about 36 years. About 75% were from the US; within this group, 39% were white and 36% were black. About 15% had a prior AIDS diagnosis, 8% had a history of injecting drug use, one-third had a history of a psychiatric diagnosis or psychiatric prescription, and 10% had been prescribed antidepressants.

The four trials in the analysis (A5095, A5142, A5175 and A5202) – three of which were open-label –  tested efavirenz in combination with nucleoside/nucleotide reverse transcriptase inhibitors (NRTIs) including AZT (zidovudine, Retrovir), 3TC (lamivudine, Epivir), abacavir (Ziagen), emtricitabine (Emtriva) and/or tenofovir (Viread, or with emtricitabine in Truvada); one trial combined efavirenz with lopinavir/ritonavir (Kaletra). Efavirenz-free comparison regimens included three NRTIs or lopinavir/ritonavir or boosted atazanavir (Reyataz) plus two NRTIs.

Participants were followed for a median of 150 weeks, or about three years. For two trials, the primary analysis included results up until data safety and monitoring boards recommended stopping the efavirenz-free arms due to inferior efficacy; efavirenz recipients continued treatment and follow-up through to a maximum of 184 weeks.

A total of 47 suicidality events occurred in the efavirenz-containing arms, compared with 15 in the efavirenz-free arms, during the comparison period, for event rates of 8.08 and 3.66 per 1000 person-years, respectively. The hazard ratio (HR) for suicidality was 2.28 – or more than twice the risk – in an intent-to-treat analysis and the difference was statistically significant. An as-treated analysis showed a similar pattern with a hazard ratio of 2.16.

In both groups, the incidence of suicidality rose most steeply within the first six months after starting antiretroviral therapy. Amongst people taking efavirenz, the incidence rose steadily, with another jump at around two and a half years. In the efavirenz-free group, suicidality levelled off around 30 weeks, with another increase at around two years.

Leaving out suicidal thoughts or ideation, there were 17 attempted or completed suicides amongst people randomised to efavirenz-containing regimens, compared with five amongst those taking efavirenz-free combinations. This gave hazard ratios of 2.58 for the intent-to-treat analysis and 2.30 for the as-treated analysis.

Factors significantly associated with suicidality in a multivariate analysis included use of efavirenz, younger age (HR 2.80 for age <30) and history of injecting drug use (HR 2.18). But the biggest risk factor was prior psychiatric diagnosis or use of psychiatric medications, with a hazard ratio of 3.90 – a nearly four-fold higher risk.

The researchers concluded that initial treatment with an efavirenz-containing regimen was associated with a two-fold increase in risk of suicidality and about a 2.5-fold higher risk of attempted or completed suicide.

"Suicidality was uncommon, but reported in each study and subgroup evaluated," they added.

They also noted that death from suicide, injury or unknown causes – which are sometimes combined when reporting study findings – paralleled the results for suicidality, and recommended that "careful attention should be paid to cause of death ascertainment in all clinical trials".

As a cautionary note, Joel Gallant from the Southwest Care Center observed that more reports about neuropsychiatric side-effects and suicide related to efavirenz are now coming out as the drug is about to go off patent. "Just at the time it becomes generic, people are finding a lot of reasons why we shouldn't use it," he said.