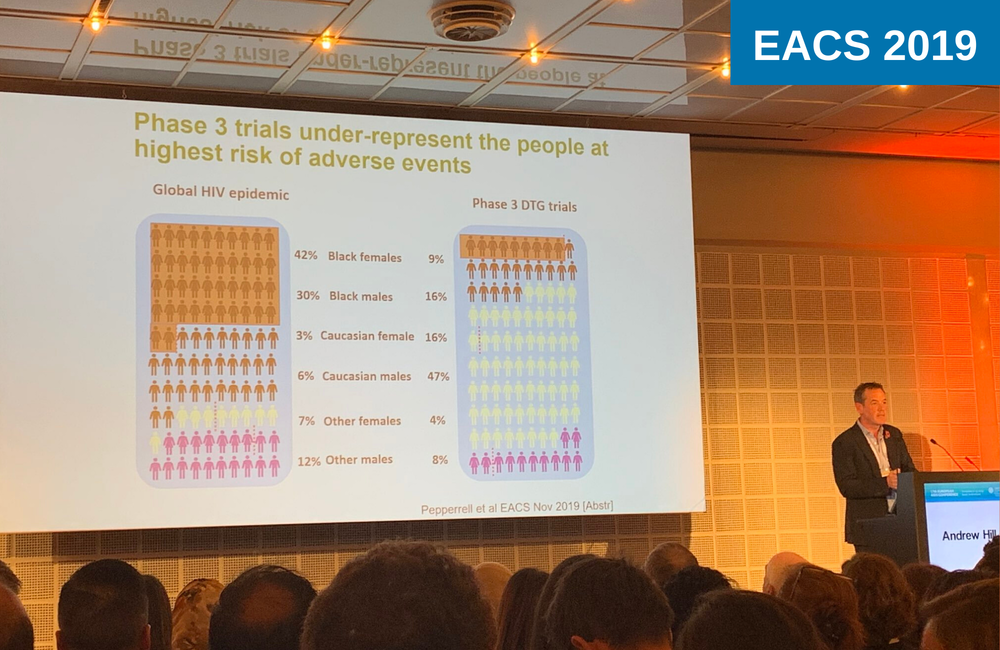 Weight gain after starting antiretroviral treatment probably has multiple causes but appears strongly linked to specific drugs, and to combinations of drugs, Dr Andrew Hill of the University of Liverpool told the 17th European AIDS Conference in Basel, Switzerland, on Thursday.

He highlighted some of the problems with the ways in which the phenomenon has been studied so far and called for greater inclusion of women and black people in clinical trials of new drugs and currently prescribed agents, so that side effects of antiretroviral drugs can be studied in different population groups.

He also reminded delegates that “we’ve been here before,” reflecting on the way in which early reports of lipodystrophy in 1997 pointed to protease inhibitors as the cause, before further research demonstrated the contribution of the nucleoside reverse transcriptase inhibitors, stavudine and zidovudine, to the syndrome of subcutaneous fat loss and central fat accumulation.

Although weight gain is partly a 'return to health' effect in people who start treatment with low CD4 cell counts and/or high viral load, there are clear differences in effect between drugs. Reviewing the evidence from trials and cohort studies to date, he pointed out that:

All these factors suggest clear differences in effects on weight between drugs, but also additive effects when drugs are used together. Dr Hill reminded delegates that the greatest gains in weight were seen in the ADVANCE trial in the arm receiving TAF, emtricitabine and dolutegravir.

Further complicating the search for a cause, the greatest gains in weight have been observed in women and black people, who are under-represented in clinical trials of new drugs. Pharmacogenetic effects (the impact of genetics on metabolism of drugs) might explain differences in weight gain. For example, central nervous system toxicity due to slower metabolism of efavirenz occurs more frequently in black people and in women.

Studies that show little weight gain after switching to an integrase inhibitor-containing regimen do not disprove the potential contribution of the drug class to weight gain, said Dr Hill, as white men are disproportionately represented in these studies. “We can expect a wide range of results from different studies,” according to the population and drugs used, he said.

“We need to calculate the potential implications of weight gain on a wide range of non-communicable diseases, in different populations."

Greater efforts to recruit black people and women to clinical trials are essential, he said. Black women make up 42% of the global epidemic and experienced the greatest weight gain in the ADVANCE study. Understanding the implications of the ADVANCE study for global treatment and for non-communicable diseases is essential.

Dr Hill noted that the QRISK diabetes risk prediction model showed that a 10kg increase in weight raises diabetes risk by 3 cases per 1000 persons treated, the equivalent of 21,000 extra cases of type 2 diabetes if 7 million people with HIV in South Africa each gained 10kg in weight.

Similarly, the higher risk of clinical obesity associated with TAF – and potential impact on cardiovascular disease, cancer, Alzheimer’s disease, adverse birth outcomes and diabetes needs to be balanced against risks of bone fractures and kidney failure associated with TDF. “We need to calculate the potential implications of weight gain on a wide range of non-communicable diseases, in different populations,” to understand the risks and benefits of using different drug combinations, he concluded.