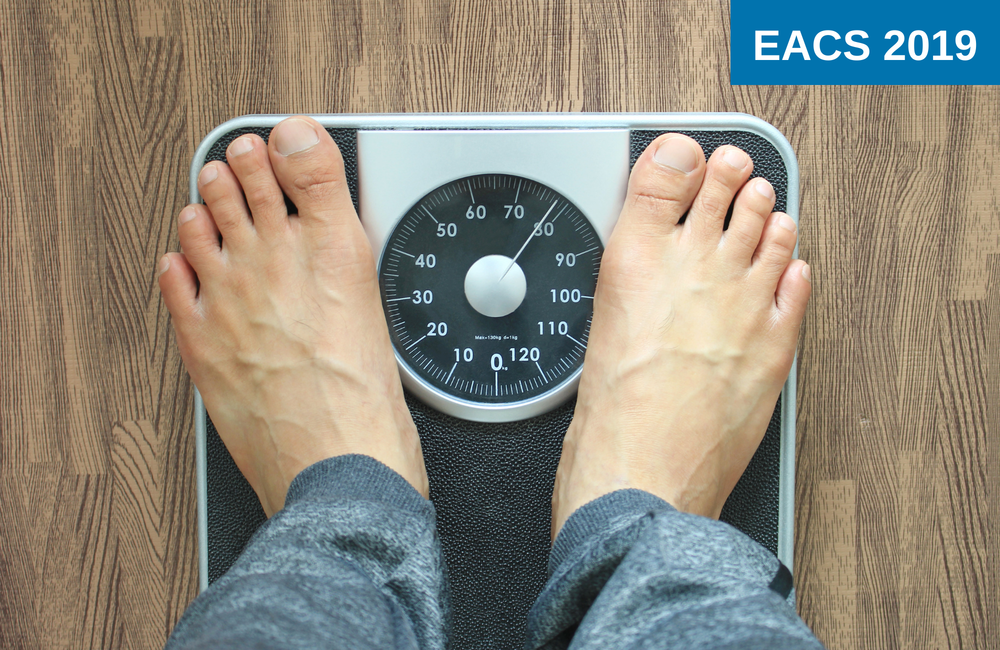 People with suppressed viral load who switched to an integrase inhibitor-based regimen experienced only small gains in weight and do not appear to gain more weight than HIV-negative people or people who continued taking other regimens, two large cohort studies presented at the 17th European AIDS Conference (EACS 2019) reported.

However, the Swiss HIV Cohort reported that people of African origin gained more weight after switching to dolutegravir, as did women, while a Dutch cohort study found that 24% of people who switched to an integrase inhibitor gained at least 5% of body weight. Substantial weight gain after switching was more likely in black women, although the number of black women in the cohort was small.

A recently published meta-analysis of eight large clinical trials found that weight gain after starting antiretroviral treatment was most strongly associated with a low CD4 count before starting treatment. The authors of that study suggested that more evidence from studies of switching treatment was needed to investigate immunological and antiretroviral predictors of weight gain. However, white men tend to be over-represented in switching studies.

Two observational cohort studies of weight changes after switching treatment were presented at the conference. Both studies looked at the effects of switching to an integrase inhibitor-based regimen. (Other weight gain studies from the conference are reported here, here and here.)

AGEhIV is a large observational cohort that monitors the long-term health of people over the age of 45 on antiretroviral treatment in the Netherlands in comparison to a control group of HIV-negative people.

"Looking at averages in switch studies may be less useful than looking at risk factors for clinically relevant weight gain of greater than 5kg."

The HIV cohort consisted of 598 people and the HIV-negative cohort of 550 people. One hundred and nineteen people switched to an integrase inhibitor-containing regimen (53% dolutegravir; 35% elvitegravir; 13% raltegravir).

The switch group was 89% white and 87% male, had been on antiretroviral treatment for a median of 12 years, had a median age of 55 years and a median body mass index of 24. As the two control groups were matched, proportions were similar in each group.

Body weight was measured twice a year, before and after switching. Throughout the follow-up period there was no significant difference in body weight changes between people who switched to an integrase inhibitor-containing regimen and matched HIV-positive and HIV-negative controls. The mean annual weight gain after switching to an integrase inhibitor was 0.17kg a year.

However, 24% of people who switched to an integrase inhibitor gained at least 5% in body weight compared with 13% of the HIV-positive control group (p = 0.012) and 12% of the HIV-negative control group (p = 0.004). Weight gain of 10% or more after switching to an integrase inhibitor occurred more frequently in black women than in other demographic groups, although the number of black women in the study cohort was small.

The Swiss HIV Cohort Study is a large observational cohort of people living with HIV receiving treatment at HIV clinics in Switzerland. Weight is measured at six-monthly clinic visits in all cohort members. Investigators analysed weight changes in people who had been virally suppressed for at least 18 months before switching to a dolutegravir-containing regimen, and who had at least 18 months of follow-up after switching.

In this cohort, 2186 people switched to dolutegravir and were eligible for analysis. (Women who were pregnant at the time of switching were excluded.) The switch population was predominantly male (75%) and white (81%), had been on antiretroviral therapy for a median of 11 years and had a median body mass index of 24 at time of switching.

Whereas women showed no difference in the rate of weight gain after switching, men gained significantly more weight (p = 0.009), although the amount gained (+0.81kg) remained modest.

The findings of both studies suggest that looking at averages or medians in switch studies may be less useful than looking at risk factors for clinically relevant weight gain of greater than 5kg, especially in cohorts that are predominantly white and male.

The risk for birth defects among infants born to HIV-positive women using antiretroviral therapy is the same as those born to women in the U.S. general population, according to a 30-year review presented at the Conference on Retroviruses and Opportunistic Infections (CROI) 2021.
POZ
27 Mar 21
Treatment guidelines

1.3m switched to new ARV, but weight gain is a concern

Two years after it was announced that the ARV dolutegravir would become part of standard first line HIV treatment in South Africa, it is finally reaching significant numbers of people. But new research about a worrying side-effect, weight gain (particularly in women), has muddied its otherwise stellar reputation.
Spotlight
25 Aug 20
Pharmaceutical industry

Mytesi, the only treatment approved by the FDA specifically for HIV chronic diarrhea, still isn’t well known among patients and doctors.
TheBody
1 May 20
More editors' picks