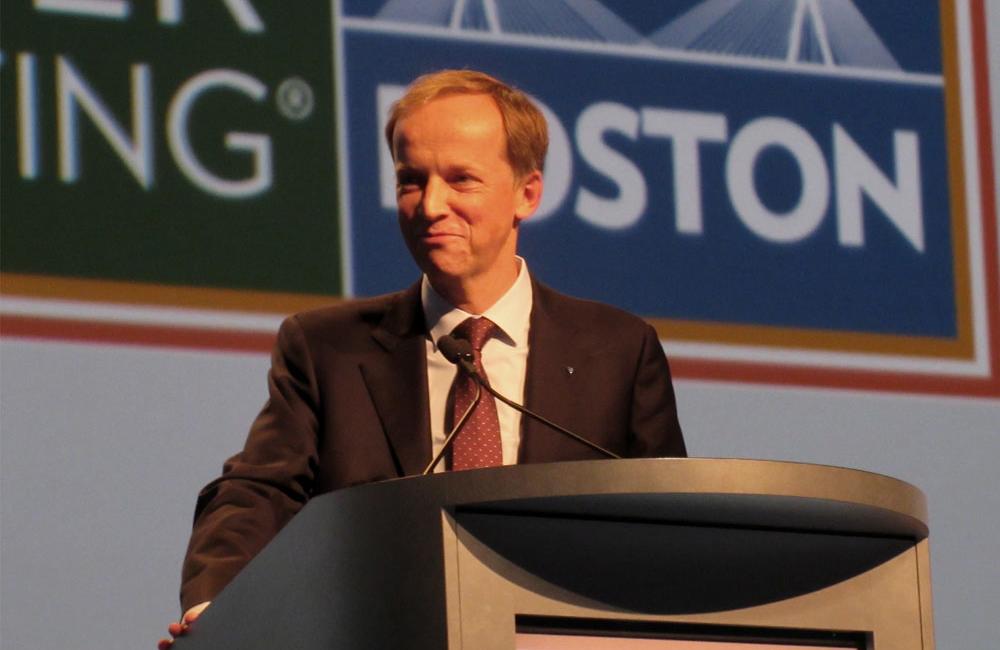 Joerg Petersen, from the University of Hamburg, speaking at the American Association for the Study of Liver Diseases (AASLD) Liver Meeting. Photo by Liz Highleyman, hivandhepatitis.com.
This article is more than 8 years old. Click here for more recent articles on this topic

People with chronic hepatitis B virus (HBV) infection are more likely to experience favourable treatment response, as indicated by hepatitis B surface antigen (HBsAg) loss, if they add pegylated interferon to tenofovir – although even then the cure rate falls short of 10%, researchers reported on Tuesday at the American Association for the Study of Liver Diseases (AASLD) Liver Meeting in Boston, United States.

Antiviral therapy using nucleoside/nucleotide analogues like tenofovir (Viread) or entecavir (Baraclude) is the mainstay of hepatitis B treatment. While antivirals are effective at suppressing HBV viral load over the long term, they rarely lead to a cure, indicated by the loss of hepatitis B surface antigen and seroconversion, or development of anti-HBs antibodies. Several studies have looked at combining antivirals with pegylated interferon – which stimulates the body's natural immune responses against HBV – but results have been inconsistent.

Hepatitis B is difficult to cure because bits of HBV DNA can integrate into the genome of liver cells (although HBV does not insert a full set of viral genetic instructions into latent cells, as HIV does). Interferon is better known as the standard treatment for hepatitis C before the arrival of highly effective direct-acting antivirals. Since HCV does not integrate its genetic material into host cells, it is now possible to cure hepatitis C with a combination of potent oral antivirals taken for as little as eight weeks without interferon, which often causes difficult side-effects.

Joerg Petersen from the University of Hamburg, on behalf of an international team of collaborators, presented findings from a study of tenofovir plus pegylated interferon alfa-2a (Pegasys or PegIntron) for chronic hepatitis B, with the primary endpoint being HBsAg loss with a finite course of treatment. Unlike most previous research, this large trial was adequately powered to compare outcomes that occur in only a small proportion of patients.

This open-label study enrolled a total of 740 people with chronic hepatitis B. Sixty per cent were hepatitis B 'e' antigen (HBeAg)-positive – which is somewhat easier to treat – while the rest were HBeAg-negative. About two-thirds were men, three-quarters were Asian and the mean age was approximately 37 years. The HBV genotype distribution reflected a largely Asian population, with most having genotype C (43%), B (28%) or D (21%). The mean baseline HBV DNA level was approximately 7.0 log10 IU/ml and the mean HBsAg level was about 3.9 log10 IU/ml. People with advanced bridging fibrosis or cirrhosis were excluded.

Participants were randomly assigned to received one of the following regimens:

Petersen reported results after 72 weeks of follow-up; patients will continue to be followed through 120 weeks. People in the arms that stopped treatment at week 48 could restart tenofovir after completing their assigned therapy if they met certain safety criteria.

At 48 weeks, 7.3% of participants taking the 48-week tenofovir plus pegylated interferon regimen showed HBsAg loss. Response rates were substantially lower in the 16-week tenofovir combination arm and interferon monotherapy arm (both 2.8%). No one taking tenofovir alone experienced HBsAg loss, even though they were the only ones who remained on continuous treatment.

HBeAg-positive participants were somewhat more likely than HBeAg-negative people to achieve HBsAg loss at week 72 (11 vs 6 patients). In both populations HBsAg loss occurred most often in the 48-week tenofovir plus pegylated interferon arm and not at all in the tenofovir monotherapy arm. Some people with HBV genotypes A, B, C and D achieved HBsAg loss, but the numbers were too small for meaningful comparisons.

Looking at HBsAg seroconversion, rates were 5.7% at 48 weeks at 8.0% at 72 weeks in the 48-week tenofovir plus pegylated interferon arm, 0.6% at both time points in the 16-week combination arm, 2.3% and 2.9% in the interferon monotherapy arm and again 0.0% in the tenofovir monotherapy arm.

Looking at the secondary endpoint of HBeAg loss, the 48-week tenofovir plus pegylated interferon arm again performed best, with rates of 25.9% at 48 weeks and 29.6% at 72 weeks. Rates in the other arms were 20.0% and 24.8% with the 16-week combination regimen, 13.2% and 25.5% in the interferon monotherapy arm, and 8.3% and 12.8% in the tenofovir monotherapy arm. HBeAg seroconversion followed a similar pattern.

Finally, turning to viral load, a majority of people in all the tenofovir-containing arms had undetectable HBV DNA at 48 weeks (68.8% with the 48-week combination, 71.2% with the 16-week combination and 60.5% with tenofovir monotherapy). Viral rebound usually occurred after stopping treatment, and the continuous tenofovir monotherapy group was the only one with a good viral suppression rate at week 72 (71.9% compared with 7.0% and 3.3% in the tenofovir combination arms). Only 21.1% of people who took pegylated interferon alone achieved undetectable HBV DNA at week 48, falling to 3.2% at week 72.

All treatment regimens were generally safe and well-tolerated. More than half of people in the arms that stopped treatment at week 48 ended up restarting tenofovir monotherapy, mostly due to resurgent viral load or liver 'flares'. Early treatment discontinuation rates were similar across arms (26-32%). Serious adverse events were reported by 10-11% of people in the interferon-containing arms and 7% in the tenofovir monotherapy arm.

"Combination therapy with [tenofovir] plus [pegylated interferon] for 48 weeks led to higher rates of HBsAg loss compared with either monotherapy in chronic hepatitis B patients without cirrhosis," the researchers concluded. They suggested that "consolidation therapy" after HBsAg loss may be important for maintaining responses.

While outcomes were clearly better with extended tenofovir plus pegylated interferon compared with either taken alone, the desired response of HBsAg loss remained unlikely.

"At the end of the day, is 7.3% that good – is it worth the effort?" asked AASLD president Adrian di Bisceglie, who chose this as one of a dozen Liver Meeting presentations highlighted at his opening press conference. "The answer is it may be, but the real answer is we need new treatments for hepatitis B."

Di Bisceglie also noted that people with hepatitis B "on average seen to tolerate pegylated interferon better" than those with hepatitis C, though we don't understand why.