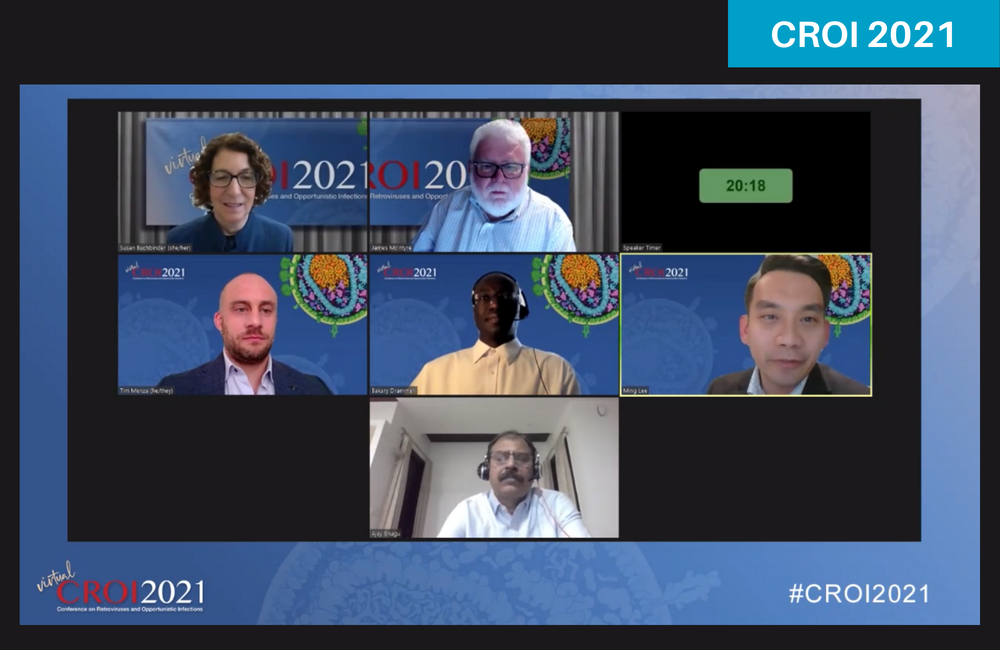 Higher rates of hospitalisation or worse outcomes after admission for COVID-19 in people living with HIV are partially explained by underlying health conditions, especially heart disease and kidney disease, two studies from the United Kingdom and the United States have found.

But whereas British research found that the higher risk of COVID-19 in people with HIV was entirely attributable to underlying health conditions and greater physical frailty, the US study found a small but statistically significant increase in the risk of hospitalisation for COVID-19, even after controlling for some underlying conditions. Differences in methodology may explain the differing conclusions – whereas the British study matched cases in people with HIV to cases in the rest of the population to reduce distortions, the US study looked at outcomes for people with HIV within a much larger sample, but without matching.

The studies were presented this week at the 2021 virtual Conference on Retroviruses and Opportunistic Infections (CROI).

Dr Ming Lee of Guy’s and St Thomas’s Hospital, London, reported the findings of the RECEDE study, designed to look carefully at the effects of HIV status on COVID-19 outcomes in people living with HIV. The study matched people living with HIV admitted to hospital with COVID-19 up to 31 May 2020, with HIV-negative people by hospital, age, gender, COVID-19 diagnosis date and deprivation index. The study matched people admitted at six hospitals in London, Leicester and Manchester.

The primary outcome of the study was the time to improvement in COVID-19 status or discharge from hospital, within 28 days of hospital admission. Improvement was measured on a 7-point scale, from death or palliative care, to not hospitalised and able to resume normal activities. Improvement was defined as a change of at least two points on the scale.

The researchers looked at all admissions between 1 February and 31 May 2020 and identified 69 people living with HIV among 6612 people admitted to the six hospitals with COVID-19. These people were matched with 181 HIV-negative people (one person with HIV could not be matched).

People with HIV were significantly more likely to be Black or of minority ethnicity (75 vs 49%, p = 0.0002), and had a higher median clinical frailty score. There was no difference between people with HIV and the control group in the frequency of severe illness requiring oxygen or mechanical ventilation.

People with HIV had been diagnosed with HIV for a median of 14.8 years, the median CD4 count was 352 cells and all but two had viral load below 200.

However, in a multivariable analysis that adjusted for confounding factors including body mass index, clinical frailty, hypoxia at admission, ethnicity, duration of symptoms prior to diagnosis, hypertension, diabetes and chronic kidney disease, HIV status ceased to be a risk factor for lack of improvement.

"When people with HIV are admitted to hospital with COVID-19, it’s important not just to consider their HIV status, but the broader picture of comorbidities."

Dr Lee stressed the importance of appropriate matching in case-control studies to help clinicians understand which people with HIV are at greater risk of worse COVID-19 outcomes.

“People with HIV often have co-morbidities and greater frailty, so that could be contributing to their greater risk,” he told a question-and-answer session after his presentation. “When people with HIV are admitted to hospital with COVID-19, it’s important not just to consider their HIV status, but the broader picture of co-morbidities.”

“If someone has got well-controlled HIV, that should weigh a lot less strongly compared to other co-morbidities that might be contributing to their risk,” he concluded.

Dr Jing Sun of Johns Hopkins University, Baltimore, reported on the risk of severe COVID-19 outcomes in people with HIV and people who received solid organ transplants at 39 hospitals in the United States. The study was designed to compare the risks of severe COVID-19 in two groups of people with immunosuppression and the wider population, and to determine if COVID-19 has a similar impact regardless of the cause of immunosuppression.

The total study population comprised 509,092 cases of COVID-19 diagnosed by PCR or antigen testing between 1 January 2020 and 6 February 2021. The researchers calculated the risks of hospitalisation and mechanical ventilation, according to immunosuppression status.

Several co-morbidities raised the risk of hospitalisation in people living with HIV. People with a history of heart attack were around 60% more likely to be hospitalised, while stroke and pulmonary disease increased the risk by around 50% and vascular disease by 43%. The greatest increase in risk was associated with congestive heart failure and chronic kidney disease, both of which more than doubled the risk of hospitalisation (odds ratios 2.27 and 2.28 respectively). All these differences were statistically significant. Liver disease, diabetes and cancer did not increase the likelihood that people with HIV would be admitted to hospital.

Dr Sun said that although the effect of HIV on risk of hospitalisation weakened when the analysis was adjusted for the presence of co-morbidities, they still found that people with HIV in the United States were at increased risk of severe COVID-19 outcomes.

Lee M et al. Clinical outcomes of patients with and without HIV hospitalized with COVID-19 in England during the early stages of the pandemic: a matched retrospective multi-centre analysis (RECEDE-C19 study). HIV Medicine, 23: 121-133, February 2022.

Sun J et al. COVID-19 hospitalization among people with HIV or solid organ transplants in the US. Conference on Retroviruses and Opportunistic Infections, abstract 103, 2021.