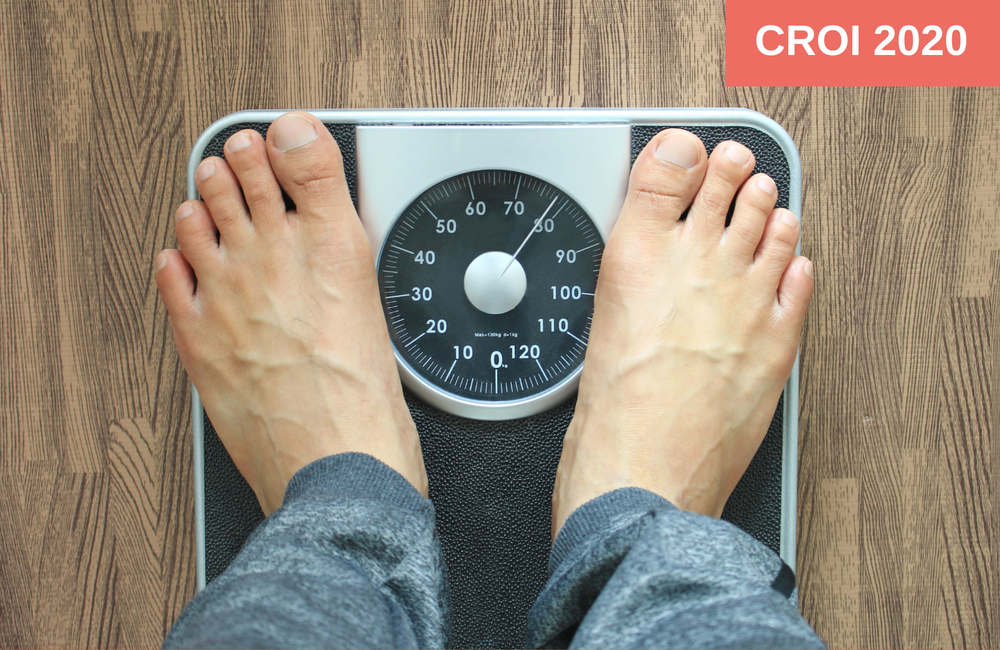 Weight gain after starting antiretroviral treatment may be influenced by genetic factors but is not influenced by metabolic rate or changes in food intake, research presented at last week’s Conference on Retroviruses and Opportunistic Infections shows.

Substantial weight gain after starting treatment has been reported in many studies since the introduction of integrase inhibitor-based treatment.

Professor Jacqueline Capeau of Université Sorbonne, Paris, summarised what is known about risk factors for weight gain. In people starting treatment for the first time, a low CD4 count, high viral load and low body mass index are major risk factors. The integrase inhibitors dolutegravir and bictegravir are more strongly associated with weight gain than other drugs of the same class, while the newer formulation of tenofovir (tenofovir alafenamide, TAF) is also associated with weight gain. Tenofovir disoproxil fumarate and efavirenz may protect against weight gain. Women and black people are at greater risk of weight gain.

In people with suppressed viral load who switch to a new regimen, weight gain is associated with a higher body mass index and greater age, and with regimens including dolutegravir and/or TAF. Once again, women and black people are at greater risk of weight gain.

Do metabolic rate and appetite change after starting treatment?

Is fat gain after starting antiretroviral therapy a consequence of improved appetite or a reduction in metabolic rate owing to suppression of HIV?

Dr Allison Ross Eckard and colleagues enrolled 30 people with HIV about to start treatment and measured caloric intake and metabolic rate at baseline and six and 12 months after starting treatment (28 with an integrase inhibitor-based regimen, including 16 with dolutegravir, and 12 with TAF). Despite no changes in resting metabolic rate, caloric intake or oxygen consumption, participants gained an average of 15.7kg after 12 months, including 7.6kg of fat. There was no difference in weight gain between people who took dolutegravir and those who did not, nor between people who took TAF and those who did not.

The study investigators concluded that antiretroviral treatment had not encouraged increased appetite, changed eating habits or affected metabolic rate in participants. However, they also found that pre-treatment metabolic rate was associated with fat gain, suggesting that it may play a role in subsequent weight gain. The study will continue to recruit further participants to explore these questions.

However, an Italian group led by Dr Giovanni Guaraldi followed 304 patients between 2007 and 2019, measuring weight, physical activity and calorie intake and found that substantial weight gain after four years of treatment was largely attributable to higher pre-treatment weight and lower physical activity. They found no relationship to integrase inhibitor treatment, but a strong contribution of a high CD4/CD8 ratio, suggesting an immunological contribution to weight gain.

Are weight gain and neuropsychiatric effects of dolutegravir linked?

As well as weight gain, dolutegravir has also been associated with several neuropsychiatric side effects including insomnia, headaches, anxiety and depression in observational studies. Japanese researchers investigated whether weight gain and neuropsychiatric side effects might be influenced through the same pathway, a variation in the resistin gene that influences insulin sensitivity in peripheral tissues and the central nervous system.

The Japanese group compared body mass and neuropsychiatric symptoms in 220 people taking an integrase inhibitor (81 dolutegravir, 47 elvitegravir, 92 raltegravir) and 62 taking a protease inhibitor, all of whom were taking HIV treatment for the first time.

A second study looking at the relationship between genetic markers and weight gain after starting treatment found that a variation in the gene which governs the rate of efavirenz metabolism was associated with the extent of weight gain in people who received efavirenz in the ADVANCE study.

As fully reported in another article, this study found that having a genetic predisposition to metabolise efavirenz slowly, leading to higher drug levels, was associated with less weight gain. The findings suggest that the widespread use of efavirenz in first-line treatment may have contributed to lower weight gain after starting treatment and that use of other regimens could reveal an effect that is not so much drug-related as immune restoration-related.