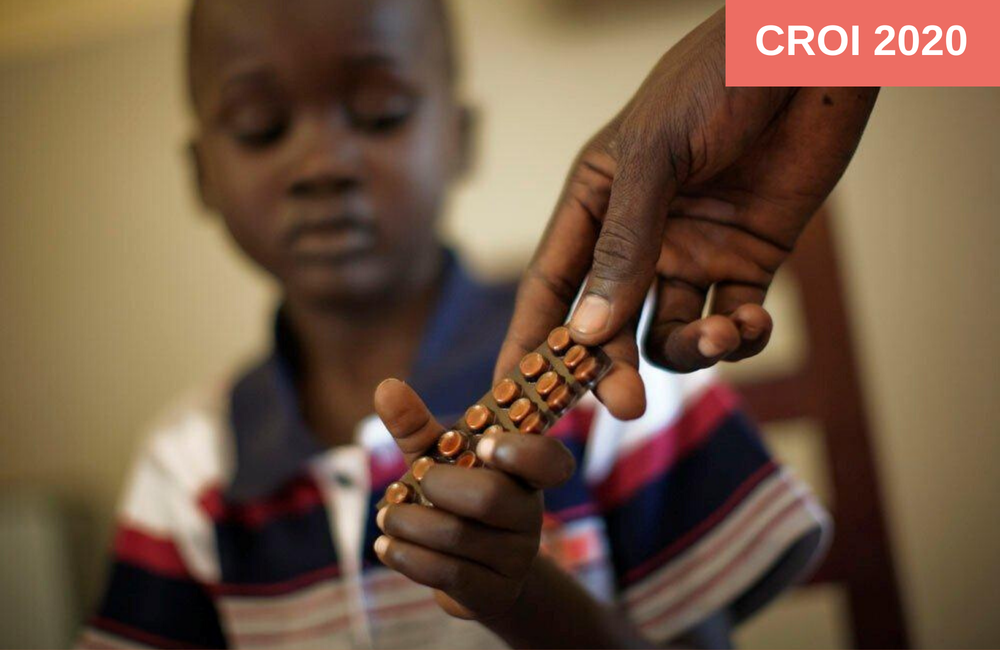 8mg/kg of abacavir given twice daily to normal- and low-birth-weight newborns with HIV in South Africa was safe and effective according to presentations in a session on new approaches to paediatric dosing at the Conference on Retroviruses and Opportunistic Infections (CROI 2020) last week. Another study supported the doubling of the dose of dolutegravir for children with HIV/TB co-infection who are taking rifampicin.

World Health Organization (WHO) guidelines recommend abacavir in liquid form as part of the preferred first-line regimen in children aged 28 days and above, but there is no approved dose for children under three months of age. A recent report from the United Kingdom concerning abacavir prescribed at 2 to 8mg/kg in routine care in infants under three months of age had no safety concerns.

Drug metabolism is reduced in newborns. No pharmacokinetic (how the drug is absorbed, distributed, metabolised and excreted) data for abacavir are available for infants of normal- (less than 2.5 to 4kg) or low-birth weight (under 2.5kg). Women living with HIV are at increased risk of delivering low-birth-weight infants.

Infant characteristics and safety data were collected before starting the regimen and seven times after. Blood was sampled at five visits, usually once before and twice after a dose.

The clinician chose the abacavir dose. The median dose was 10mg/kg twice daily, ranging from 6 to 13mg/kg.

This shows that exposure to abacavir was higher during the first three months of life compared with older children, but rapidly decreased as the infants developed.

The 14 grade 3/4 adverse events were assessed as unrelated to abacavir.

Dr Cressey concluded that abacavir dosed at 8mg/kg twice daily was well tolerated in infants under three months of age.

A second study also looked at abacavir safety and efficacy, this time among infants in nine South African observational cohorts from the IeDEA Southern Africa collaboration.

Infants under three months of age who started ART between 2006 and 2017 were included. In this real-life retrospective study, the authors looked at the proportion discontinuing abacavir and the proportions with viral suppression at six and 12 months compared to those who started zidovudine-containing regimens.

Abacavir discontinuations and viral load suppression at 6 and 12 months were not significantly different in infants starting ART aged < 28 days and ≥ 28 days, or in infants weighing < 3 and ≥ 3kg. Fewer discontinued abacavir compared to zidovudine.

Eight per cent of infants discontinued abacavir at a median of 13 months. Reasons were available for 41% and included transferring to another clinic, treatment failure, stockouts, hypersensitivity and lipodystrophy.

The TB medication rifampicin reduces the efficacy of dolutegravir, known as the induction effect of rifampicin. In HIV/TB co-infected adults on dolutegravir-based ART this interaction can be overcome by doubling the dolutegravir dose (50mg twice a day instead of once daily). Until now, no data have been available to support this strategy in children.

Dr Hylke Waalewijn presented findings on behalf of the ODYSSEY Trial Team showing that dolutegravir (50mg) given twice daily with rifampicin was safe and sufficient to overcome the induction effect in children aged 6 to 18.

The authors undertook a PK sub-study to look at the effect and safety of rifampicin on dolutegravir plasma concentrations in children, taking either a twice-daily weight appropriate dolutegravir dose with rifampicin, or oncedaily dolutegravir without rifampicin.

Safety analysis included 31 children with a median age of 12.2 (5.9-17.6) years. Just over half were male and were followed for a median of 31 (28-40) weeks. There were 13 adverse events, which independent reviewers determined to be unlikely to be linked to dolutegravir.

PK analysis included 17 children. Doubling the dolutegravir dose combined with rifampicin resulted in AUC0-24  and Cmax (highest concentration of drug in the blood measured after a dose) that were comparable to dolutegravir given without rifampicin.

The inducing effect of rifampicin increased clearance of dolutegravir as expected: CL/F: 1.36 and 2.05 for dolutegravir 25 and 50mg, respectively.

Results were comparable for both younger and older children.

Waalewijn concluded that the data support doubling the dose of dolutegravir for children treated for TB with rifampicin. He added that embedding PK and drug interaction sub-studies in phase II/III paediatric trials accelerates getting key data to treat children in a timely manner.

Adults with HIV are approaching the global target of 95% viral suppression, but there is much slower progress among children and adolescents, a study published in Lancet HIV reported. According to the retrospective cohort study, significant efforts are needed to reach the viral suppression target for children and adolescents.
American Journal of Managed Care
13 Dec 21
Epidemiology

A child was infected with HIV every two minutes in 2020

The risk for hypertension among adults with perinatal HIV infection does not appear to be increased by most traditional or HIV-related risk factors, according to results of a study published in HIV Medicine.
Infectious Disease Advisor
18 Nov 21
Access to healthcare