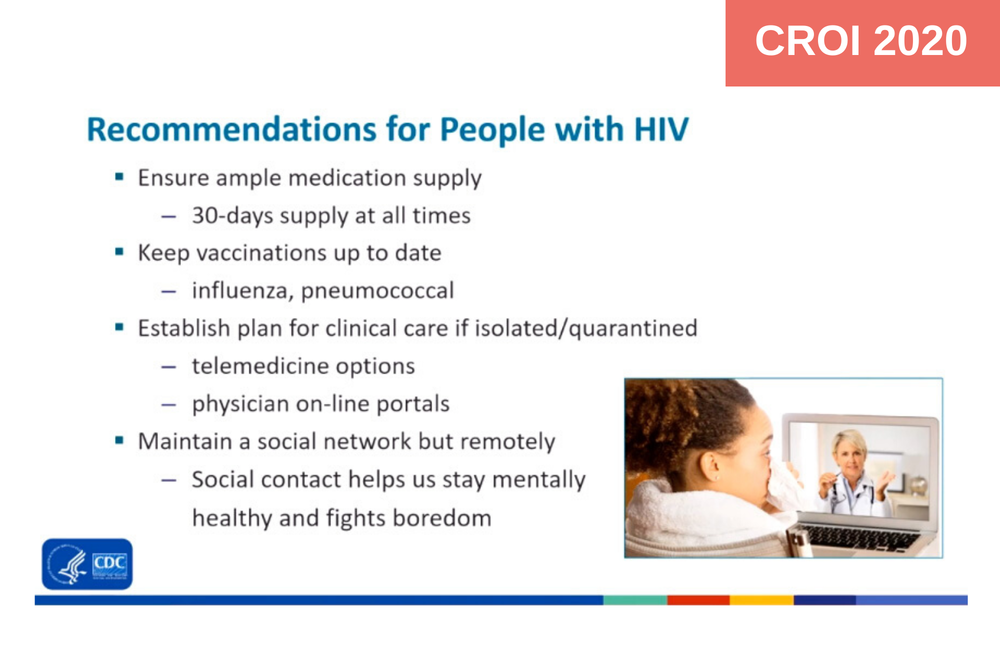 Public health officials from the United States and China gave updates about the epidemiology and response to the new coronavirus this week at the Conference on Retroviruses and Opportunistic Infections (CROI 2020). They said that while there are no data so far on coronavirus in people with HIV, the risk might be elevated in those with low CD4 counts and those without consistent access to HIV treatment.

CROI sessions were presented virtually via webcast after the in-person meeting in Boston was cancelled due to the growing crisis.

As of 12 March, the World Health Organization (WHO) reports that there have been approximately 125,000 cases of COVID-19, as the respiratory illness caused by the virus is known, reported in 117 countries worldwide, resulting in about 4600 deaths.

While most people infected with the novel coronavirus – officially named SARS-CoV2 – will have mild illness, around 20% develop more serious disease. Older people, individuals with underlying health conditions and those with compromised immune systems are at higher risk of developing severe complications.

Dr Zunyou Wu of the Chinese Center for Disease Control and Prevention (CCDC) gave an overview of the timeline of the outbreak in Wuhan, China, where the epidemic first emerged.

Eleven days after three unusual cases of pneumonia in the same family were reported to the CCDC on 27 December, SARS-CoV2 was identified, and within days the virus was sequenced and the first PCR test kits were distributed. The city of Wuhan was shut down on 23 January followed by a 'cordon sanitaire' for Hubei province that covered 59 million people.

"It was a new virus and we had no immunity, no treatment, no vaccine and no magic ways to control it," Wu said. "All we used were fundamental public health measures." He estimated that these efforts prevented at least one million cases in China.

A majority of cases in the Wuhan outbreak arose from close contact and often occurred in family clusters, Wu reported. He said virus shedding can occur 24 to 48 hours prior to symptom onset and is highest early in the course of disease. Shedding usually continues for 7 to 12 days in mild cases, but can last more than 2 weeks in severe cases.

The average time from exposure to symptom onset was 5 to 6 days. At diagnosis, 80% of cases were mild, 15% were severe and 5% were considered critical. Amongst those with mild disease, 10 to 15% progressed to severe illness, and of those, 15 to 20% became critical.

Fever is the most common symptom, occurring in about 80% of patients, while around 40% develop a cough. Many people with mild illness have few symptoms, though Wu said true asymptomatic infection "appears to be rare." Later in the disease, patients are more likely to have difficulty breathing and may develop pneumonia. Recovery time averaged 2 weeks for mild cases and up to 6 weeks for severe cases.

However, as described by Ralph Baric of the University of North Carolina, COVID-19 can progress to acute respiratory distress syndrome, which occurs when damaged air sacks (alveoli) in the lungs can no longer adequately exchange oxygen, potentially leading to hypoxia (low oxygen levels), organ failure and death. In addition, further lung injury is caused by the immune system's response to the infection. Pulmonary fibrosis, or development of scar tissue, may leave lasting damage even after a person recovers from the infection.

Responding to questions from the virtual audience, Baric said it is not yet clear whether infected people develop immunity (and if so how long it lasts), whether the virus establishes long-lasting reservoirs in the body, or whether reinfection can occur (there have been some reports of this, but it seems to be infrequent).

Dr John Brooks of the US Centers for Disease Control and Prevention discussed the spread of the coronavirus outside China. "Widespread rapid dissemination in our hyper-connected world creates real-time challenges" when it comes to predicting the course of the epidemic, he said.

New COVID-19 cases peaked in China in early- to mid-February and then declined dramatically. The epidemic then began to ramp up elsewhere in the world. As of 25 February, new cases outside China have exceeded those reported within China, and on 4 March, the number of deaths elsewhere exceeded those in China.

Brooks discussed SARS-CoV2 transmission, noting that infection mainly spreads through respiratory droplets in the air – such as those released when a person coughs or sneezes – that land on surfaces. The virus can then be transmitted when someone touches these surfaces and transfers it to their mouth, nose or eyes. The virus is detectable in stool, but faecal spread is "unlikely at this time," according to Brooks. Perinatal transmission has not been seen, and the virus has not been detected in amniotic fluid or breast milk.

Brooks emphasised that severe illness is most likely to develop amongst people of advanced age and those with co-existing conditions including hypertension, diabetes, cardiovascular disease or chronic lung disease. In fact, in China, mortality approached 16% for people age 80 or older. But unlike some other respiratory viruses, which are deadly in both young children and elderly people, COVID-19 is uncommon in children and their symptoms are generally mild.

The overall mortality rate for COVID-19 will likely be in the range of 0.5 to 3.5%, making it five to 35 times more deadly than the seasonal flu, which has a mortality of around 0.1%, according to Brooks. "How many people die depends on how quickly the disease can be detected and treated," he said.

There is no specific data so far about COVID-19 in immunocompromised people, but by analogy with other respiratory viruses, they may be more likely to have severe disease.

Amongst people living with HIV – many of whom are age 50 or older and have co-existing conditions – the risk is likely to be greatest for those with low CD4 cell counts and those who are not on antiretroviral therapy with full viral suppression, Brooks said. Nevertheless, he advised that all people with HIV take precautions as this is a new virus and much remains to be learned.

Brooks' recommendations include ensuring at least a month's supply of medications, keeping up to date with flu and pneumococcal pneumonia vaccines, and establishing a plan for clinical care if isolated or quarantined. Finally, he advised, "Maintain a social network, but remotely – social contact helps us stay mentally healthy and fights boredom." He also urged the HIV community to use its experience to fight the stigma now emerging around the coronavirus.

Dr Baric and Dr Anthony Fauci of the US National Institute of Allergy and Infectious Diseases (NIAID), one of the leaders of the epidemic response in the United States, both reviewed emerging treatments for COVID-19 and a potential coronavirus vaccine.

Viral shedding refers to the expulsion and release of virus progeny (offspring such as competent particles, virions, etc.) following replication. In HIV this process occurs in the semen, the vaginal secretions and other bodily fluids, making those fluids more infectious.

There are currently no approved drugs, immune therapies or vaccines against any group 2b coronaviruses, the category that includes SARS-CoV2, according to Baric. Nonetheless, said Fauci, "antivirals, monoclonal antibodies and other agents are being developed and tested in real time, literally as we speak." He noted that WHO's international clinical trials registry includes 260 studies related to COVID-19.

The HIV antiretroviral combination lopinavir/ritonavir (Kaletra) has been used with interferon beta to treat other coronaviruses and has shown activity against SARS-CoV2. It is currently under study in China.

Gilead Sciences' nucleotide analogue remdesivir (also known as GS-5743), originally developed to treat Ebola virus, is furthest along in the pipeline. Early studies showed that it improves respiratory function in aged animals with a related coronavirus.

Remdesivir is being given to some people with severe COVID-19 on a compassionate use basis and it is being studied in patients with mild, moderate and severe disease in clinical trials in China and the United States – one of which includes people evacuated from the ill-fated Diamond Princess cruise ship.

Other therapies under study include chloroquine (used to prevent and treat malaria) and the experimental nucleoside analogue EIDD 1931.

NIAID's Vaccine Research Center is collaborating with Moderna and the Coalition for Epidemic Preparedness to develop a COVID-19 vaccine. Researchers created an mRNA vaccine candidate that targets the spikes on SARS-CoV2, a product was shipped to clinical trial sites in February and testing is expected to begin in about two months, Fauci said. He noted this is the fastest-ever progression from sequence selection to a clinical trial.

Several other vaccine candidates are in early stages of development. Fauci predicted that the soonest a vaccine could be available for wide use would be 12 to 18 months.

Wu Z. Outbreak of COVID-19 in China and the country's responses. Conference on Retroviruses and Opportunistic Infections, abstract 2006, March 2020.

Watch the webcast of the COVID-19 session on the conference website.