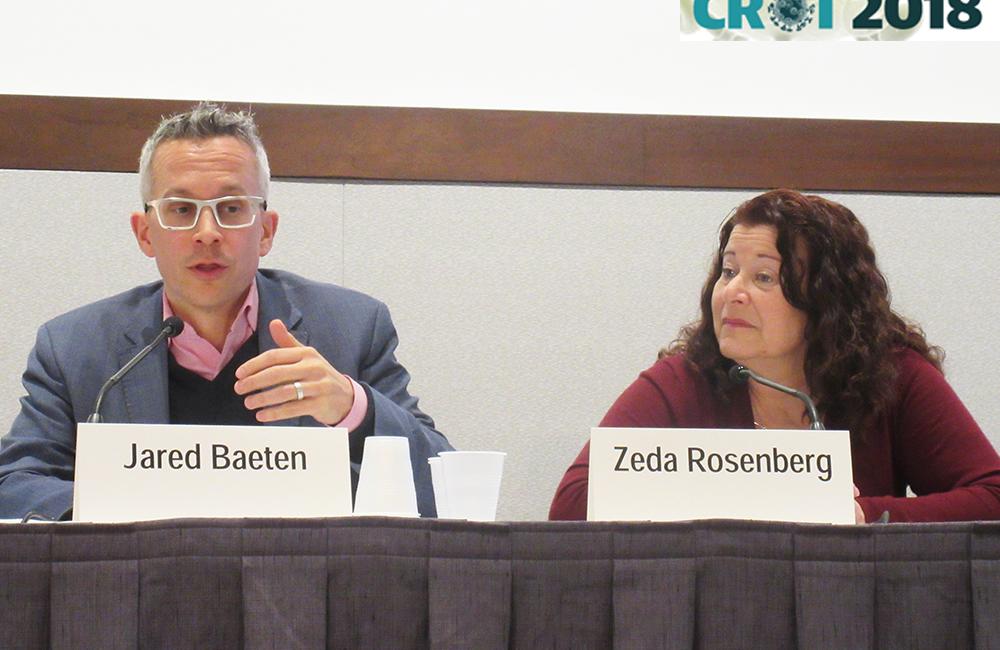 Two open-label, parallel studies of vaginal rings used to prevent HIV in women released interim results at the 25th Conference on Retroviruses and Opportunistic Infections (CROI 2018) in Boston yesterday. Although, as open-label studies, there was no placebo arm and so no direct comparison with no intervention, the researchers estimated that in both studies there were 54% fewer HIV infections than there would have been on a placebo.

The two studies, MTN 025 or HOPE, and IPM 032 or DREAM, are open-label extensions of the two randomised, placebo-controlled studies of the vaginal ring, the ASPIRE or MTN 020 study, and the Ring or IPM 027 study, whose results were first presented at the previous Boston CROI in 2016. These two studies reported an effectiveness of 27% and 31% respectively, so the estimated interim results announced today are a considerable improvement.

However, adherence may fall off over time, so the final effectiveness results, which will be published in a year’s time, may be lower.

The vaginal ring is a silicone polymer ring containing 25mg of the non-nucleoside anti-HIV drug dapivirine, which has never been developed as an oral drug. Designed to be changed monthly, it sits on the cervix rather like a diaphragm, and dapivirine diffuses out. After a month’s continuous use, there should be about 21mg of dapivirine left in the ring if use has been continuous.

Jared Baeten of the Microbicide Trials Network made a comparison with oral pre-exposure prophylaxis (PrEP). He pointed out that in the original iPrEx study of PrEP, effectiveness had only been 44%, but that it had been 50% in the open-label extension study and 100% in people who took four or more doses a week. Further PrEP studies and demo projects had been needed to demonstrate its extremely high efficacy in circumstances where adherence was high. The vaginal ring studies had essentially just started the second stage of this process, he said.

The two studies are very similar. HOPE has 1407 participants, started in August 2016 and is due to end in October 2018; DREAM has 900 participants, started a month earlier and will end by December 2018. DREAM is taking place in six sites in South African and Uganda; HOPE has 14 sites and adds sites in Malawi and Zimbabwe to the other two countries.

There were some differences in the trial populations. DREAM participants were slightly younger than HOPE participants, with an average age of 29 rather than HOPE’s 31, and 27% were below 25 compared  with 13% in HOPE.

Far more women in HOPE were married – 53% compared to only 14% in DREAM. This may be due not only to having a slightly older participant group, but also because there were more sites outside South Africa: in that country, among the legacies of apartheid is high levels of migrant work and transience and consequently low levels of marriage.

There were high levels of sexually transmitted infections (STIs) diagnosed in the women in both studies – 16% had an STI at baseline in HOPE and 18% in DREAM – and Jared Baeten said that in HOPE, only 44% of women said they had used condoms the last time they had sex.

Recruitment and retention were generally good. In both studies, women who had been in ASPIRE and the Ring Study were invited to join the open-label extension, and 57% of those in ASPIRE did join HOPE. Participants were told they were free to stop using the ring whenever they wanted, but retention was very good; 98% of the woman attended arranged appointments. Ten per cent of women had decided not to use the ring by the end of the first month, but after that retention was steady, with only 1% reductions in participants at the ends of months two, three and six. Between month six and nine there was a 5% drop, meaning that by month nine 81% of baseline participants were still attending appointments.

Adherence appeared to be high. In both studies, researchers used the maximum residual level of 23.5mg of dapivirine at the end of the month to indicate “at least some” use of the ring. They chose this measure because it had been established that any less use than this would be unlikely to have any efficacy. The full results published next year will stratify users by adherence and relate adherence to efficacy rates, Baeten said.

Adherence rates judged by the measure of residual drug were higher than in ASPIRE and the Ring Study in both open-label studies. In HOPE, 89.5% of women had levels of drug lower than 23.5mg in returned rings, compared with 77% in ASPIRE, and in DREAM, 96%, compared with 83% in the Ring Study.

So far, there have been 12 HIV infections in HOPE in 616 woman-years of participation, and eleven in 623 woman-years in DREAM. This corresponds to annual HIV incidences of 1.9% and 1.8% respectively.

How does this translate into prevention effectiveness? There are no placebo arms in the studies. The annual incidence in the placebo arm of ASPIRE was 4.5%, but although these are some of the same women, they are older now so could be less sexually active, and community prevalence rates and antiretroviral therapy use in partners could both have changed. A ‘handful’ of participants also started PrEP during the studies, Zeda Rosenberg of IPM said.

When the incidence rates seen in the placebo groups in the original studies were adjusted this way, they came up with an ‘expected incidence’ on placebo of 4.1% in HOPE and 3.9% in DREAM. The reduction in infections seen in women using the ring, compared with these incidences was 54%, in both studies. So, in both studies, the ring stopped more than half the HIV infections that would otherwise have occurred.

As Rosenberg pointed out, this compares favourably to the effectiveness seen in the iPrEx Open-Label Study. In that study, there were no HIV infections in the men with highest adherence – and clearly it is hoped the same will be true of the ring studies. The characteristics of women with high adherence can then be analysed to discover how to help other women use the rings effectively, she said.

Update: The final results of this study were published in a peer-reviewed journal:

Update: The final results of this study were published in a peer-reviewed journal: