Scotland reports its lowest number of HIV diagnoses since 2003 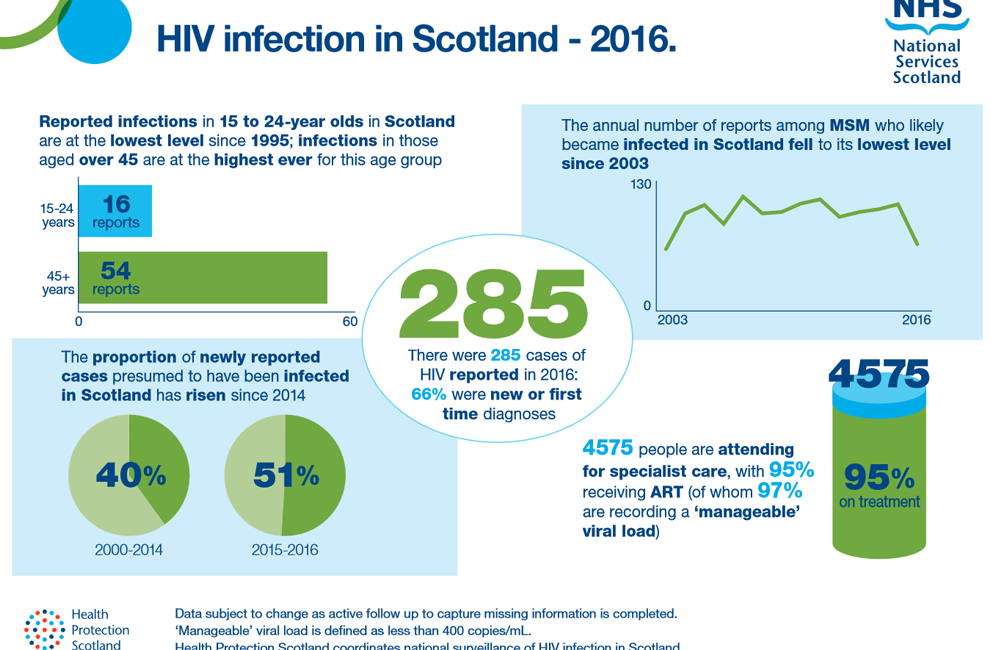 A report released on Tuesday by Health Protection Scotland shows that 2016 saw the lowest number of people diagnosed with HIV within Scotland since 2003.

Last year, 285 people were diagnosed with HIV in Scotland. This contrasts with 6095 people diagnosed in the whole of the UK in 2015, the last year for which we have complete figures, meaning that roughly 5% of UK HIV diagnoses are in Scotland compared with roughly 10% of the population.

In gay men, there was a marked fall in infections in men who appeared to have acquired HIV within Scotland (from 107 to 67), but an increase in infections acquired outside the UK (from 29 to 38).

Health Protection Scotland estimates that 5277 people diagnosed with HIV are currently living in Scotland. Of these 89% are in regular care and 84.5% on antiretroviral therapy.

The policy organisation HIV Scotland said the apparent drop in sexually transmitted HIV was encouraging but would need to be confirmed. “Some possible reasons could include changes in test rates, increase in people living with HIV reaching levels of viral undetectability (meaning they are unlikely to be able to pass on the virus thanks to the effects of the treatment they are on), or the increased use of pre-exposure prophylaxis (PrEP).”

David Goldberg of Health Protection Scotland told The Herald that his team was looking into whether the fall is real and its possible causes. “From an MSM perspective, it is possible that the decline in reports among those acquiring their infection within Scotland represents a real reduction in HIV transmission among this population,” he said. He suggested that the decline in diagnoses among people born in high-prevalence countries may be due to changes in rates of migration. Fewer diagnoses in both populations could be due to a reduction in the uptake of HIV testing.