'Sugar daddies' campaigns may be missing the mark
Keith Alcorn 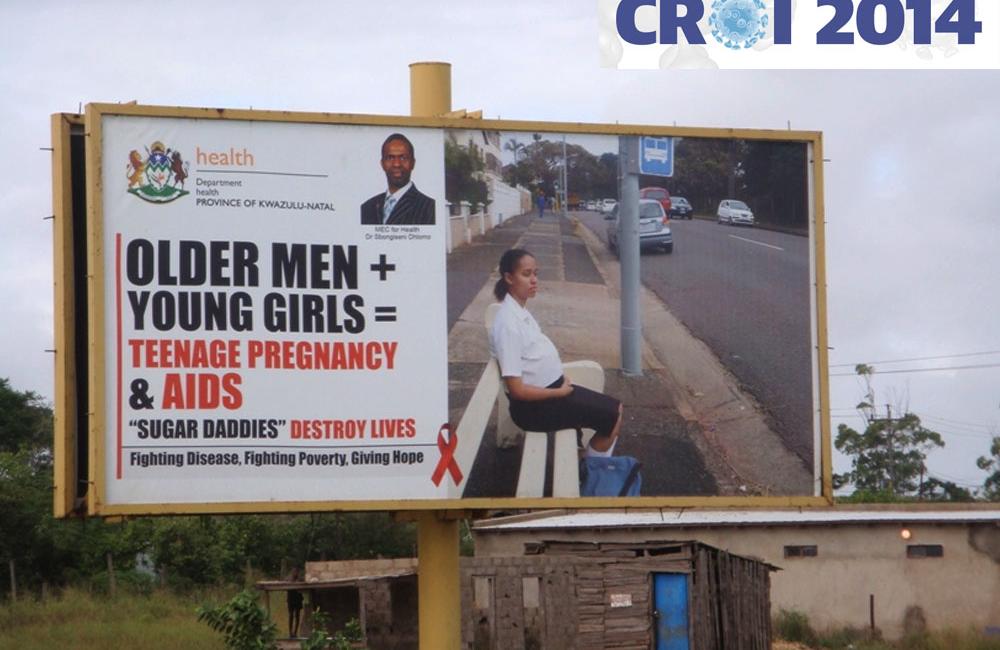 Billboard, detail from slides by Guy Harling presented at CROI 2014.
This article is more than 7 years old. Click here for more recent articles on this topic

Sex with older men is not placing women under 30 at higher risk of HIV infection in rural South Africa, and relationships with older men may even be protecting women over 30 from infection, according to results from a eight-year study presented on Thursday at the 21st Conference on Retroviruses and Opportunistic Infections (CROI) in Boston.

Although cross-sectional studies of HIV prevalence have suggested that younger women are placed at high risk of HIV infection as a result of relationships with older men in sub-Saharan Africa, this is the first study to follow women over a long period and to look at HIV incidence and age of sexual partners.

Guy Harling of the Africa Centre for Health and Population Studies said that campaigns in many African countries that seek to discourage or even stigmatise age-different relationships may prove to be an inefficient use of resources, or may even prove counter-productive. In KwaZulu-Natal province, for example, billboard campaigns proclaim: “Older men + young girls = teenage pregnancy & AIDS. Sugar daddies destroy lives.”

The study was conducted in the Hlabisa district of KwaZulu-Natal, a rural area in the north of the province with amongst the highest levels of HIV infection in the world. Sexually active women aged 15 to 49 were recruited and tested annually for HIV between 2005 and 2012, as well as questioned about the age of their most recent sexual partner at each annual study visit.

Harling suggested that the reduced risk in older women may be a consequence of extensive social networks that allow older women to make a careful choice of partner. It is also possible that younger women may have fewer opportunities to encounter an older partner with HIV infection than in an urban area.

Dean Street's Lead Clinician Dr Alan McOwan is urging men who have sex with men who have taken a break from PrEP over the latest coronavirus-induced lockdown to begin their PrEP again now, so they're covered by the time restrictions lift.
Attitude
30 Nov 20
Epidemiology & behaviour

We are concerned about the use of blood taken from people living with HIV during routine testing prior to starting or changing antiretroviral therapy in surveillance databases, without our permisssion, for public health purposes.
HIV Justice Network
22 Sep 20
More editors' picks