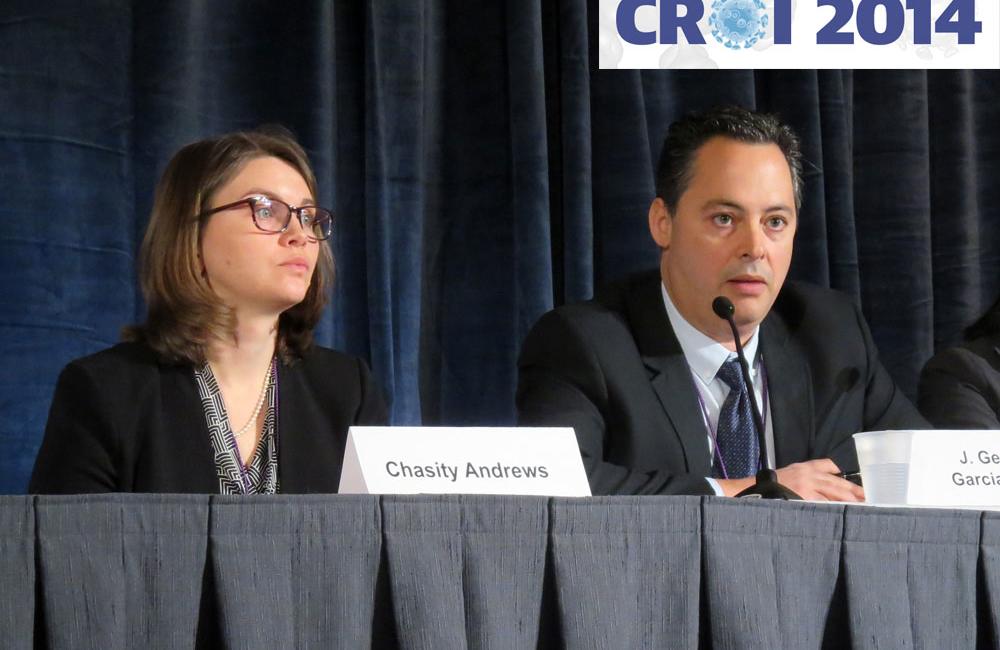 Chasity Andrews, from the Aaron Diamond Research Institute in New York, and Gerardo-Garcia-Lerma, from the Centers for Disease Control in Atlanta, presenting at CROI 2014. Photo by Liz Highleyman, hivandhepatitis.com.
This article is more than 9 years old. Click here for more recent articles on this topic

Two studies in monkeys of an injectable formulation of the third-generation integrase inhibitor drug GSK1265744 (GSK744LA, where LA stands for ‘long-acting’) have strengthened the evidence that it may work as pre-exposure prophylaxis (PrEP) in humans, and a phase II study in humans is starting soon.

One of the studies presented yesterday at the 21st Conference on Retroviruses and Opportunistic Infections (CROI) in Boston measured how long the protective effect of GSK744LA lasted after a single dose. In the other study, monkeys received three injections of the drug every four weeks while being ‘challenged’ with virus and were monitored for 30 weeks to see if they remained free of infection.

In the first study, Chasity Andrews and colleagues from the Aaron Diamond Research Institute in New York gave an injection of GSK744LA to eight monkeys, with another four not given the drug. All 12 monkeys were then given weekly challenge doses of SHIV, a virus that mimics the course of HIV infection in monkeys.

This study was a follow-on from a study presented at the previous CROI, which found that two doses of GSK744LA fully protected eight monkeys from SHIV infection over a two-month period, whereas another eight untreated monkeys all became infected.

In this study, the researchers investigated how long a single dose of GSK744LA would protect monkeys repeatedly challenged with SHIV.

No infection occurred when drug levels were above three times the IC90 of the drug (the IC90  is the level required to suppress HIV by 90%) though the monkey that became infected first did so with a plasma drug level just below the IC90.

Andrews said that a drug-level study in HIV-negative human volunteers presented at the 2013 International AIDS Society conference suggests that in humans given an equivalent dose, the level of GSK744 in the blood does not fall below the 3xIC90 levels until 12-16 weeks after injection, suggesting the drug could be given every three months.

In the second study, Gerardo Garcia-Lerma and colleagues from the Centers for Disease Control in Atlanta gave six monkeys three injections of GSK744LA, a month apart, while giving them frequent low-dose challenges of SHIV (22 in 12 weeks) to mimic sex more closely. No treated monkey became infected over the 12-week period of the study whereas all six untreated monkeys were infected within 11 weeks, and all but one within five weeks.

Plasma drug levels remained above the 3xIC­90­ level for about five weeks after the last injection.

The researchers in this study were more cautious about how often GSK744LA might be dosed, saying it might have to be given monthly. The reason for this is that drug levels seen in vaginal secretions were lower than in blood, at about 20% of blood levels (levels in rectal secretions were about 50% of those in blood).

The other researchers also observed this, so it is a matter of interpretation how often GSK744LA might need to be dosed. Chasity Andrews commented that drug levels usually fall faster in animals than humans, and Gerardo Garcia-Lerma noted that the protection offered may be systemic as well as local, i.e. not totally dependent on drug levels in the vagina or rectum.

The first human study to gauge efficacy, HPTN 077, is now planned to start this spring.

As the HIV prevention field is poised to introduce injectable cabotegravir (CAB), AVAC lays out a Plan for Accelerating Access and Introduction of Injectable CAB for PrEP. The plan identifies immediate priorities to support the swift rollout of CAB for PrEP and calls on stakeholders to ensure that it's delivered to programs at scale at the lowest price possible.
AVAC
13 Jun 22
More editors' picks