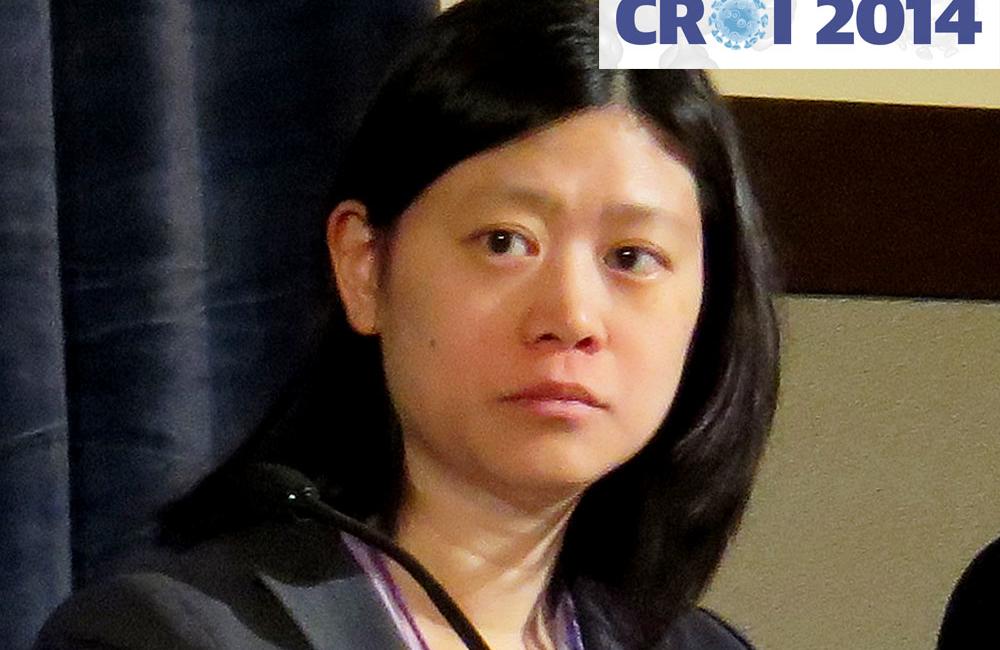 Beatrice Chen, of the University of Pittsburgh, presenting at CROI 2014. Photo by Liz Highleyman, hivandhepatitis.com.
This article is more than 9 years old. Click here for more recent articles on this topic

The area of biomedical prevention – using antiretroviral drugs or other medical rather than behavioural approaches to prevent HIV transmission – has produced some of the major gains in the HIV field in recent years. Studies have demonstrated the effectiveness of treatment as prevention and oral pre-exposure prophylaxis (PrEP), but researchers are also looking at other methods including long-acting injectables and microbicide gels and rings. Vaginal rings release drugs slowly over time, which could help with adherence.

The dapivirine-only ring is currently in phase 3 trials. The combination ring – being tested for the first time in a human trial – contains 25mg dapivirine plus 100mg maraviroc. All rings are made of a silicone elastomer measuring 56mm in diameter and 7.7mm thick.

This double-blind, randomised, placebo-controlled trial included 48 sexually abstinent HIV-negative women in Pittsburgh, Boston and Birmingham, Alabama. Half the women were white, about 40% were black and the average age was approximately 30 years.

The researchers measured dapivirine and maraviroc levels in blood plasma and vaginal fluid and collected information about adverse events. Adherence was assessed by self-report and residual drug levels in returned rings. After wearing the rings for 28 days, participants underwent cervical biopsies to collect tissue samples which were then exposed to HIV in the laboratory (known as an ex vivo challenge).

Almost all participants completed the study and more than 90% reported full adherence, which was confirmed by residual drug levels in used rings. Most women wore the ring continuously for 28 days, though nearly one in five said they would prefer not to do so during menstruation.

All the vaginal rings were generally safe and well-tolerated. Participants reported a total of 167 adverse events, most of which were mild (88%) or moderate (10%), and a majority of which (71%) were deemed unrelated to the study products. There were no significant differences in frequency of genitourinary side-effects or moderate or worse adverse events across the treatment and placebo arms.

Cervical tissue samples from women using dapivirine and combination rings showed a significant inverse linear relationship between HIV replication and tissue dapivirine levels – that is, higher levels were associated with reduced viral replication. There was no observed relationship with maraviroc levels, which in most cases were undetectable.

“Dapivirine but not maraviroc delivered by a vaginal ring for 28 days blocked HIV-1 infection in cervical tissue,” the researchers concluded. “There was a linear correlation between dapivirine levels in tissue and protective effect. These data suggest that delivery of NNRTIs via vaginal rings is a viable approach for HIV prevention.”

“It's encouraging that both drugs were safe, and that most women didn't mind wearing the ring,” Chen said in a press release issued by the Microbicide Trials Network, which ran the trial. “However, we found maraviroc wasn't getting absorbed in tissue like dapivirine was and it didn't work as well as dapivirine in our laboratory studies looking at activity against HIV.”

Zeda Rosenberg from the International Partnership for Microbicides said that the non-profit organisation is doing additional development work to try to increase the amount of maraviroc that gets into cervical tissue and is planning a second safety study for 2015.