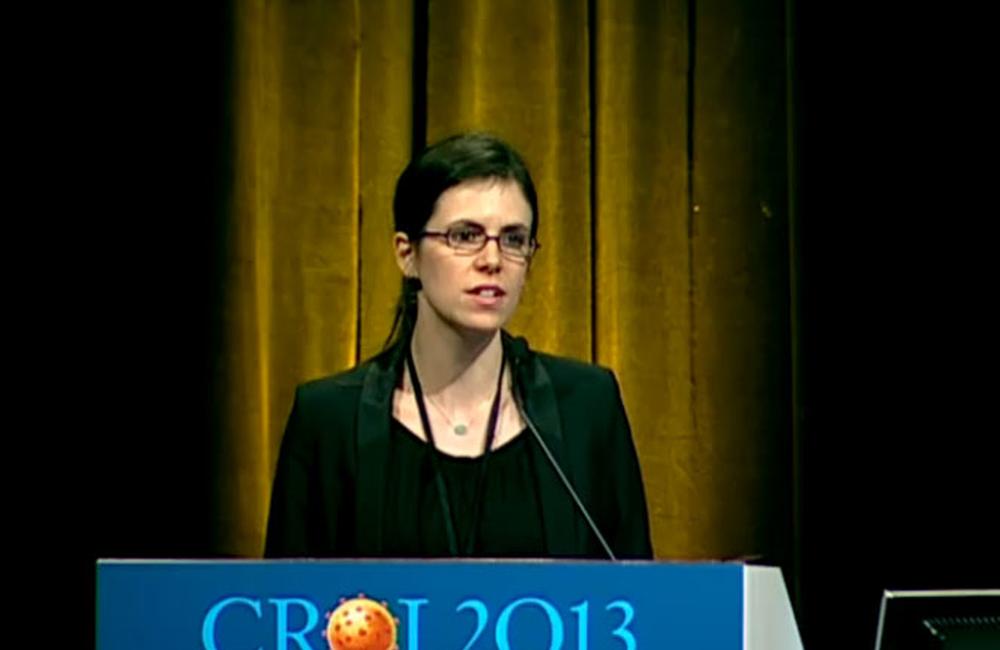 Jeanne Sibiude of Louis Mourier Hospital, France, presenting at CROI 2013.
This article is more than 10 years old. Click here for more recent articles on this topic

A large French study has found an elevated risk of some birth defects in children born to women exposed to some antiretroviral drugs during the first trimester of pregnancy, French researchers reported on 5 March at the 20th Conference on Retroviruses and Opportunistic Infections (CROI 2013) in Atlanta.

Almost all of the associations between specific drugs and types of birth defects were already known, and indeed, the study failed to detect any association between nelfinavir (Viracept) exposure and any elevated risk of birth defect, despite previous reports of an association. Nevertheless, the review of the French Paediatric Cohort is the largest study to date of the potential risks of birth defects attached to specific antiretroviral drugs.

Many birth defects are either genetically determined, or have multifactorial causes. In a small minority of cases they may be caused by exposure to chemicals, including medicines, during the first trimester of pregnancy. Due to the regulation of medicines, and the requirement for studies that examine the teratogenic effects of drugs before they are licensed, the risks associated with most drugs are well understood, and women can be warned against taking these drugs during pregnancy.

However, in the case of HIV infection, some drugs known to cause a small risk of birth defects are routinely prescribed because the benefits of their use – for both mother and child – outweighs the small risk. Efavirenz, for example, has been associated with neural tube defects in animal studies, and until 2010 its use during the first trimester of pregnancy was contraindicated for this reason. This recommendation was revised in 2011, following meta-analysis of large cohorts of women who had been exposed nevertheless to efavirenz during the first trimester. That study found no excess risk of neural tube defects compared to the general population. The World Health Organization concluded that the benefit of efavirenz-based antiretroviral treatment for pregnant women and women who might conceive while taking it far outweighed any risk of birth defects.

The study presented today looked at the incidence of birth defects diagnosed up to the age of two years in 13,214 children born to HIV-positive women enrolled in the French Perinatal Cohort between 1994 and 2010, who were exposed to antiretroviral drugs during gestation and born alive.

Birth defects were classified using two scales, developed by EUROCAT and MACDP. The overall prevalence was 4.4% on the EUROCAT scale and 7% on the MACDP scale (this includes minor defects), but no information was presented on the comparative levels of birth defects seen in the French infant population over the same period.

Three hundred and seventy two infants were exposed to efavirenz in the first trimester. The risk of neurological defects was approximately three times greater than for unexposed infants (adjusted odds ratio 3.15 [1.39-9.09]). This amounted to four defects: one pachygyria, one hydrocephaly, one cerebral cyst and one agenesis of the corpus callosum.

Among the 3267 infants exposed to zidovudine (AZT) during the first trimester, the risk of heart defect was approximately doubled (adjusted odds ratio 2.34 [1.39-3.94] when compared to unexposed infants. Most of these cases were ventricular septal defects (holes in the heart).

Neither drug was associated with an elevated risk of other types of birth defects.

Other defects were seen in association with exposure to the following drugs:

No other drugs were implicated.

This study did not report on the incidence of pre-term delivery and low birth weight, another risk associated with exposure to some antiretroviral drugs during pregnancy that has been reported in some – but not all – cohort studies.

Jeanne Sibiude, for the French Perinatal Cohort, concluded that recommendations to avoid efavirenz during the first trimester should be maintained in countries where other drug options exist, but other experts at the meeting emphasised that the risks needed to be balanced against the benefits to mother and child of antiretroviral therapy that contains efavirenz.