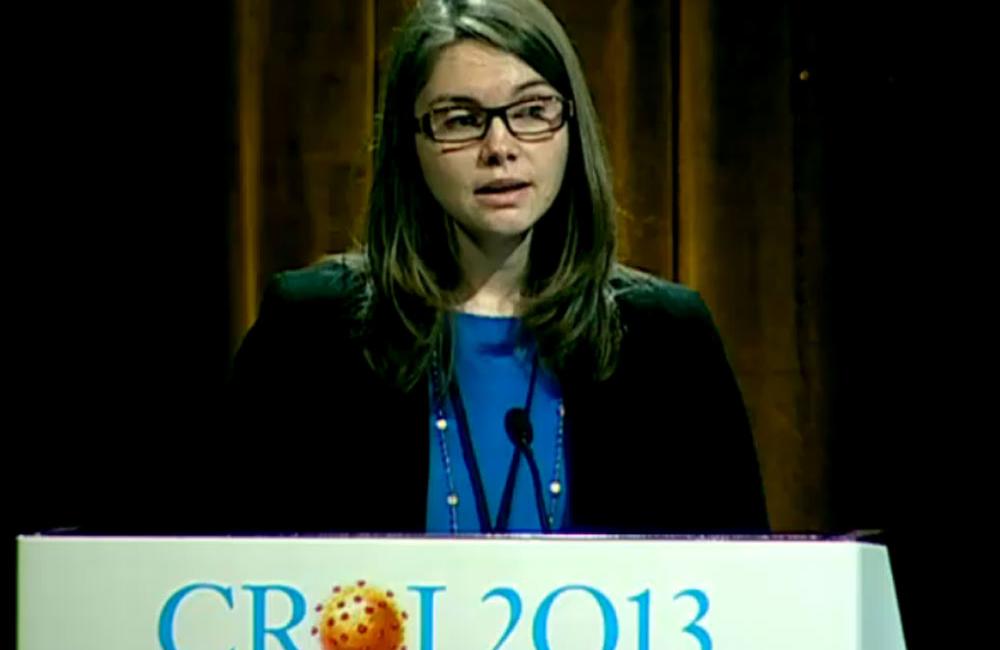 Chasity Andrews, of the Aaron Diamond AIDS Research Center, presenting at CROI 2013.
This article is more than 10 years old. Click here for more recent articles on this topic

An injectable, long-lasting integrase inhibitor drug, when given to rhesus macaques exposed to a monkey-adapted version of HIV, completely protected them against the virus. This drug, an injectable version of GSK1265744 (GSK744), has already been given as a single dose to HIV-negative human volunteers, and has a half-life of 21 to 50 days. Levels stayed above the IC90 (the level necessary to suppress 90% of HIV replication) for six months, and above four times this level for four months.

This means that if it proves safe and effective in humans, it could be given as an injection as little as four times a year, though individual variations seen in this study mean that monthly dosing may be safer.

None of the monkeys given GSK744 became infected or have shown any sign of virus in their blood.

GSK744 is similar to dolutegravir, which is already nearing approval as an anti-HIV drug in Europe and the US. It is effective against HIV, though, at lower concentrations in the body, which means manufacturers GlaxoSmithKline have been able to formulate it as a nanoparticle suspension – tiny 'packets' of the drug floating in fluid, which provide a long-lasting supply of the drug when injected.

Levels of GSK744 seen in these monkeys’ rectal tissues were equivalent to a level that would be expected to be protective in humans, and stayed above the four-times-IC90 level for the full eight weeks of viral challenge in six monkeys. In the other two monkeys, it fell below the four-times IC90 level at week seven, in other words, just before the last viral challenge .

Given that adherence is turning out to be a major barrier to the effectiveness of pre-exposure prophylaxis – see this report and this one on the VOICE trial – HIV drugs that can be given by injection at quarterly sexual health check-ups could, in the long term, be a more feasible way of offering biomedical protection against HIV. The researchers are studying the protected monkeys to see if there is any sign of virus in their systems and to determine the minimum effective dose.

In a separate monkey study, researchers from the US Centers for Disease Control protected female monkeys using another long-lasting PrEP method – a ring impregnated with tenofovir that could be inserted into the vagina. In this case, they used a polyurethane ring that was replaced every four weeks over a 16-week period.

Six monkeys exposed to SHIV were protected against infection, whereas eleven out of twelve not given the ring became infected. Unlike the injectable formulation, human research into vaginal rings is already well advanced, with the International Partnerships for Microbicides’ RING and ASPIRE phase III studies of an intravaginal ring impregnated with the NNRTI drug dapivirine well underway and rings containing the CCR5 inhibitor maraviroc  in phase I trials too.

In this case the researchers, for the first time, used the tenofovir prodrug that is actually used in the oral tenofovir pill – tenofovir disoproxil fumarate or TDF. In previous microbicides, they have used the biologically active tenofovir molecule, but this is not as well-absorbed and does not produce such high concentrations in tissues as TDF. However TDF is not as stable, and the team had to develop a new polyurethane ring rather than the silicone ring used in other vaginal-ring studies.

A webcast of the session in which this research was presented, HIV prevention: ARV, counseling, contraception, and condoms, is available on the conference website.