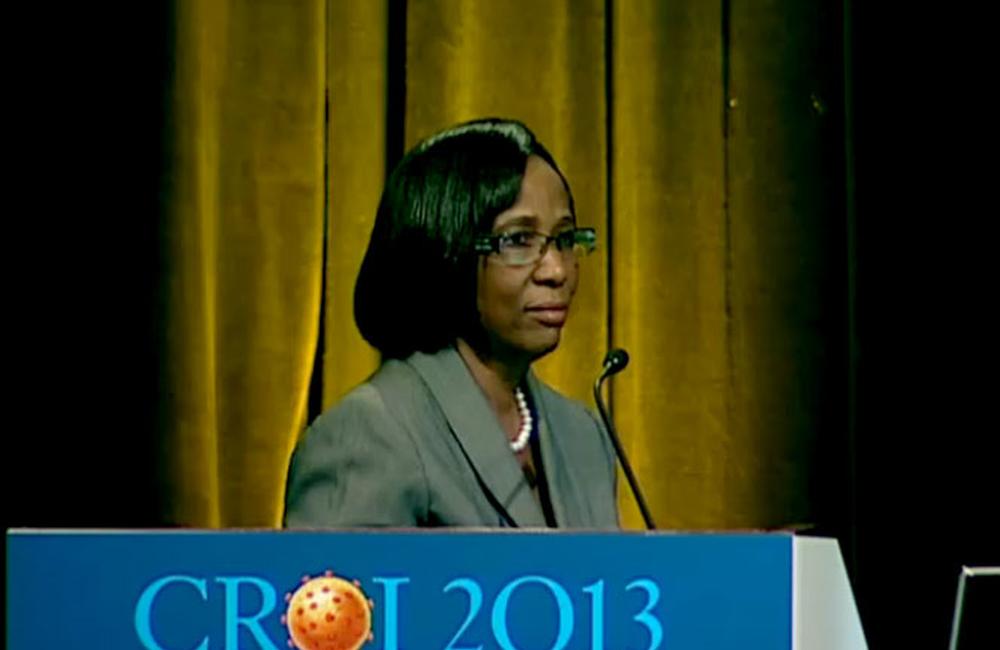 Adeodata Kekitiinwa presenting at CROI 2013.
This article is more than 10 years old. Click here for more recent articles on this topic

Children did just as well on antiretroviral therapy without routine laboratory monitoring of CD4 cell counts or drug side-effects as those who received regular monitoring during four years of follow-up, researchers from Uganda and Zimbabwe reported on 5 March at the 20th Conference on Retroviruses and Opportunistic Infections (CROI 2013) in Atlanta.

The researchers say that money spent on routine laboratory monitoring would be better spent on expanding access to treatment for children, since only 28% of children with HIV who needed treatment were receiving it in 2011, according to UNAIDS statistics.

The findings come from the ARROW study, which recruited over 1200 children with HIV in Uganda and Zimbabwe.

Laboratory monitoring of antiretroviral therapy in adults and children should ideally consist of regular checks on the CD4 cell count, viral load and blood and liver markers such as haemoglobin and liver enzymes, in order to monitor potential side-effects and signs of treatment failure.

In settings where laboratory facilities and resources are limited, laboratory monitoring may not include viral load or CD4 counts.

Laboratory monitoring strategies for adults were investigated in the DART study, which found that patients who received regular CD4 cell monitoring while taking antiretroviral drugs in sub-Saharan Africa had only slightly better outcomes after five years when compared to those who received clinical monitoring alone. CD4 cell counts or clinical symptoms were used to determine when first-line treatment was failing, leading to a switch to second-line treatment.

Researchers from Uganda, Zimbabwe and the United Kingdom found that the difference in outcomes only became apparent after the second year of treatment in the five-year study, leading them to conclude that clinical monitoring alone is feasible during the first two years of treatment, and that CD4 counts should be reserved for monitoring treatment beyond this point.

The UK’s Medical Research Council and the UK Department for International Development funded a second study, to examine whether laboratory monitoring is necessary in children, and whether starting treatment with a four-drug regimen before stepping down to three-drug treatment results in better long-term outcomes than three-drug treatment alone.

The study was conducted in Zimbabwe and Uganda, and recruited 1206 children ranging in age from 4 months to 17 years (median age 6 years) with fairly advanced HIV disease (median CD4 cell percentage 12%, 14% with WHO stage 4 HIV disease and 56% with stage 3 disease).

Participants were randomised to receive either:

Participants received abacavir/3TC plus an NNRTI, with factorial randomisations to once- or twice-daily abacavir/3TC and to either an induction/maintenance regimen of four drugs stepping down to three, or to a three-drug regimen. Neither of these randomisations had any impact on the overall study results, and there was no significant difference in outcome between any of these arms, so these will not be discussed further in this report. All participants received cotrimoxazole, and caregivers were also asked to consent to randomisation to stopping or continuing cotrimoxazole prophylaxis. Results of the cotrimoxazole sub-study will be described in a separate report.

The primary endpoints of the study were new WHO stage 4 events or death (clinical efficacy) and stage 3 or 4 adverse events (safety).

No significant difference in CD4 cell count gains was observed, and nor was there a significant difference in the proportion of children with a viral load suppressed below 400 copies/ml (78 vs 77%) or 80 copies/ml after four years on treatment. Critics of clinical monitoring argue that viral load testing is essential in order to ensure that high-level resistance does not develop due to protracted periods of viral replication. No data were presented on responses to second-line treatment because responses to second-line treatment were not an endpoint in this study.

There was no significant difference in grade 3 and 4 adverse events, and 70% of the grade 3 events were cases of asymptomatic neutropenia. Indeed, only 1.4% of all laboratory toxicity tests were carried out at the request of a doctor to assist in clinical management; the remainder (just over 125,000 tests) were carried out routinely.

The study also found that laboratory monitoring was not cost-effective, and in an accompanying policy briefing, the trial investigators urge that laboratory resources should be focused on carrying out tests that are clinically indicated, rather than routinely monitoring all patients. They suggested that CD4 counts should be used to check whether it is necessary to switch to second-line treatment in children who appear to be clinically failing.

The researchers concluded that their findings demonstrate that antiretroviral treatment for children is safe and highly effective in the absence of laboratory monitoring.

Full results of the study will be published in The Lancet on 7 March.