Continuing cotrimoxazole in children on ART reduces the risk of hospitalisation 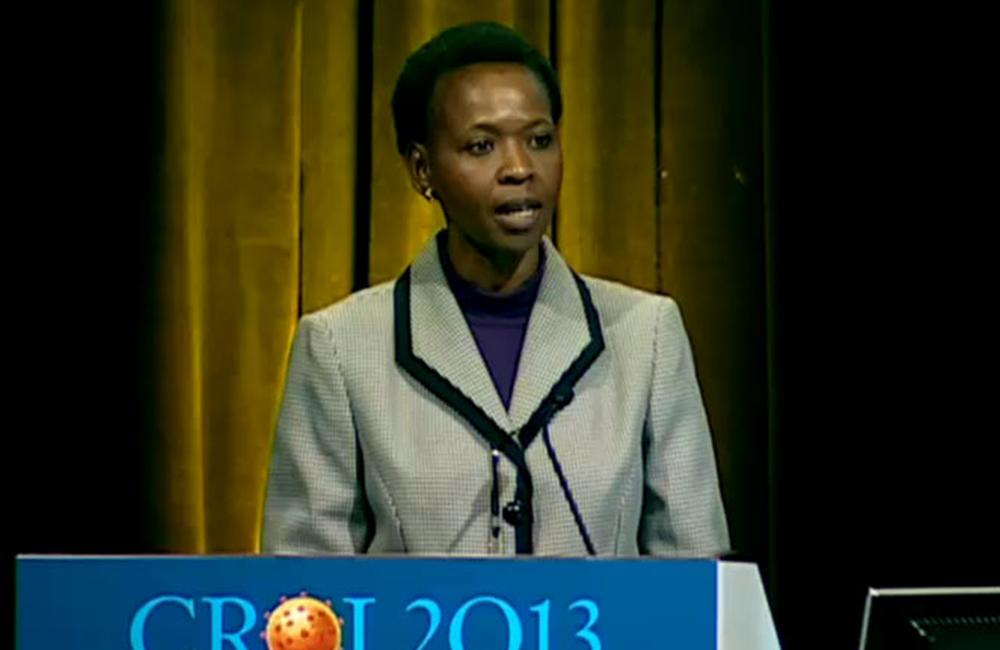 Mutsa Bwakura-Dangarembizi presenting at CROI 2013.
This article is more than 10 years old. Click here for more recent articles on this topic

Children on ART for more than two years who continued taking daily cotrimoxazole had significantly fewer hospitalisations for malaria as well as for non-malarial infections (notably pneumonia, sepsis and meningitis), compared to children who stopped this treatment, researchers from Uganda and Zimbabwe reported at the 20th Conference on Retroviruses and Opportunistic Infections (CROI 2013) in Atlanta this week.

The benefits of continued use of cotrimoxazole persisted across all age groups and CD4 counts.

The researchers advocate the continued use of cotrimoxazole long term in children and adolescents on ART in resource-poor countries, and recommend that current guidelines be revised accordingly. However, they caution, for this to happen health care systems and supply-chain logistics must be strengthened to avoid stock-outs.

This is a sub-study of the ARROW trial reported earlier this week, which showed that children did as well on antiretroviral therapy without routine laboratory monitoring of CD4 cell counts or drug side-effects as those who received regular monitoring over four years of follow-up. The trial recruited over 1200 symptomatic HIV-infected infants and children in Uganda and Zimbabwe.

Cotrimoxazole is a cheap, widely available antibiotic, easy to use with no adverse side-effects. It is commonly used in low- and middle-income countries for a wide range of fungal and bacterial infections. Cotrimoxazole prophylaxis is known to reduce death and disease – including malaria, pneumonia and diarrhoea – in HIV-positive adults and children before they start ART.

The adult DART study showed the benefits of continuation of cotrimoxazole for the first 18 months on ART. Other adult studies are ongoing.

While current World Health Organization (WHO) guidelines on cotrimoxazole prophylaxis recommend cotrimoxazole continuation, they also state that: “Children over 5 years of age with good adherence after more than six months on ART, full clinical recovery and CD4 counts over 350 cells/mm3, may discontinue cotrimoxazole.”

The researchers chose to look at whether stopping daily cotrimoxazole in children over three years of age, and on ART for at least 96 weeks, had a similar outcome determined by hospitalisation or death as those continuing daily cotrimoxazole. Co-primary endpoints were hospitalisation or death (efficacy) and any grade 3 or 4 adverse events (AEs; safety).

A total of 758 children from the ARROW trial with a median of 2.1 years on ART (interquartile range IQR1.8-2.2) were randomised to stop (382) or continue (376) daily cotrimoxazole. Eligibility included being over three years of age, on ART for more than 96 weeks, currently on daily cotrimoxazole, using an insecticide-treated bed net if living within a malaria-endemic area and having no previous pneumocystis jirovecii pneumonia (PCP) episodes.

Of note, over 1000 children were eligible and approached for consent. However, caregivers of 25% of these children declined because they had faith in cotrimoxazole, having used it for their children before ART became available.

The improvement  in immune status was substantial when compared to the time of enrolment in the trial. Median follow-up was 2.1 years; nine children withdrew or were lost. Adherence to the strategy was very high in both groups.

Among children who stopped cotrimoxazole there was a 60% increase in hospitalisation or death, hazard ratio HR: 1.57, 95%CI: 1.09-2.26, p=0.007. Age, sex, clinically indicated compared to routine CD4 test monitoring, and facility attended made no difference to the outcomes.

While there was some variation in cotrimoxazole effect by CD4 count, the benefits of continuing cotrimoxazole were greatest in those with CD4 percentage was equal to or above 30%, HR: 2.15, 95% CI: 1.30-3.54; 19% who stopped compared to 10% who continued were hospitalised.

The primary endpoint was driven by hospitalisation. Among those who stopped cotrimoxazole, the increased number of hospitalisations for both malaria (49 compared to 20) and non-malarial infections (53 compared to 25; notably pneumonia, sepsis and meningitis) was quite considerable.

While there were no substantive differences over time in changes in CD4 count, weight and height, there was a tendency to a higher weight in those who continued.

The researchers concluded, from this first randomised clinical trial in children with a background of bacterial and protozoan infections, that continuing cotrimoxazole after more than two years on ART is beneficial for HIV-infected children in Africa.

Following the presentation, a participant in the audience representing WHO confirmed that the cotrimoxazole prophylaxis guidelines would be revised this year.

Cytomegalovirus viremia is associated with an increased risk of mortality at 18 weeks among patients with HIV-associated cryptococcal or tuberculous meningitis, according to study findings published in the International Journal of Infectious Diseases.
Infectious Disease Advisor
11 Aug 22
Monkeypox