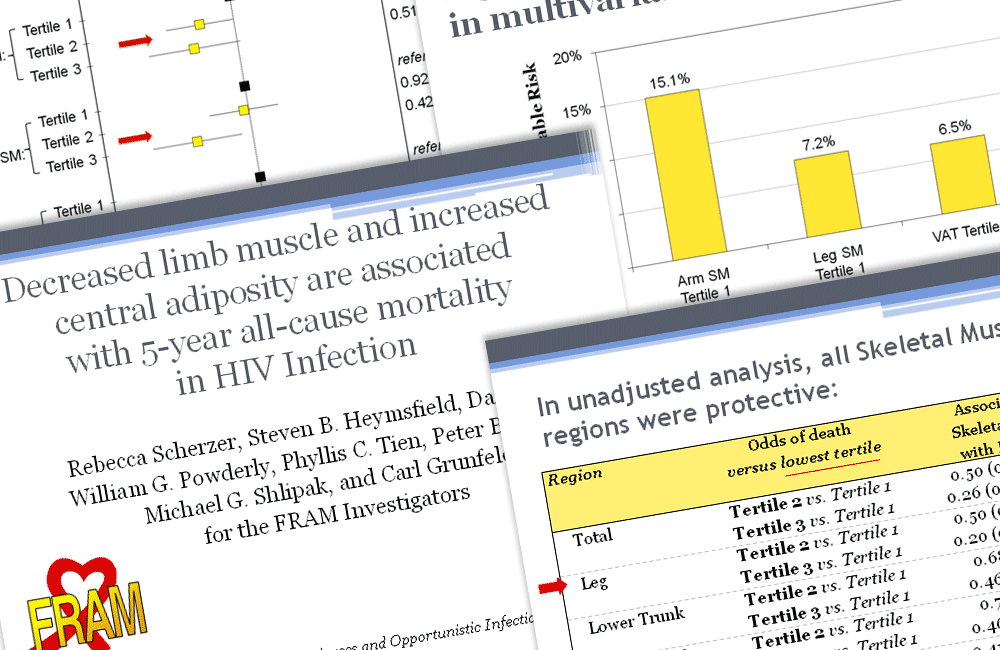 Slides from presentation by Rebecca Scherzer.
This article is more than 11 years old. Click here for more recent articles on this topic

HIV-positive people who lose muscle mass in their arms and legs whilst gaining abdominal fat have a higher likelihood of death, according to findings from the FRAM study presented on Tuesday at the 18th Conference on Retroviruses and Opportunistic Infections (CROI), taking place this week in Boston. But the common measure of body mass index (BMI) may fail to capture this increased risk.

Unintended weight loss and loss of lean muscle due to disease or ageing are known risk factors for mortality. While many studies have looked at body fat changes in people with HIV, less is known about changes in muscle mass.

Rebecca Scherzer from the University of California at San Francisco and colleagues looked at muscle loss, subcutaneous fat loss, and central or abdominal fat gain (reflecting visceral fat around the internal organs) as predictors of death among people with HIV.

A non-invasive, non-x-ray diagnostic technique that provides computer-generated images of the body's internal tissues and organs.

The researchers performed whole-body magnetic resonance imaging (MRI) on nearly 1200 HIV-positive participants in the FRAM (Fat Redistribution and Metabolic Change in HIV Infection) study. About two-thirds were men and the average age was just over 40 years. The mean BMI was about 25, the threshold for classification as "overweight".

Looking at all-cause mortality over five years, the investigators found that decreased muscle tissue in the arms and legs, as well as increased belly fat, were strong and consistent predictors of mortality, even after controlling for other risk factors.

After adjusting for demographic factors, cardiovascular risk factors, HIV-related factors including CD4 cell count and viral load, kidney disease, and inflammation markers, people with the lowest arm or leg muscle mass had approximately twice the risk of death, as did those with the most visceral fat.

Contrary to expectations, however, peripheral lipoatrophy, or loss of fat in the arms and legs, was not associated with higher mortality.

Relying on BMI may underestimate this risk, Scherzer said. BMI, calculated as body weight divided by height squared, is often used as a surrogate measure for body fat. But people who have both excess abdominal fat and reduced limb muscle mass can have a BMI within the normal range.

"BMI is a flawed measure," Scherzer explained at a press conference following the presentation, as it can classify people with a lot of muscle as obese. Instead, she recommended, clinicians should measure waist circumference as a simple indicator of visceral fat, along with mid-arm muscle mass, which can be estimated using mid-arm circumference and triceps skin-fold thickness.

Responding to a question after her presentation, Scherzer said studies of the HIV-negative population find that muscle strength is more important than muscle mass. This offers hope, she said, because it suggests that exercise can lead to improved outcomes.

You can also watch a webcast of the presentations made at this conference session, including the speaker Rebecca Scherzer.

I’ve just spent eight days in hospital undergoing open-heart surgery. It’s been a life-changing experience, a series of revelations that showed both my strengths and my vulnerabilities. It also influenced how I view my own HIV and that of others and where I go next.
POZ
5 Aug 21
Ageing & HIV

"We must debunk beliefs among healthcare professionals that older adults are not sexually active or use drugs, and misconceptions among older adults that they are not at risk of HIV", says Dr Garcia Carus.
EurekAlert
8 Jul 21
More editors' picks