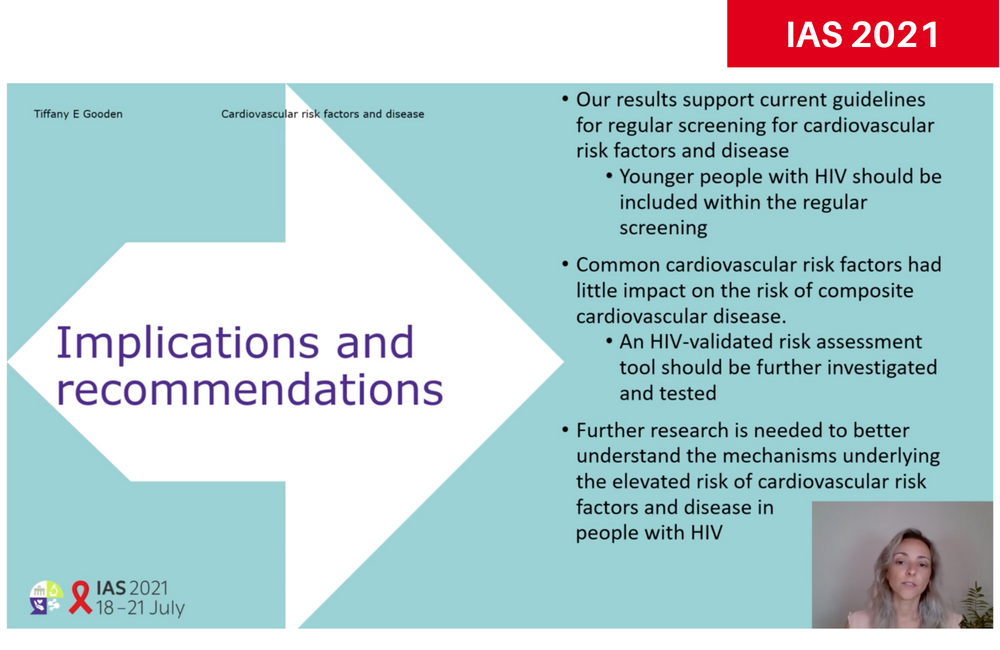 People living with HIV have more cardiovascular risk factors and are at heightened risk of cardiovascular disease, the 11th International AIDS Society Conference on HIV Science (IAS 2021) heard this week. People with HIV under the age of 40 had an increased risk compared to HIV-negative people of the same age.

These results may sound unsurprising, as increased risk of cardiovascular disease and associated risk factors in people living with HIV have been reported by prior studies. However, many of these studies come from the US where health behaviours and healthcare access differ from other high-income countries. Some studies had important limitations such as not being based on the general population, being unable to control for key confounders and not comparing people living with HIV to people without HIV. Moreover, most were conducted over a decade ago. Since then, cardiovascular risk management and the safety of HIV medications have improved.

Therefore, Tiffany Gooden and her colleagues from the University of Birmingham aimed to identify, as primary outcome, the risk of composite cardiovascular disease in people with HIV living in the UK. First events for stroke, myocardial infarction, peripheral vascular disease, ischaemic heart disease and heart failure were included.

Secondary outcomes were each of the individual conditions and all-cause mortality. The following risk factors for cardiovascular disease were also included as secondary outcomes: hypertension, type 2 diabetes, chronic kidney disease, use of lipid-lowering drugs (as a proxy for dyslipidaemia) and atrial fibrillation (an irregular and rapid heart rate that can increase cardiovascular risks).

To form the population sample they needed, the investigators used The Health Improvement Network (THIN), a nationally representative UK anonymised database of electronic records from general practices. The study period was 2000-2020.

All patients with a recorded HIV diagnosis aged at least 18 years were included. Up to four HIV-negative individuals were matched with each HIV-positive individual, based on age, sex and general practice.

The study revealed that people living with HIV had a 54% increased risk for composite cardiovascular disease (hazard ratio 1.54, 95% confidence interval 1.30, 1.83). With respect to individual conditions, people with HIV also had a 49% higher risk of stroke (HR 1.49, 95% CI 1.11, 2.00) and 59% increased risk of ischaemic heart disease (HR 1.59, 95% CI 1.25, 2.02). The analysis did not identify an increased risk for peripheral vascular disease, heart failure or myocardial infarction as individual outcomes, but this could be due to a lack of statistical power.

People with HIV were found to also have higher rates of all risk factors investigated, aside from atrial fibrillation – this is a key risk factor for stroke which, interestingly, did occur at an increased rate in people with HIV. However, the investigated risk factors – including hypertension, type 2 diabetes and chronic kidney disease – had little impact on the risk of composite cardiovascular disease.

All-cause mortality was increased by over 50% for people living with HIV.

Gooden and colleagues also conducted a sub-group analysis, looking at the risk of composite cardiovascular disease in subgroups – such as age, gender and smoking status – comparing people living with HIV with their HIV-negative counterparts. This demonstrated a higher risk of cardiovascular disease in people living with HIV, irrespective of key demographics. The risk has remained unchanged over the last two decades. Those younger than 40 had the highest risk, although the difference was not statistically significant from those aged 40 and above.

These results are alarming, particularly given the study’s strengths – a 20-year study period, a population-based and matched cohort, and the ability to report on composite cardiovascular disease. Limitations include a lack of data on CD4 count and antiretrovirals used.

Concluding her talk, Gooden highlighted the need to include regular screening for cardiovascular risk factors and disease among younger people living with HIV, and to establish a risk assessment tool that is validated in people with HIV. She also called for further research into the mechanisms underlying the elevated risk of cardiovascular risk factors and disease in people living with HIV.