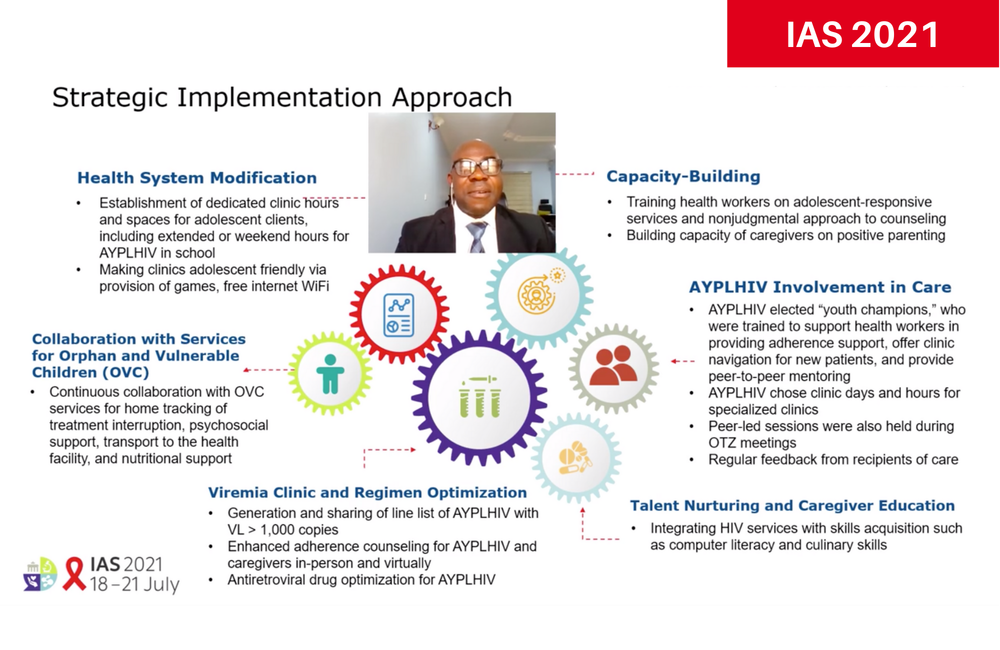 Slide from Dr Franklin Emerenini's presentation on the Nigerian study at IAS 2021.

Successful approaches to managing HIV in adolescents and young adults were reported by researchers from two sub-Saharan African countries at the 11th International AIDS Society Conference on HIV Science this week.

In 2018, viral load suppression among people living with HIV in four high-burden HIV regions of northern Namibia (including Kavongo, Omusati and Oshikoto) was at 92% overall. However, only 44% of adolescents and young adults (aged 15 to 24) were virally suppressed in these regions.

Shikesho shared the results from a quality improvement collaborative intervention including 25 treatment facilities (providing care to 66,400 people living with HIV) in the three aforementioned regions to improve viral suppression among adolescents and young adults between August 2018 and December 2020.

The intervention consisted of a dedicated team of three professionals (an antiretroviral therapy (ART) nurse, data clerk and medical officer) in each facility, who introduced new approaches and monitored viral suppression rates by submitting data to a central source. This team attended four learning sessions and received support from regional and national quality improvement coaches.

Strategies included the use of high viral load registers (to monitor those who had not achieved viral suppression, implemented at all sites), enhanced adherence counselling (80% of sites), directly observed therapy (52%), pill boxes (32%), initiating or strengthening existing teen adherence clubs (64%), and ensuring timely switching to a different ART regimen if required (all sites). Facility-based teams reported on specific strategies that were successfully implemented to encourage higher rates of viral suppression (less than 1000 copies/ml).

“A quality improvement collaborative approach applied with a dedicated team of healthcare workers and coaches led to improvements in viral load suppression in the 15 to 24 age group,” Shikesho concluded. “Facility-level teamwork and quality improvement learning sessions were critical to the success of the initiative.”

Adolescents and young adults account for about 7% of people living with HIV in Nigeria, and often have poor treatment outcomes.

Strategies used to achieve these goals included adolescent-focused case management, peer support, specific behavioural interventions aimed at targeting adherence issues and the inclusion of rewards that appeal to these age groups, such as free Wi-Fi and games.

A total of 33 health facilities across the four states participated in the intervention. At these sites, 4617 adolescents and young adults were enrolled in the programme (80% of all those eligible), with 66 of these trained as ‘youth champions’ – trained to support health workers in providing adherence support, to assist new patients in navigating the clinic and to provide peer mentoring.

"Adolescents and young people can easily get ‘missed in the crowd’ and require tailored, specific interventions to facilitate adherence.”

The number of those who received viral load testing increased by 50 percentage points, reaching 78% of adolescents and young adults.

In addition to involving adolescents and youth more directly, Emerenini attributed the success of the intervention to strategies similar to those used in Namibia, such as keeping a list of those who had not achieved viral suppression, enhanced adherence counselling (both for caregivers and youth, in-person and virtually) and ensuring that optimal ART regimens were used. Additionally, he mentioned specific health system modifications, such as the establishment of dedicated clinic hours (such as over the weekend) and making clinics more adolescent-friendly by providing free Wi-Fi and games. Additionally, health workers were trained on how best to be responsive to the needs of adolescents in a non-judgemental manner.