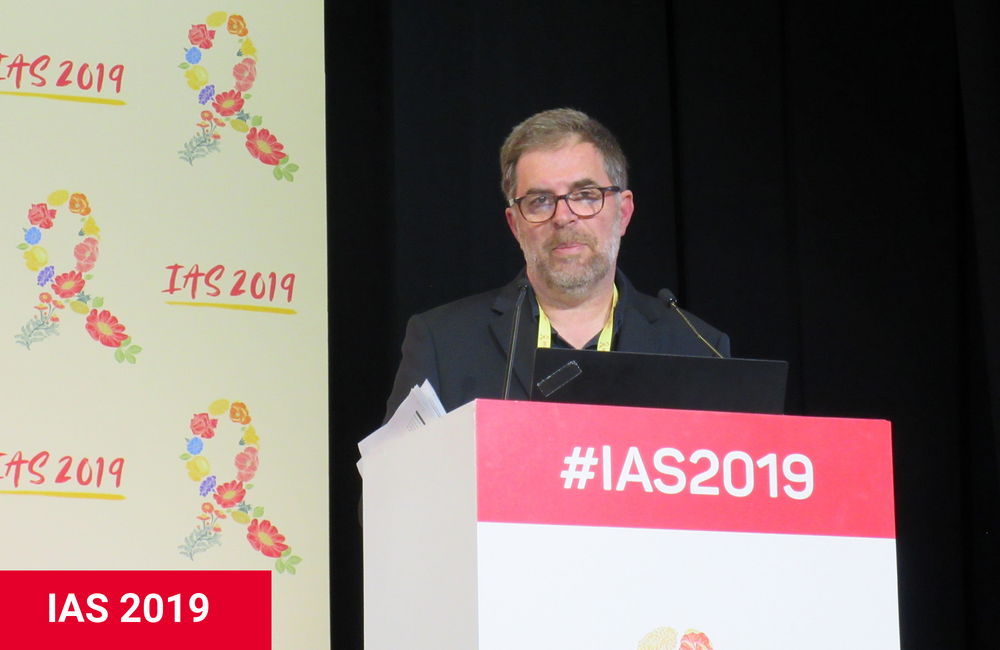 Taking anti-HIV medication four days a week was as effective as daily treatment for people who already had a fully suppressed viral load, early data from a randomised trial presented at the 10th International AIDS Society Conference on HIV Science (IAS 2019) in Mexico City suggest.

The efficacy of the approach, particularly in relation to resistance, will need to be confirmed with longer follow-up than the 48-week data presented at the conference.

The study did not use a single regimen. Instead, the study randomised people with fully suppressed viral load taking a variety of antiretroviral regimens to continue taking their medication seven days a week or to change to taking medication on four consecutive days. Not only did the study find no difference between these strategies, but no difference in the virological safety of the two strategies was found between regimens based on protease inhibitors (PIs), integrase inhibitors or non-nucleoside reverse transcriptase inhibitors (NNRTIs).

Although long-term adherence to antiretroviral therapy is good, as demonstrated by high rates of virological suppression in people on treatment, a substantial minority of people report ongoing problems with adherence or periods of adherence difficulty. Many people with HIV say that it is tough to maintain perfect adherence year after year and have expressed interest in treatment strategies that would reduce the burden of taking medication.

People living with HIV are recommended to take antiretroviral medications every day as prescribed, but there is evidence from therapeutic drug monitoring that sufficient blood levels of some antiretrovirals persist for several days after dosing, keeping HIV under control even when a single dose is missed. Several studies have shown that skipping doses for two days does not affect long-term viral suppression.

A previous 48-week unrandomised pilot study in 100 people found that 96% of people were able to maintain an undetectable viral load throughout the follow-up period after changing to four-day-a-week treatment.

To test this strategy further, the French national HIV research agency ANRS designed the QUATUOR study, which recruited 647 people who had had a fully suppressed viral load for at least 12 months and had no resistance mutations and randomised them to continue taking their existing regimen seven days a week or to change to taking their regimen four days a week.

In the four-day-a-week arm, participants took medication each day from Monday to Thursday.

The primary outcome of the study was the proportion of participants with therapeutic success at week 48, defined as undetectable viral load and no interruption of the assigned treatment strategy.

In each study arm, 318 participants started treatment and were included in the intent-to-treat analysis, which showed 95.6% in the four-day arm and 97.2% in the continuous-treatment arm achieved the primary outcome. The difference was within the 5% non-inferiority margin set for this trial.

Virological failure occurred in 1.9% of the four-day group and 1.3% of the continuous-treatment group. There was no significant difference in the rate of failure according to the third agent (integrase inhibitor, NNRTI or PI) used.

Although the number of participants developing drug resistance was small (four out of ten cases of virological failure) three out of four developed two-class resistance to drugs in the NRTI backbone and to either rilpivirine (two cases) or raltegravir (one case). Concerns about the long-term safety of the strategy centre on these cases of two-class resistance and the possibility of more emerging over time.

There was no difference in the frequency of viral blips above 50 copies/ml during the study between the two arms.

Nine people chose to leave the study. One participant discontinued treatment due to depression and two participants died of non-HIV-related causes.

There was no difference in the rate of adverse events between the study arms, but kidney function measured by eGFR showed a borderline significant trend towards improvement in the four-day arm at week 48.

Asked how the study investigators could be sure that participants followed the assigned treatment strategy in the study, lead investigator Dr Roland Landman said that pill counts had been carried out, but there will be further analysis of pharmacokinetic data.

Landman said that the four-day strategy reduced the cost of treatment by 43%.

Participants will be followed-up for a further 48 weeks to confirm the durability of the strategy.