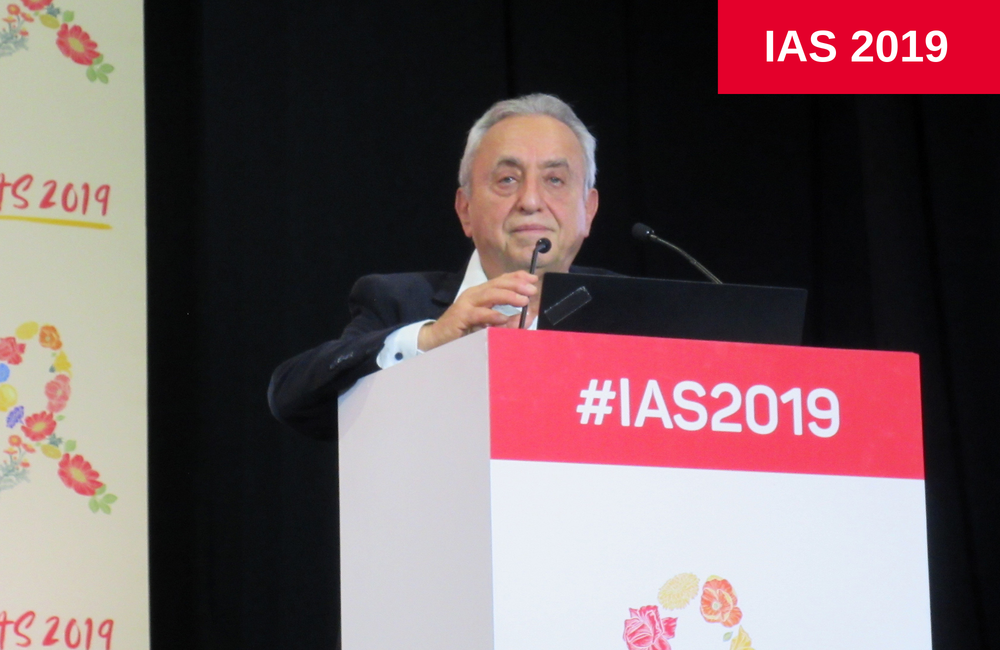 A two-drug combination of dolutegravir and lamivudine – the drugs in the Dovato co-formulation – continued to suppress viral load as well as a standard three-drug regimen in people starting their initial HIV treatment. The combination also maintained viral suppression in those who switched from a standard regimen.

These findings from the GEMINI and TANGO studies were reported in two late-breaking presentations at the 10th International AIDS Society Conference on HIV Science (IAS 2019) last week in Mexico City.

ViiV Healthcare's dolutegravir is a potent integrase inhibitor with a high barrier to resistance. Lamivudine is a well-tolerated and inexpensive nucleoside reverse transcriptase inhibitor (NRTI) widely available in generic versions. In April, the Dovato co-formulation was approved in the US and received a positive opinion from the European Medicines Agency.

Dolutegravir plus lamivudine for initial therapy

Dr Pedro Cahn of Fundación Huésped in Buenos Aires presented the latest findings from the ongoing GEMINI 1 and 2 studies, identical phase 3 trials that together enrolled 1433 people in Europe, the Americas, Asia, Australia, Russia and South Africa who were starting HIV treatment for the first time.

About 85% were men, two-thirds were white and the median age was approximately 32 years. At baseline, 80% had a viral load of 100,000 copies/ml or less, while 20% had a high viral load between 100,000 and 500,000 copies/ml (the upper limit allowed in the study). Over 90% had a CD4 count above 200 cells/mm3. They could not have major reverse transcriptase or protease resistance mutations. People with hepatitis B and those requiring hepatitis C treatment were excluded.

Participants were randomly assigned to receive dolutegravir plus lamivudine or dolutegravir plus tenofovir disoproxil fumarate (TDF)/emtricitabine (the drugs in Truvada). Follow-up is scheduled to continue for 144 weeks, or nearly three years.

At the 2018 International AIDS Conference last summer, Cahn presented the primary 48-week results from a pooled analysis of the two studies. At that point, 91.5% of people taking dolutegravir/lamivudine and 93.3% of those taking dolutegravir/TDF/emtricitabine had undetectable viral load (HIV RNA < 50 copies/ml), showing that the dual regimen was non-inferior to triple therapy. In each treatment arm, 1% or less had confirmed virological failure. Response rates were similar for people who started with low or high viral load at baseline.

In Mexico City, Cahn presented follow-up results at 96 weeks. At this point, 86.0% in the dolutegravir/lamivudine group and 89.5% in the dolutegravir/TDF/emtricitabine group had continued viral suppression in an intent-to-treat snapshot analysis. In a separate analysis that considered treatment-related drug discontinuation as failure, but not discontinuation for other reasons, response rates were higher, at 96.6% and 96.4%, respectively. There were 11 cases of confirmed virologic withdrawal in the dual therapy group and seven in the triple therapy group, none of whom developed treatment-emergent resistance.

TDF can lead to impaired kidney function and bone loss in susceptible individuals, such as older people and those with pre-existing conditions. In these studies, changes in kidney function and bone biomarkers favoured dolutegravir/lamivudine. Fewer people in the dual therapy group discontinued treatment due to kidney-related events (2 vs 7 individuals, respectively).

Changes in blood lipid levels favoured dolutegravir/TDF/emtricitabine, although the total to HDL cholesterol ratio improved in both groups. Fewer than 2% in either group reported weight gain as an adverse event, a growing concern with dolutegravir; the mean gains were 3.1kg and 2.1kg, respectively.

"These results confirm [dolutegravir plus lamivudine] is a compelling treatment option for people living with HIV," the researchers concluded.

Dolutegravir/lamivudine as a switch option

Dr Jean Van Wyk from ViiV presented results from the TANGO study, a phase 3 trial comparing the safety and efficacy of switching to the dolutegravir/lamivudine fixed-dose co-formulation versus staying on a three- or four-drug regimen containing tenofovir alafenamide (TAF), the newer version of tenofovir that is easier on the kidneys and bones.

TANGO included 741 participants in Europe, North America, Australia and Japan. More than 90% were men, most were white and the median age was about 40 years. At baseline the median CD4 count was approximately 700 cells/mm3. Here too, people with hepatitis B and those with hepatitis C requiring treatment were excluded.

At study entry the participants had undetectable viral load (<50 copies/ml) on their current regimen. Most (about 80%) were taking an integrase inhibitor, including about 66% on cobicistat-boosted elvitegravir (the Genvoya single-tablet regimen contains elvitegravir/cobicistat/TAF/emtricitabine). In addition, about 14% were using an NNRTI, usually rilpivirine (the Odefsy co-formulation contains rilpivirine/TAF/emtricitabine), and 8% were taking a protease inhibitor, usually boosted darunavir (the Symtuza co-formulation contains darunavir/cobicistat/TAF/emtricitabine). The median duration of antiretroviral therapy was about three years.

In order to be eligible, they had to have no history of treatment failure or evidence of resistance to the study drugs.

In the primary analysis at 48 weeks, 93.2% of people who switched to dolutegravir/lamivudine and 93.0% of those who stay on their current regimen achieved viral suppression, again meeting the criteria for non-inferiority. Zero participants in the switch group and two in the TAF-based regimen group experienced virologic treatment failure.

Again, both regimens were safe and well tolerated. Moderate to severe (grade 2-5) drug-related adverse events were uncommon in both groups, though more occurred in the dolutegravir/lamivudine arm (6% vs <1%). Thirteen people (4%) taking dolutegravir/lamivudine and two people (1%) taking a TAF-containing regimen withdrew from the study due to adverse events, including nine (2%) and 1 (<1%), respectively, with drug-related events.

Changes in kidney function biomarkers, bone biomarkers and lipid levels were generally small, with no clear pattern favouring either regimen. Few people in either group reported weight gain as an adverse event (1% on dolutegravir/lamivudine and 2% on a TAF-containing regimen).

"These data support the use of [dolutegravir/lamivudine] as a new robust switch option without increased risk of virologic failure or resistance and with reduced [antiretroviral therapy] exposure," the researchers concluded.