Increased risk does not appear related to atherosclerosis
Liz Highleyman 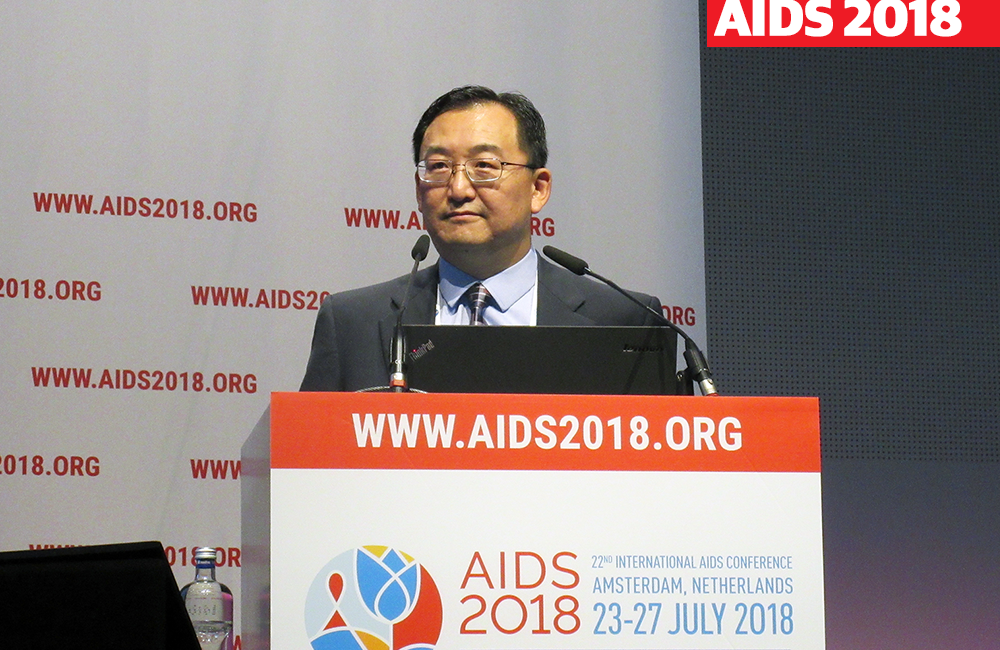 HIV infection is associated with a significantly increased risk of developing heart failure, but the reason is not yet clear, according to a presentation yesterday at the 22nd International AIDS Conference (AIDS 2018) in Amsterdam.

Heart failure among people living with HIV does not appear to be related to atherosclerotic pathways, or build-up of plaque in the arteries, according to Alan Go of Kaiser Permanente Northern California.

As HIV-positive people live longer thanks to effective antiretroviral treatment, they increasingly face non-HIV-related chronic conditions such as heart disease and cancer.

Occurs when the walls of the coronary arteries become narrowed by a gradual fatty build-up. Heart attack and angina are main symptoms.

Many studies have looked at cardiovascular disease among people with HIV, usually related to the development of atherosclerosis and coronary artery disease, which can block blood flow and lead to heart attacks and strokes. It is well known that HIV infection is associated with an excess risk of atherosclerotic cardiovascular events.

Go and colleagues instead focused on heart failure, or the inability of the heart muscle to adequately pump blood, which has not been extensively studied in this population.

The HEART study investigated heart failure and its possible contributing factors among HIV-positive participants in three Kaiser Permanente integrated healthcare delivery systems in Northern California, Southern California and the US mid-Atlantic states between 2000 and 2016.

Go's team identified all eligible HIV-positive adults without prior heart failure, matching them 10-to-1 with HIV-negative people of the same age, sex and race/ethnicity. The final study population included 38,868 people with HIV and 386,586 HIV-negative participants.

In both groups, nearly 90% were men, about 40% were white, 21% were black, 20% were Hispanic and 4% were Asian. About half in the HIV-positive group were men who have sex with men. The mean age was 41 years, with about 80% being in the 21-49 age group; only 5% were age 60 or older. About 14% were current or former smokers and 3% were classified as having alcohol abuse. People with HIV were about twice as likely to have a history of illicit drug use – relevant because drug injection can lead to myocarditis, or heart infection – but this only applied to 4.4% of the HIV-positive group in this study.

Looking at co-morbidities, coronary artery disease and related events such as myocardial infarction and stroke were rare in both groups (under 0.5%). Chronic liver disease, cancer, and diagnosed depression or dementia were more common among people with HIV. The HIV-negative group was about twice as likely to have the traditional cardiovascular risk factors of high blood pressure, elevated blood fats and diabetes.

At baseline, only 18% of HIV-positive people were on antiretroviral therapy (ART). Go explained that this was because the data collection was typically done when they were newly diagnosed before they started ART. CD4 count and viral load data were not available for many participants. A majority of those with available viral load measurements were not virally suppressed. About 30% had CD4 counts above 500 cells/mm3, 13% had fewer than 200 cells/mm3, and 43% had missing data.

In multivariate models controlling for demographic characteristics, HIV-positive people had a 54% greater risk of heart failure than HIV-negative individuals. This association grew stronger when medical history, medication use and other potential contributing factors were considered, reaching a 75% excess risk in one model.

"HIV infection is independently associated with a higher risk of developing heart failure," the researchers concluded. "Excess risk of heart failure does not appear mediated through atherosclerotic disease pathways or differential use of cardiopreventive medications."

Speaking from the audience, Paul Sax of Brigham and Women's Hospital in Boston took note of the small proportion of study participants taking ART and suggested doing a similar analysis to see if the same associations hold for people on treatment with suppressed viral load.

In the meantime, Go suggested, there "needs to be greater awareness of heart failure as an explanation of symptoms among people with HIV."

Initial data from a large NIH-supported clinical trial offer a detailed look at the health status of people aging with HIV around the world. With 7,770 participants enrolled in 12 countries across five continents, the Randomized Trial to Prevent Vascular Events in HIV (REPRIEVE(link is external)) is evaluating the ability of a statin medication, pitavastatin, to reduce the risk of heart disease among people with HIV. By leveraging data collected from this diverse group of study participants, researchers also are learning more about the long-term health effects of HIV.
National Institute of Allergy and Infectious Diseases
17 Aug 20
Ageing & HIV

The impact and prevalence of heart disease and other critical comorbidities on an aging global population with human immunodeficiency virus (HIV) have emerged from a suite of articles in The Journal of Infectious Diseases that contains the first swath of important data from the world's largest study of cardiovascular disease (CVD) prevention in people with HIV. This information from the ongoing National Institutes of Health (NIH)-funded study known as REPRIEVE (Randomized Trial to Prevent Vascular Events in HIV), in which Massachusetts General Hospital (MGH) is playing a key coordinating role, is giving the field of medicine an advance look at the disproportionate risk of comorbidities like CVD, chronic liver and kidney disease, physical function impairment and frailty, premature reproductive aging, cancer, and obesity in people with HIV from all regions of the world.
EurekAlert
13 Jul 20
More editors' picks