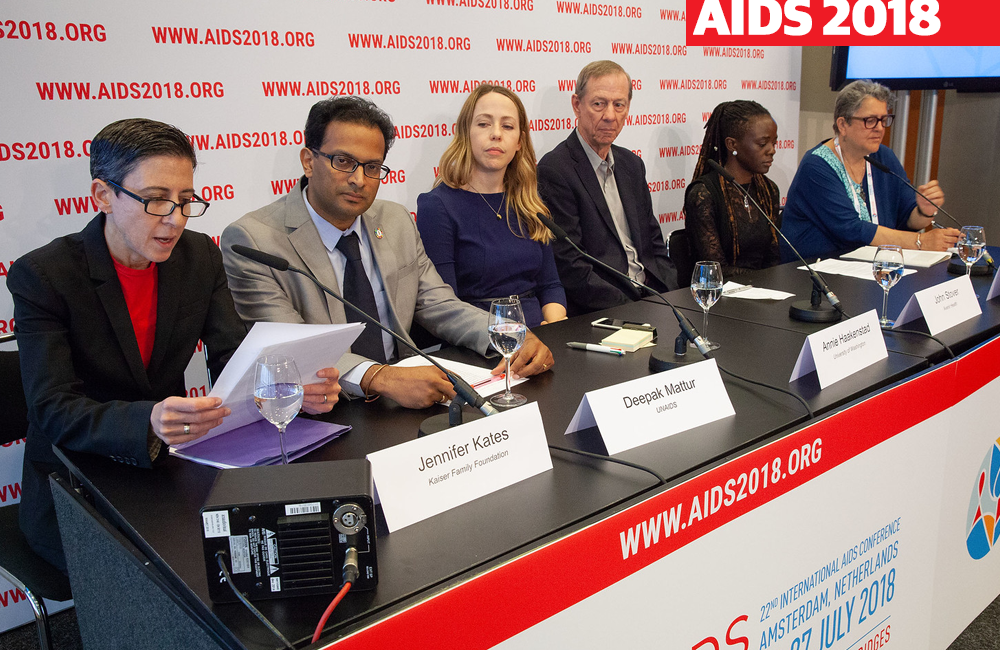 Falling levels of donor government funding for HIV programmes threaten progress towards the 2020 global target of 90-90-90, according to research presented on Wednesday at the 22nd International AIDS Conference (AIDS 2018).

At a press conference, Jennifer Kates of the Kaiser Family Foundation presented data from their recent joint report with UNAIDS alongside three further studies showing that overall funding by donor governments has largely stalled, with 8 out of 14 governments reducing their global spend on HIV efforts in 2017. A rise in overall funding from 2016-17 was due to changed timings in US spending and not expected to be replicated in future.

“We are in a different age of financing,” she concluded, “There is no significant new funding”.

Deepak Mattur of UNAIDS presented a paper analysing data from 112 low- and middle-income countries which found that, overall, domestic public spending on HIV in these countries increased by 60% from 2006 to 2016. While almost all regions increased their domestic HIV resources, the lowest increase (33%) was in Eastern Europe and Central Asia. The study concluded that sustained increases in domestic public spending will be critical for ending AIDS as a global public health threat by 2030.

“We are already almost 20% short of the funding needed to reach the 2020 targets,” he said.

John Stover of Avenir Health, however, presented a paper contending that more focused allocation of resources could improve cost-effectiveness by about a quarter in the 55 low- and middle-income countries that account for about 90% of all new infections, making cost efficiencies that would allow newer interventions to be funded.

The audience also heard from Maureen Milanga of Health Gap and Baroness Barker of the UK's All-Party Parliamentary Group on HIV. Maureen Milanga cited several examples of effective programmes which were unable to be provided at scale because of funding cuts, including the Dreams prevention programme for young women in Zinbabwe, which can only operate in 6 out of 59 districts.

Baroness Barker gave a donor perspective. Agreeing that the world was not on track for its 2020 HIV targets, she said that the biggest challenge was to persuade people that AIDS was not over. However, she also suggested that funding must be re-orientated to meet the changing epidemic, with major donors looking to develop more sustainable plans instead of funding what they always had.

With 70% of people with HIV living in middle-income countries by 2020, donor governments had a responsibility, she said, to remove barriers for key populations in these countries. She cited the UK Government's recognition of its colonial past and recent allocation of £5 million and practical support to change anti-LGBT laws in Commonwealth countries.