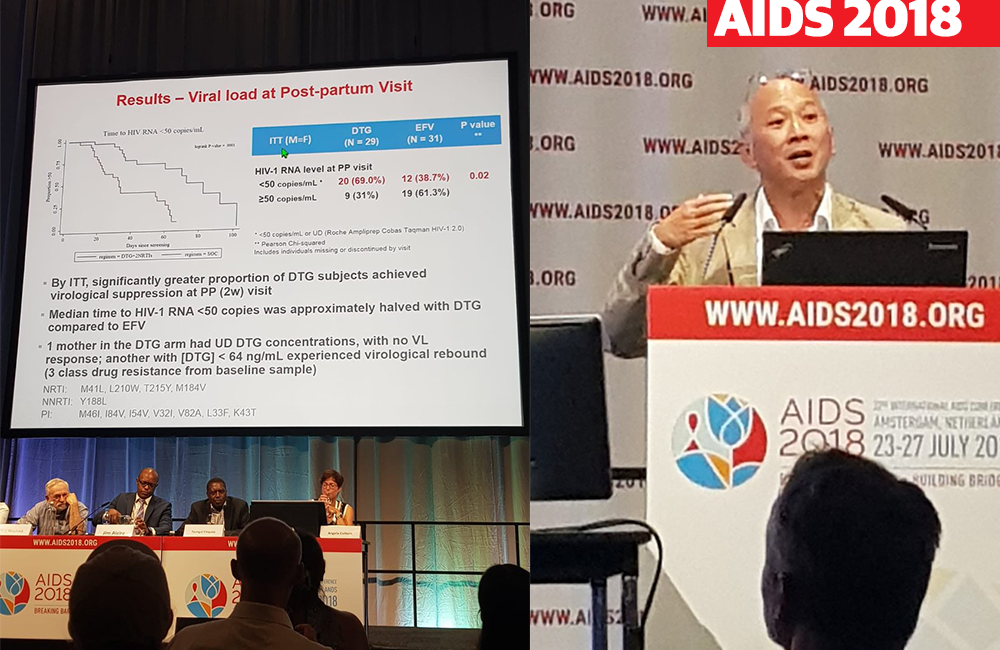 Findings from this randomised controlled pilot study provide a potential means to reduce mother-to-child transmission at birth and during breastfeeding for women starting ART in late pregnancy.

Approximately 1.5 million women living with HIV become pregnant each year, 90% of whom live in resource-poor settings and who continue to present late (third trimester) in their pregnancy with untreated HIV. In South Africa around one in five pregnant women living with HIV start ART late. Starting ART in the third trimester is associated with failure to achieve viral suppression (< 50 copies/ml) by delivery, which is critical for prevention of mother-to-child transmission. Starting late is associated with a sevenfold increased risk of mother-to-child transmission, as well as a doubling of infant death in the first year.

The primary endpoint in this study was the pharmacokinetics (drug absorption, distribution, and excretion) of DTG in women and breastfed infants two weeks after delivery, while secondary endpoints included viral suppression at delivery as well as the safety and tolerability of DTG in pregnant women and their infants.

A scheduled interim analysis after the first 16 (eight on DTG) delivered, presented at CROI 2018, (poster #807) found DTG to be safe and confirmed that DTG exposure in the third trimester did not warrant a dose increase. The analysis also confirmed that mothers who start ART in late pregnancy are a vulnerable group who may have a higher rate of treatment failure.

In compliance with national guidelines (starting women on ART on the day diagnosed), standard of care EFV + two nucleoside reverse transcriptase inhibitors (NRTIs) began on referral with randomisation to continue standard of care or switch to DTG + two NRTIs a median of three (IQR:1-8) days later. In Uganda, the NRTIs comprised tenofovir and lamivudine and in South Africa, tenofovir and emtricitabine. DTG and EFV dosage was 50mg and 600mg daily, respectively.

Viral load was monitored at every visit. Intensive maternal pharmacokinetics sampling was done (0.5,1, 2, 3, 4, 6, 8 and 24 hours) after two weeks on DTG and two weeks after delivery, with paired sampling between maternal plasma and cord blood, breast milk and infant plasma. All infants were breastfed.

In just over a third of the women (9/28) DTG exposures in the third trimester were low with concentration levels (Ctrough) at or below the minimum effective concentration of 324ng/ml.

Significant infant exposure, possibly continuing through breastfeeding, was due to DTG transfer across the placenta (122%) and in breast milk (3%) together with delayed drug elimination.

There were no HIV transmissions.

The regimens were well tolerated.

Ninety-five per cent  (57) had normal healthy births with comparable infant outcomes. The median duration of pregnancy at birth was 38 weeks with a median infant weight of three kilogrammes.

Limitations include the small sample size, relatively short follow-up and prior EFV use in all mothers (subsequently randomised to DTG) starting ART, although the safety of DTG and EFV was comparable.

DolPHIN-2, comprising 250 women, a randomised comparison of starting ART in the third trimester with DTG compared to EFV, will further evaluate these findings.

What Botswana Can Teach the World About Solving a Health Crisis