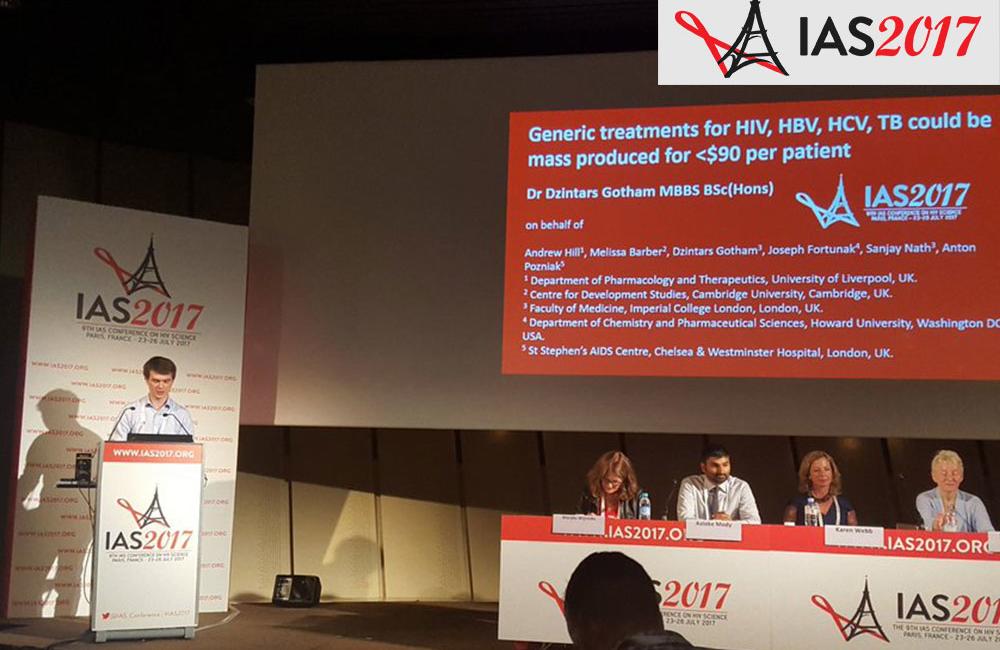 HIV, hepatitis B and C and tuberculosis (TB) can each be treated for less than $90 a year where generic drugs can be made available, Dzintars Gotham of Imperial College, London, reported at the 9th International AIDS Society Conference on HIV Science (IAS 2017) in Paris on Tuesday.

“One of the jobs of government should be negotiating hard for the best price and not just accepting the price offered.” Dr Margaret Hellard

The findings come from an analysis of the prices paid for the raw materials that are used to make drugs for the treatment of each disease, and the costs of manufacturing each product.

Although the cost of antiretroviral treatment has fallen dramatically since generic manufacturers first began to manufacture versions of antiretroviral drugs in India in 2001, generic products have not been available in all countries due to patent restrictions. Over the next few years it will begin to be possible to provide first-line treatment for HIV using generic drugs as patents expire on some of the key drugs used in HIV treatment.

The cost of treating other diseases remains extremely high in most countries, and is affected not only by patent restrictions, but also by the ability of governments to negotiate competitive prices. Dr Gotham said that the cost of treating hepatitis C with a 12-week course of sofosbuvir and daclatasvir ranges from $108 in India and $174 in Egypt, to $11,598 in Australia, $29,361 in Brazil and $47,972 in Argentina.

To achieve global targets for HIV treatment and viral suppression, hepatitis C elimination and reducing the burden of TB and drug-resistant TB, large increases in the number of people treated for each disease will be necessary. Cutting the prices paid for medicines will be essential if countries are to afford large treatment programmes for HIV or viral hepatitis.

In particular, countries that are seeking to move to treat-all targets will have to have keep up with the growth in newly-infected people, Dr Andrew Hill of Liverpool University told a symposium on how to reduce drug costs. The number of people who will need HIV treatment is likely to grow at a rate of 800,000 a year, from 30 million in 2017 to 36.4 million in 2025, he pointed out, while the current rate of hepatitis C infections means that the global burden of disease will remain the same at current treatment levels up to 2030, the target date for elimination of hepatitis C.

To find out what scope might exist for further price reductions, Dzintars Gotham and researchers from Howard University, Washington DC, St Stephen’s AIDS Trust, London, the University of Liverpool and the University of Cambridge looked at costs of shipments of active pharmaceutical ingredients (API), the raw material of drug manufacture, in and out of India.

Until November 2016 information on the value of shipments of APIs was freely available from the India customs service. The research group used these costs and added manufacturing costs calculated from a range of published and unpublished sources, and added a 10% profit margin. Their prices did not include the costs of bioequivalence studies for regulatory approval or transport.

They compared their calculated costs to the lowest prices currently available from generic manufacturers according to the Médecins Sans Frontières 2016 guide to antiretroviral drug costs.

High-quality regimens for the treatment of each disease can now be produced for less than $90 per course of treatment or per year, and there is no need for governments or donors to pay more, provided that intellectual property restrictions can be overcome. Countries and donors should aim for a new $90-$90-$90 target on HIV, viral hepatitis and TB drug prices if the current global targets for disease elimination are to be achieved, he concluded.

The lack of accurate information on current prices – and potential future prices – is deterring governments and donors from scaling up treatment for hepatitis C, speakers at the symposium on drug pricing agreed.

“Donors need to understand just how cheaply these drugs can be made. It’s misleading for Gilead to say that they can offer sofosbuvir for $900 when we’ve shown that it can be made for $90,” said Andrew Hill.

“One of the most important things we have to do is re-frame [the debate about hepatitis C drug prices]. The focus on $1000 a pill has done us a disservice with donors. We need to be talking about a $150 course of treatment,” said Dr Margaret Hellard of the Burnet Institute, Melbourne

Governments also need to adopt a tougher stance in price negotiations and start thinking in terms of their strategic aims for public health, several panellists argued.

“One of the jobs of government should be negotiating hard for the best price and not just accepting the price offered,” said Margaret Hellard. “We need our governments to make strong and brave decisions on behalf of their people.”

The impact of COVID-19 on HIV, TB and malaria services and systems for health

UNAIDS and WHO have supported mathematical modelling to establish the benefits of continuing HIV services compared to the potential harm of additional COVID-19 transmission.
World Health Organization
14 Apr 21
Cancer

Helping my longtime friend Jeremy find such trials alerted me to this ongoing problem—which will only be reversed if patients, doctors, and trial reviewers keep pushing back on Pharma.
TheBodyPro
12 Apr 21
Migrants, refugees & displaced people

A journey across two continents and four countries to some of Latin America’s most dangerous places reveals a humanitarian crisis that can no longer be ignored.
Out
6 Apr 21
Access to healthcare

Over a million additional cases of tuberculosis (TB) went undiagnosed and untreated in the last year due to the impact of COVID-19-related lockdowns, significantly setting back the global effort to end TB by a massive 12 years, according to new data.
Health-e
19 Mar 21
More editors' picks