Acute kidney injury ‘uncommon’ but unpredictable on tenofovir and ritonavir 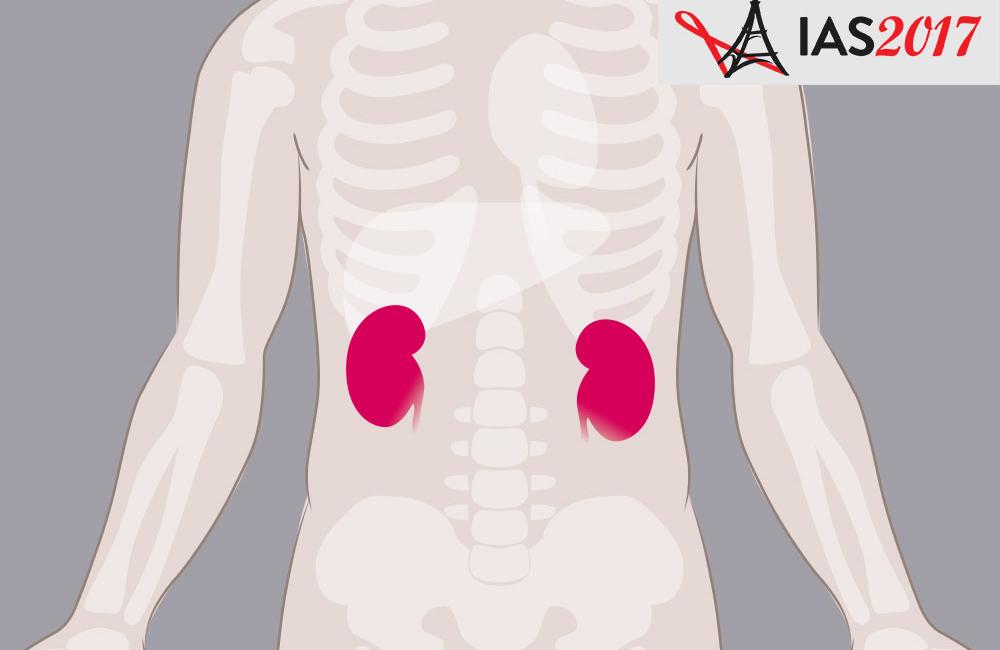 Doctors need to monitor patients regularly for kidney function if they are taking tenofovir disoproxil, especially if combined with ritonavir, the 9th International AIDS Society Conference on HIV Science (IAS 2017) heard this week.

Fanconi syndrome is an acute type of kidney failure caused by leakage out of the blood into the urine of substances that should normally be reabsorbed: phosphates (which help build bone), amino acids and bicarbonate, which raises the acidity of the blood (acidosis) to dangerous levels.

“All these cases could have been spotted with a cheap urine dipstick test at every HIV checkup.” Dr Nicholas Medland

Dr Nicholas Medland of Monash University in Melbourne, Australia told delegates that Fanconi syndrome was “uncommon, but not rare” with 1.25% (one in 80) of his cohort of patients developing it within a ten-year period. Importantly, it could appear unexpectedly, in patients with no characteristics linked to kidney disease.

In another presentation, Dominique Costagliola of the French national medical research agency INSERM told delegates she had found no association between tenofovir, or any other HIV drug, and the risk of bone fractures of the type associated with low bone mineral density.

Dr Medland studied a cohort of 1044 patients who started and continued taking tenofovir disoproxil between 2002 and 2016, 398 of whom were also taking ritonavir as a booster for protease inhibitor drugs.

Their average age was 38 (ritonavir takers 41) and 88.5% were male and 75% gay men. The average time taking tenofovir was 3.5 years, or four years in those also taking ritonavir.

One average, patients had normal kidney function when they started tenofovir (eGFR = 106) and only 2.5% had kidney malfunction as defined by an eGFR below 50 (1.6% of those also taking ritonavir).

There were 13 cases of Fanconi syndrome in 1044 patients (1.25%) and the annual incidence was 1 case in 920 patients per year (0.11%). The average time patients spent on tenofovir before Fanconi syndrome developed was 5.5 years.

Nine out of the 13 cases were also taking ritonavir, and the annual incidence in these patients was 1 in 182 patients per year (0.55%). Ritonavir co-administration raised the risk of Fanconi syndrome nearly fivefold (adjusted hazard ratio, 4.71).

“All these cases could have been spotted with a cheap urine dipstick test at every HIV checkup,” said Dr Medland, urging continued monitoring even in patients with perfectly normal kidney function.

Tenofovir disoproxil has been associated with low bone mineral density and osteoporosis, as have protease inhibitors, but does this translate into a higher risk of bone fractures?

To answer this question, Dominique Costagliola looked at the French HIV Hospital Database, which contains the majority of people with HIV attending clinics in the country. Between 2000 and 2010, she found 1026 fractures in 62,776 patients. However, only 261 of these had evidence of “low energy” fractures, i.e. fractures associated with impacts that should not normally break bones, such as falls from standing height, and at skeletal sites where osteoporosis most often occurred.

She matched 254 of these patients with 376 control patients who had the same age, sex, length of HIV diagnosis, and if possible attendance at the same clinic. The average age of these 630 patients was 49, two-thirds were men, about two-thirds were diagnosed before 1997, and about 40% started antiretroviral therapy (ART) before 1997. Seventy per cent started ART before 2001.

There were 38 control patients and eight with fractures who were never on ART between 2000 and 2010.

Costagliola then looked at the relationship between specific HIV drugs and the risk of fracture. In terms of whether drugs had been used at all, protease inhibitors were associated with a 67% increased risk of fracture, and the individual protease inhibitors atazanavir and lopinavir (in Kaletra) with a similar raised risk. In terms of duration of cumulative use, the only drug with a significant association with fracture was atazanavir.

However, in a model that adjusted for all other risk factors, no HIV drug was associated with the risk of fracture. Tenofovir was, in this model, associated with a 24% raised risk, but this was a trend rather than being statistically significant.

Efavirenz was associated with a 40% reduced risk of fracture in this model, but this again was only a trend rather than being statistically significant.

Costagliola said she had found no definite association between any ART drug and fracture, but also noted that because this was a patient group who had started ART early, only 9% had tenofovir in their first ART regime. Similar studies of cohorts starting ART later should therefore be done in the future to see if it is associated with fracture, especially as patients age.