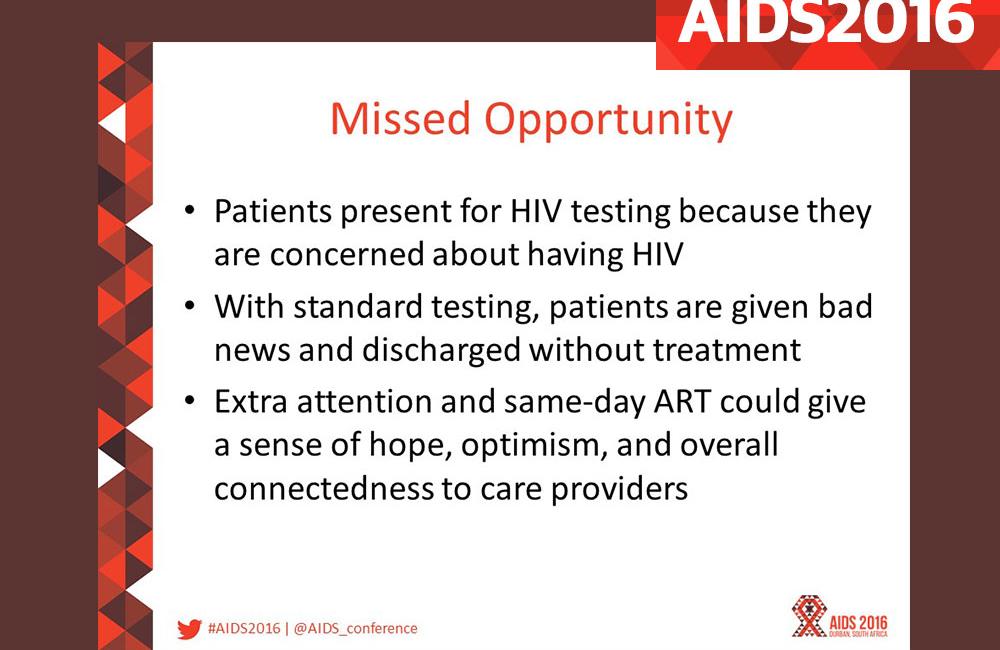 Interventions to improve linkage to care and retention in treatment which speed up the start of treatment or provide intensive support to people before starting treatment produce better retention in care than standard practices, researchers reported at the 21st International AIDS Conference (AIDS 2016) in Durban, South Africa, on Wednesday.

Starting HIV treatment on the day of diagnosis resulted in significantly better outcomes for people in Haiti, while a package of interventions including accelerated antiretroviral therapy (ART), CD4 counts at diagnosis and intensive support delivered in Swaziland resulted in significantly better linkage to care and retention after one year on ART, the studies showed.

Same-day treatment initiation has been proposed as a way of reducing the loss of patients between HIV diagnosis and ART initiation. People diagnosed with advanced HIV disease are at high risk of illness or death if they become lost to follow-up or delay starting treatment, and untreated people may pass on HIV to partners.

Same-day initiation is also designed to tackle the psychological ill-effects of an HIV diagnosis, which may also contribute to patient loss before treatment can be started.

“With standard testing protocols people are sent away with bad news. Our hypothesis was that if we rolled out the red carpet on that very challenging first day, we would give hope,” said study investigator Dr Serena Koenig of Brigham & Women’s Hospital, Boston.

The randomised study was conducted at the GHESKIO research centre and clinic in Port-au-Prince, Haiti. Researchers recruited individuals who tested positive for HIV and who had WHO (World Health Organization) stage 1 or 2 disease and a CD4 cell count below 500 cells/mm3. The study excluded people with chest X-rays suggestive of TB or pneumonia, to give more time for investigation, and also excluded anyone who displayed lack of readiness for treatment on an ART readiness questionnaire.

The study randomised 762 participants to receive either the existing standard of care (ART initiation after a third follow-up visit at day 21 post-diagnosis) (n = 384) or same-day ART initiation (n = 378). The analysis comprised 564 people with at least 12 months of follow-up (n = 564). All study participants received CD4 counts, an ART readiness questionnaire, multiple clinic and counselling visits in the first month, monthly visits thereafter, community health worker follow-up in the case of missed visits, and USD1.70 per visit in transport subsidy. The only difference between the study arms was the time of treatment initiation.

The study showed that same-day ART initiation is feasible in Haiti and results in improved retention in care and virologic suppression, as well as providing people with a sense of hope, optimism and connectedness to health care providers, Dr Koenig concluded.

However, it is worth noting that around one-third of people screened for enrollment in this study were deemed not ready to start treatment after undergoing a standardised questionnaire on readiness for treatment, indicating that same-day treatment is not suitable for everyone and that a substantial minority of people will need more preparation and support. The finding also indicates the importance of asking people about their readiness for treatment and of addressing barriers to starting treatment before dispensing pills, rather than waiting to address problems of retention in care or non-adherence when lack of readiness translates into subsequent difficulties.

The Link4Health cluster-randomised trial was designed to test the impact of a combination of interventions on linkage to care one month after diagnosis and retention in care 12 months after diagnosis.

Ten clusters of affiliated HIV care facilities in Swaziland were randomised either to receive the existing standard of care or to receive a combination of interventions consisting of:

The study enrolled 2201 participants (59% women) from August 2013 to November 2014 and followed them for at least one year. The primary study outcome was linkage to care within one month of HIV diagnosis, and retention in care (HIV clinic visit within 12 months) (a composite outcome). ART initiation was measured as a secondary outcome.

The study found no significant difference in the effectiveness of the combination intervention according to age, sex, distance to clinic or clinic type.