New strategy aims to end AIDS in children by 2020 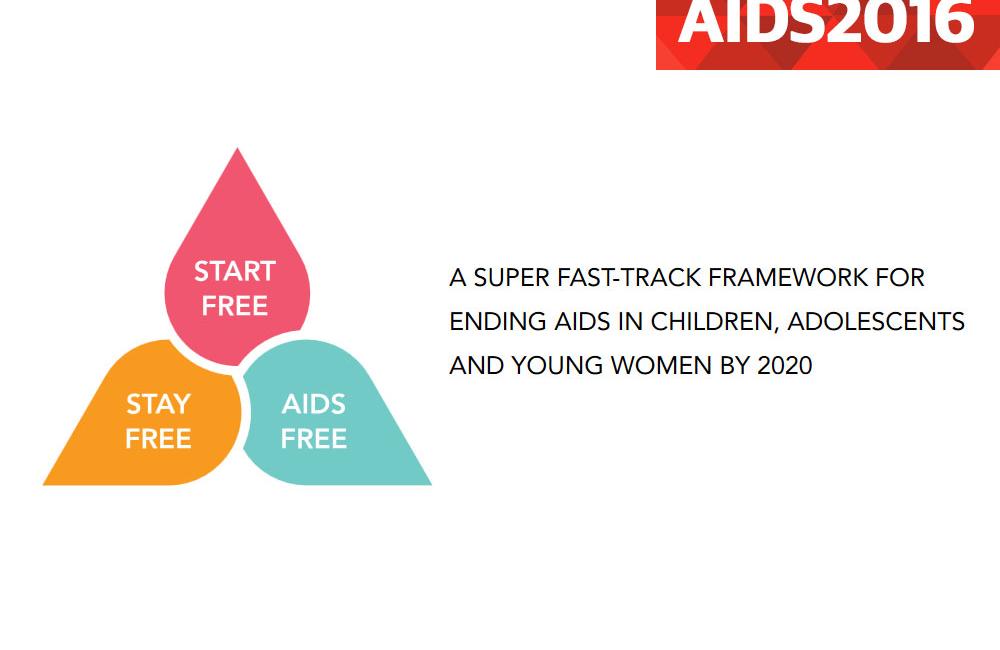 A new strategy to end paediatric AIDS launched at the 21st International AIDS Conference (AIDS 2016) in Durban, South Africa, on Tuesday calls for antiretroviral treatment services to reach 1.6 million children and 1.2 million adolescents by 2018. The Super-Fast Track strategy is intended to close the gap between adult and paediatric treatment access, says UNAIDS, and will pull together the actions of numerous agencies.

The strategy is intended to ensure that children and adolescents do not get left behind as treatment programmes strive to achieve the 90-90-90 targets, and recognises that scaling up treatment and diagnosis for children poses particular challenges that require different solutions from those employed for adults.

Ending paediatric AIDS by 2020 may be a realistic goal

Whereas AIDS diagnoses in children have declined dramatically in Uganda, Swaziland and Burundi, and other countries including Thailand have already virtually eliminated mother-to-child transmission of HIV, achieving the goal of ending AIDS in children will require special efforts in several high-burden countries including Nigeria, South Africa and India.

As in adults, the HIV treatment cascade is a critical tool for monitoring the success of efforts to bring treatment to children and minimise the risk of paediatric AIDS. Diagnosis, the first step in the cascade, presents its own specific set of challenges in children.

Virologic testing for HIV DNA at 4-6 weeks of age is recommended in all HIV-exposed infants. Point-of-care testing is most likely to ensure that the infant is not lost to follow-up and that treatment can be started promptly. Infants with HIV are at especially high risk of death during the first months of life, but up to half of infants tested for HIV in four countries never received those results, and as a consequence could not receive antiretroviral treatment.

Improving access to infant diagnostic tests is essential for achieving the first 90 for children. Coverage of early infant diagnosis tests has improved dramatically in several countries since 2012, but even in some of the best-improving countries such as Zimbabwe and Mozambique, only half of HIV-exposed infants were tested in 2015, UNAIDS estimates.

“We needed to reduce the cost, and to make it friendlier. That’s why we have been working with a number of manufacturers to see if we can develop point-of-care diagnosis. Today, we have technology that is available through two companies that makes early infant diagnosis at the point of care possible. We have been able to reduce the price with a partnership with Roche and we are trying to push for competition to lower the price.”

Roche cut the price of its early infant diagnostic test to $9.40 per test in 2015 after negotiations with the Diagnostics Access Initiative, formed to reduce the cost of viral load testing.

If diagnosis is missed in infants, or if HIV-exposed infants are not tested at the end of the breastfeeding period, children can go for years without HIV diagnosis due to lack of healthcare provider-initiated testing.

“We’ve focused on early infant diagnosis but the yield we have achieved through that is very low and data coming from countries says we should be looking elsewhere. Provider-initiated testing has got to be part of this,” Chewe Luo of UNICEF told a meeting organised by WHO on Monday.

Provider-initiated testing needs to include opportunities to test outside medical facilities. Lesotho’s health minister Dr Molotsi Monyamane told the paediatric strategy launch that national policy has been changed to allow lay counsellors to test children at community-based facilities, and mobile outreach services are providing under-five and maternal-child health services that include HIV testing.

Making HIV tests a routine part of child health care would go a long way to improving HIV diagnosis for children, and community-based campaigns such as Lesotho’s `Know Your Child’s Status’ are also needed to ensure that children can be diagnosed before HIV disease progression. TB clinics are an important site for diagnosing adolescents: Francesca Celletti of EGPAF reported results on the yield of positive diagnoses at different types of EGPAF-supported sites in Kenya, showing that TB clinics are vastly more likely to identify adolescents with HIV than other testing sites, underlining the importance of adolescent-friendly TB services.

WHO recommended immediate treatment initiation for all children under the age of five diagnosed with HIV regardless of CD4 cell count in 2015. Ren Minghui of WHO told the paediatric strategy launch meeting on Tuesday that almost all high-burden `Fast Track` countries have already switched to treating all children regardless of age, or will do so later in 2016.

Although treatment coverage worldwide is higher among children than adults, UNAIDS estimates that the number of children on treatment will need to increase by at least 83% (approximately 730,000 enrolled on treatment) by 2020 to achieve an end to paediatric AIDS. As well as delays in diagnosis, there are also challenges in linking children to treatment, not least a lack of facilities able to provide treatment for children.

Simplifying treatment for children is essential both for delivery of treatment at facility level and for achievement of the third 90, viral suppression. Despite considerable work to make paediatric formulations easier to dose, the range of antiretroviral products for children is still limited and only one fixed-dose combination is available for children. Pellets that can be sprinkled onto food are an important means of helping younger children to take medication, but so far only one product – lopinavir/ritonavir – is available in this form. The Drugs for Neglected Diseases Initiative is working with the Indian manufacturer Cipla to develop two four-drug combinations for children in the form of oral pellets, and hopes that products will be available by 2018. The products will combine lopinavir/ritonavir and lamivudine with either abacavir or zidovudine.

Viral suppression remains more challenging in children than in adults, due in part to adherence difficulties but also due to the continued use of sub-optimal drug combinations containing nevirapine. Children with HIV who acquire nevirapine resistance as a result of maternal treatment failure, either at delivery or during breastfeeding, will continue to have reduced sensitivity to nevirapine, and limited use of the recommended alternative regimen containing lopinavir/ritonavir often leads to treatment failure in these children.

Just as for adults, innovations in service delivery can improve retention in care, whether it is through family-centred appointment systems, nurse-led clinics or incorporation of peer support into clinical services. Decentralisation of services to bring them closer to families has been shown to improve retention in care in a study of five African countries, cutting loss to follow-up by between half and three-quarters.

“We are not putting the right resources into paediatric treatment. We have the means to end it once and for all, so why are we not prioritising HIV treatment for children. Here we have an ethical and a moral imperative, and we also need to be more longsighted and see that even though these children are a small number [relative to the adult epidemic] they are still the next generation.”