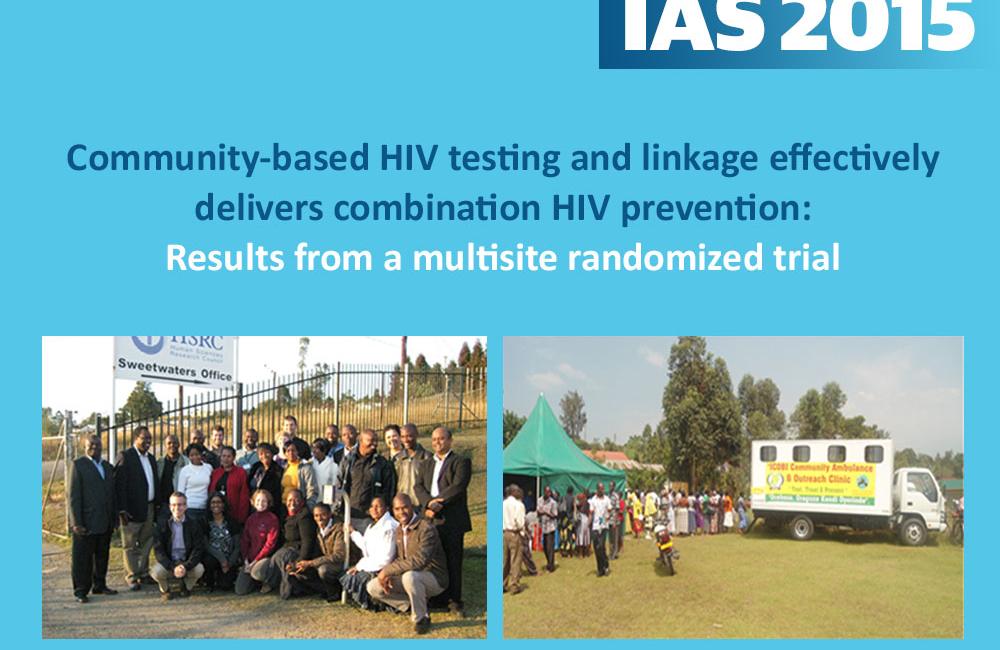 Image from presentation by Dr Ruanne Barnabas, at IAS 2015.

A systematic effort to promote HIV testing, linkage to care for people diagnosed with HIV and circumcision for those testing negative can result in high levels of diagnosis, linkage to care and viral suppression in rural communities, a randomised study of combination HIV prevention conducted in South Africa and Uganda has shown.

The findings were presented by Dr Ruanne Barnabas of the University of Washington Department of Global Health on Monday at the Eighth International AIDS Society Conference on HIV Pathogenesis, Treatment and Prevention (IAS 2015) in Vancouver, Canada.

Efforts to maximise HIV diagnosis through community-based testing provides an important opportunity both for diagnosing people with HIV infection and linking them to care, and identifying people who are HIV-negative and in need of prevention services. Reaching younger men who might benefit from circumcision has been a particular challenge

Several large community-based studies have previously examined how to maximise the uptake of HIV testing and achieve linkage to HIV care for those diagnosed with HIV. Two large multi-disease prevention campaigns, in Kenya and Uganda, showed that it was possible to achieve very high uptake of HIV testing through running time-limited campaigns in a locality, during which people were offered commodities such as water filters or screening for a range of health problems such as diabetes in addition to HIV testing. These studies also examined linkage to care, but did not compare methods of linkage to care.

But there is still a big gap between HIV diagnosis and starting antiretroviral therapy. Large numbers of people diagnosed with HIV either never make it to the clinic to be assessed for antiretroviral therapy eligibility, or else don’t return when told that they are not yet eligible. Efforts to improve linkage to care after diagnosis are critical for preventing a situation where people stay away from medical care until they are sick, and for maximising the number of people who are able to benefit from antiretroviral therapy. Numerous speakers at the conference agreed that improving linkage to care is now one of the most critical challenges facing HIV programmes as they work to achieve the UNAIDS 90-90-90 target.

The Linkages study, developed by the University of Washington’s Department of Global Health, was designed to test a number of different approaches to maximising linkage to care, initiation of antiretroviral therapy and uptake of voluntary medical male circumcision. HIV testing was offered in two communities in rural Kwazulu Natal, South Africa, and rural Sheema district, Uganda.

750 uncircumcised men who tested negative were randomised to one of three interventions promoting medical male circumcision:

The study found that both innovative methods of promoting circumcision resulted in an increase in uptake of approximately 70% when compared to standard of care, with the greatest impact in the first three months after testing.

1325 people who tested positive were randomised twice: the first randomisation was to determine CD4 cell count for treatment staging either by point of care CD4 test, or by referral to the clinic for CD4 testing.

Participants in each arm were then randomised to be linked to care through one of the following methods:

The primary outcome in this study arm was the proportion of participants linked to care, and obtained a staging CD4 test, initiated antiretroviral therapy if eligible, or had a viral load <50 copies/ml within 9 months in the lay counsellor follow-up arm compared to the accompaniment and clinic referral arms.

In the HIV-positive linkage to care randomisation, both lay counsellor follow-up and accompaniment to HIV clinic by lay counsellor were significantly more effective than standard clinic referral in ensuring linkage to care. 98% of people in the clinic visit facilitation arm (p < 0.001) and 93% in the lay counsellor follow-up arm (p < 0.044) were linked to the HIV clinic compared to 89% of those who received standard referral. There was also a significant difference in antiretroviral therapy initiation among those randomised to the lay counsellor follow-up arm, who received therapy initiation and adherence counselling at home. 41% in this arm started antiretroviral therapy, compared to 34% in the standard of care arm (p < 0.028). Clinic visit facilitation did not result in an increased rate of therapy initiation (37% vs 34%, p = 0.260). Although obtaining a staging CD4 count was significantly more likely in those offered a point of care test, there was no difference in the uptake of clinic visits, antiretroviral therapy or viral suppression according to the method of receiving a staging CD4 count.

In fact, the main barrier to antiretroviral therapy initiation appeared not to be related to how people were linked to care, but what happened when they attended the clinic. Only 67% of people eligible for therapy had started treatment within nine months of being randomised. Of those who did not initiate therapy, 45% found the logistics of attending the clinic – including multiple visits and waiting time – defeated them, while 44% were told they were not yet eligible for treatment.

These results show that strategies which make engagement with clinics easier pay dividends in linkage to care and uptake of treatment, but treatment programmes need to look at local priorities for improving linkage to care, said Dr Ruanne Barnabas. “We need to get very granular in how we look at linkage to care,” she concluded.

The results: 79% of enrolled participants restarted their antiretroviral therapy within a week of enrolling, and 55% were virally suppressed after six months.
TheBodyPro
31 Mar 21
Ethnic & cultural minorities

US: Outcomes Disparities Persist for Black Individuals Living With HIV

The most recent Morbidity and Mortality Weekly Report from the CDC shows there is a great unmet need for earlier intervention for and treatment of HIV among Black Americans living in rural areas.
American Journal of Managed Care
22 Feb 21
Retention & linkage to care

On July 27 2020, the U.S. Department of Health and Human Services' (HHS) Health Resources and Services Administration (HRSA) launched a Special Collection of manuscripts across the open-access journals PLOS Medicine and PLOS ONE, highlighting the Ryan White HIV/AIDS Program's innovative approaches for the ngagement of people with HIV who are not in care and not virally suppressed.
EurekAlert
3 Aug 20
More editors' picks