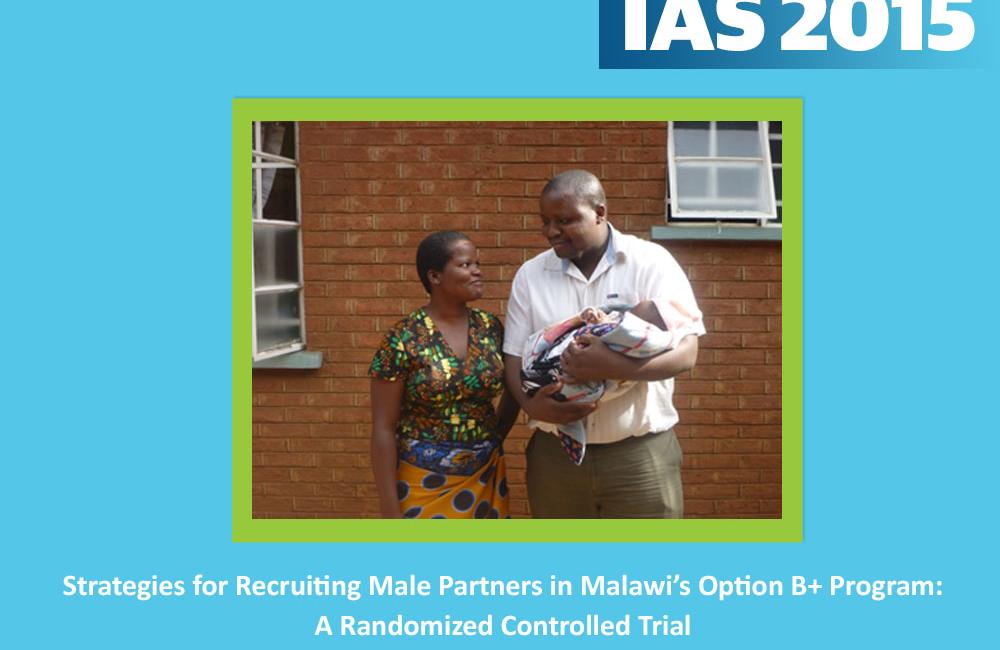 Image from presentation by Dr Nora Rosenberg, at IAS 2015.

Active invitation and tracing of male partners of pregnant women newly diagnosed with HIV substantially increased uptake of couples HIV counselling and testing (cHCT), resulting in close to half the male partners learning they had HIV for the first time. There was also a significant decline from 94% to 23% (p < 0.001) in unprotected sex among HIV-discordant couples in Lilongwe, Malawi, Nora Rosenberg told participants at the Eighth International AIDS Society Conference on HIV Pathogenesis, Treatment and Prevention (IAS 2015) in Vancouver, Canada on Monday.

The strategies comprised invitation-alone and invitation plus tracing by phone or home visit if the couple did not present for couple HIV counselling and testing within seven days.

This randomised controlled trial recruited pregnant women newly diagnosed with HIV from the Bwaila District Hospital Antenatal Unit between March and October 2014. Uptake of couples HIV counselling and testing by male partners was 52% and 74% in the invitation alone and invitation plus tracing arms of the study, respectively, (p = 0.001).

There were no reports of intimate partner violence. Previous findings have been mixed regarding partner violence as a direct result of couples HIV counselling and testing.

Dr Rosenberg suggested that scale-up of an invitation-plus-tracing recruitment strategy within the Option B+ programme (lifelong ART for women living with HIV who are pregnant or breastfeeding) would have important public health benefits.

In spite of a sevenfold increase in the numbers of women starting antiretroviral therapy in 2011, the first year of the implementation of the Option B+ programme in Malawi, significant challenges remain including uptake, retention in care and adherence to treatment. Loss to follow-up at one year has been reported as being as high as 24% compared to an 8% rate in general health.

Rosenberg noted that couples HIV counselling and testing is critical for women with HIV. Their partners may be unaware of their status and in need of diagnosis and treatment or prevention. The potential benefits of mutual disclosure include the opportunity for them to make informed decisions together about HIV prevention and reproductive health including contraception.

Couples counselling and testing has been shown to improve adherence to treatment as well as breastfeeding protocols. It may also increase retention in Option B+ care.

Conversely, non-disclose may prevent access to treatment and care including prevention of mother-to-child transmission (PMTCT) interventions. The lack of male involvement is often cited as a barrier to uptake and retention.

Of the 220 women eligible with a mean age of 27 years, 200 (90%) consented and enrolled. A total of 126 men presented for couples HIV counselling and testing. Of these, 25% already knew they were living with HIV, 47% learned of their HIV-positive status for the first time, and 25% were HIV-negative. There were no differences between the arms (p = 0.8).

At one month follow-up, antiretroviral treatment retention was higher among women in the invitation-plus-tracing arm compared to the invitation-alone arm, 91% and 83%, respectively (p = 0.09).

The invitation-plus-tracing strategy was highly effective in recruiting male partners for couples HIV counselling and testing and more so than the invitation-only strategy. Both strategies succeeded in identifying a large number of men with HIV as well as HIV-discordant couples. Couples HIV counselling and testing resulted in good retention rates, significant decreases in unprotected sex and, importantly, no intimate partner violence.

While male involvement is associated with improved retention and adherence as well as providing the opportunity to discuss HIV and sexual risk, it can result in abandonment as well as physical and psychological abuse. Three women (2%) reported social harms including blame (one) and separation (two). On the other hand, interviews with women suggested that disclosure had deepened the relationship for quite a number of women.

Dr Rosenberg noted study limitations including not adequately knowing the mechanism, a small sample size, a single site, short-term follow-up and only primary partners being involved.

The risk for birth defects among infants born to HIV-positive women using antiretroviral therapy is the same as those born to women in the U.S. general population, according to a 30-year review presented at the Conference on Retroviruses and Opportunistic Infections (CROI) 2021.
POZ
27 Mar 21
Diagnosing children

ICAP is working with the Ministry of Health in Mozambique (MISAU) to ensure that even in the midst of the ongoing COVID-19 pandemic, mothers can take action to stay healthy and give their babies the best chance at starting life without HIV.
ICAP at Columbia University
23 Mar 21
HIV treatment in pregnancy

Local and national governments in west and central African countries must prioritise investment in providing access to HIV testing for all pregnant women.
The Conversation
11 Jan 21
More editors' picks